Hi guys, Alex here one more time to tell everyone all about my day spent at Epcot eating and drinking around the world. The very first time I got the opportunity to visit the Food & Wine Festival was four years ago for my 30th birthday trip. I love it so much that my next trips HAD to be around Food & Wine time (haha I rhymed). So this trip was no exception. 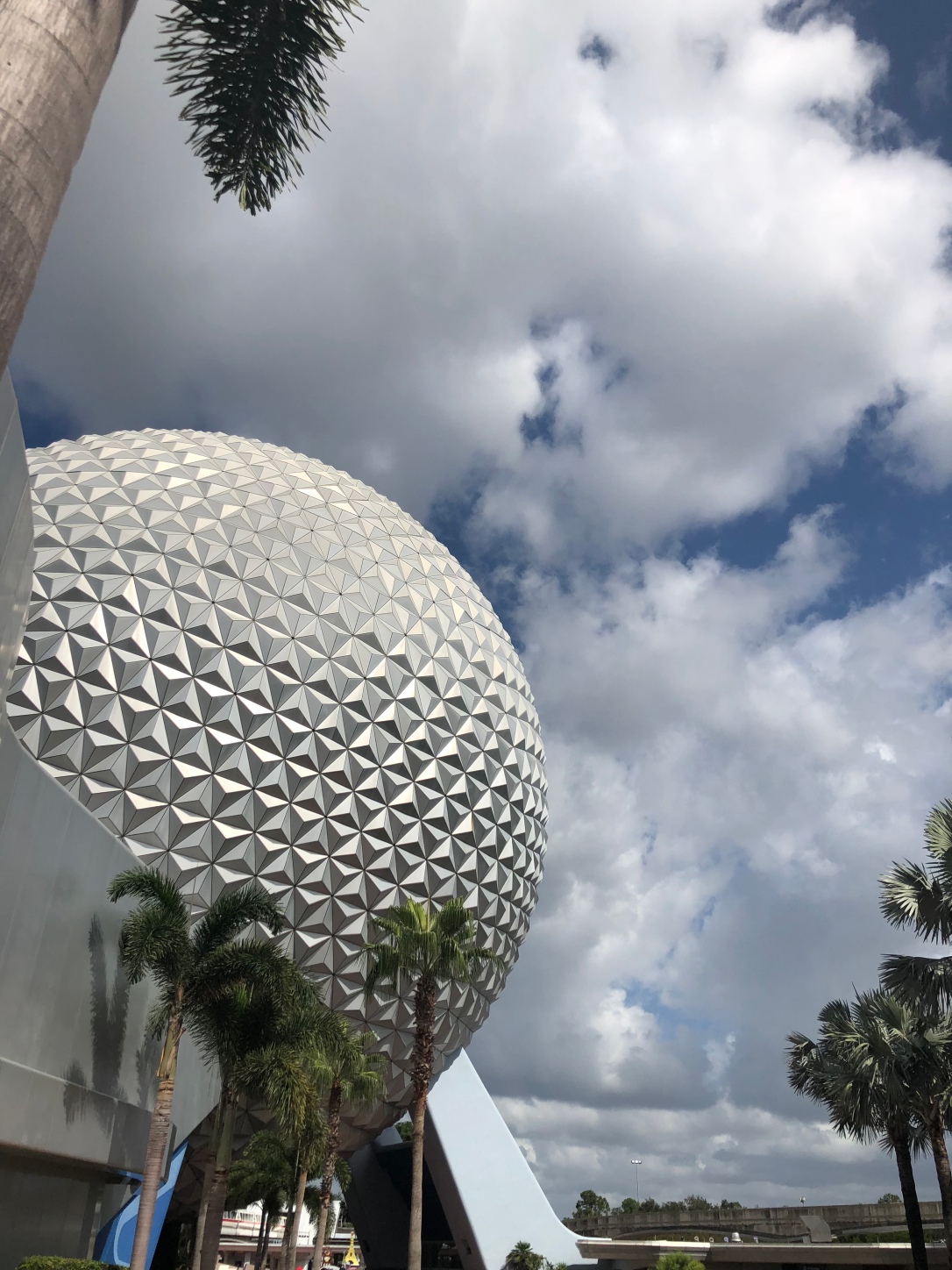 This was my first trip staying at a Walt Disney World Resort in over a decade (I am usually loyal to the Swan & Dolphin). However, when Disney offers a free dining plan in the fall, you jump on it! 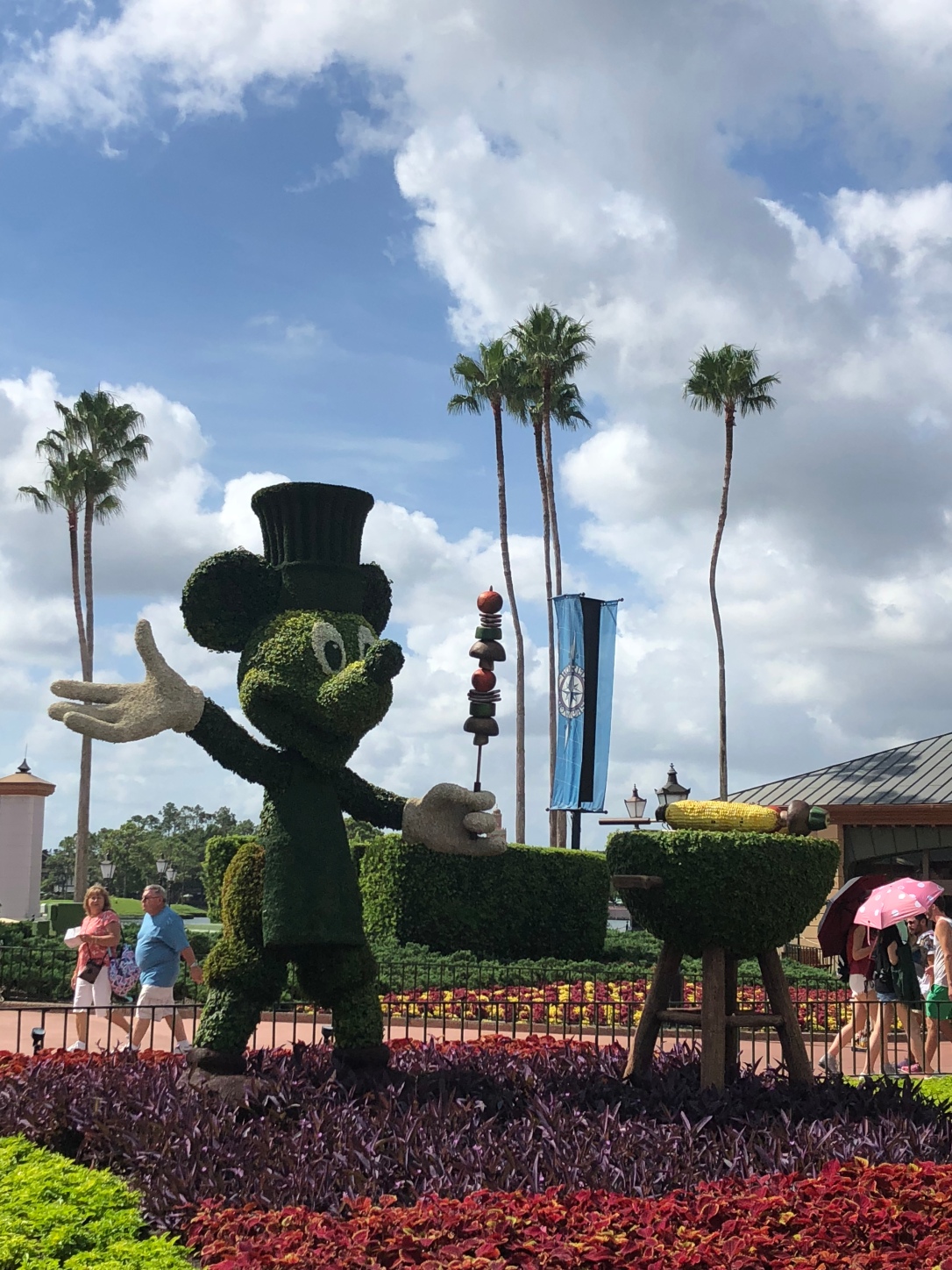 So I saved Epcot for my final day of my trip, mostly so I could save as many snack credits as possible to use at the festival boots. That being said, I also used a meal credit early in the day somewhere I had not been in years: Garden Grill. I recently discovered that I am gluten sensitive and heard that Garden Grill was one of the better restaurants for gluten allergies. My rationale was, if I was good during breakfast and lunch, I could afford a little bit of gluten later in the day with the Food & Wine Festival booths. It had been a long time since I had been and I honestly forgot that it was a family style service. It was so good! The server brought me out my own special French fries that were fried in an entirely different spot of the kitchen where no gluten comes into contact with anything else, gluten free dinner rolls, my own separate mashed potatoes as well as the typical meats and veggies. Sadly I didn’t get any gravy as that I imagine is thickened with flour but honestly their meats were cooked so perfectly I didn’t need it. 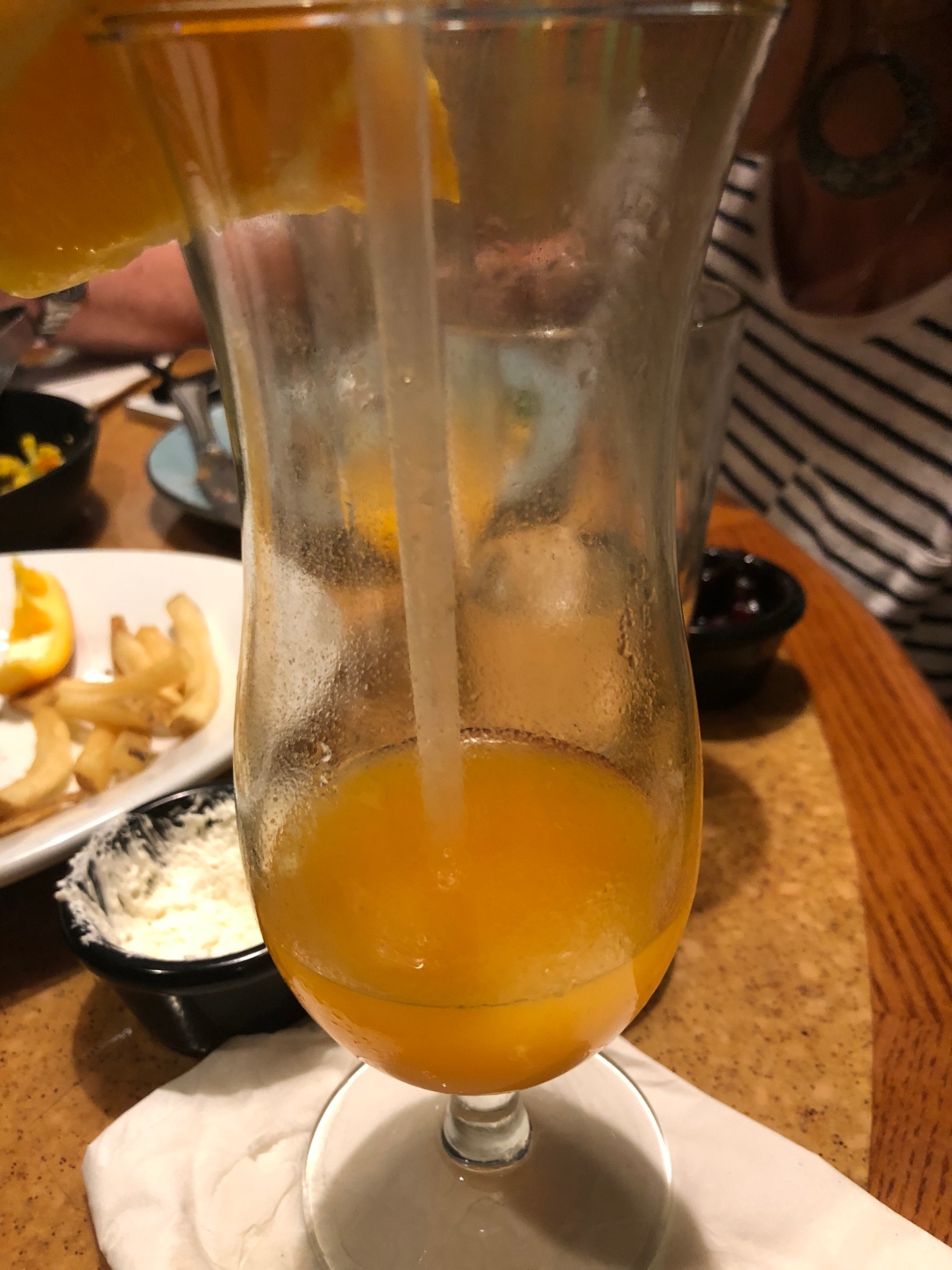 After lunch and obviously a trip around the world via Soarin, I made my first stop of the day at the Light Lab. I had intended to get the Bleu Spectrum but after all the food and alcoholic beverages at Garden Grill I knew I needed to pace myself. I went with the Phosphorescent Phlight instead (non-alcoholic). They were all really nice and refreshing and good to share. 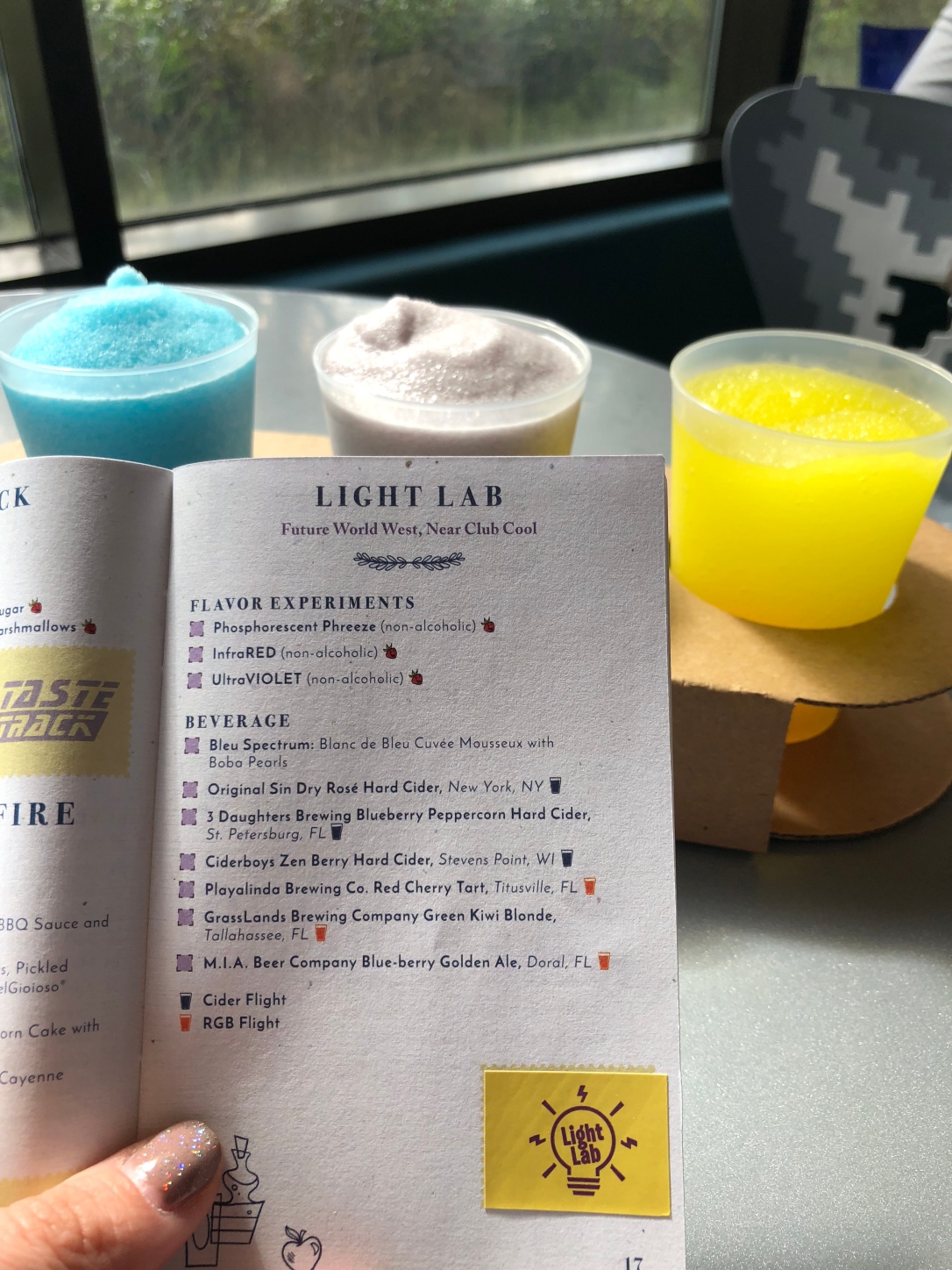 We started out World Showcase journey in Mexico, and while still semi-full and knowing there are SO MANY amazing Mexican food restaurants near my house, I opted not to get any snacks in Mexico.

From there we stopped by Norway so my father could see what has become of his all-time favorite ride, Maelstrom. I was waiting his reaction to be negative (I guess that says more about me than it does him) but he loved it! I guess it helps that they kept the same boat track and just changed the characters around a bit.

Next stop: China! At this point my tummy was having a mild rumble and as I was there with both of my parents it is so much easier to try things when it’s not just you eating. So I shared the Chicken Dumpling and the Black Pepper Shrimp dishes. Now, I know what you could be thinking if there’s a lot of Mexican restaurants near you, aren’t there Chinese restaurants near you as well, Alex? The answer is yes, yes there are, and good ones, too. But I really love it and had the snack credits from my dining plan to use so why not? 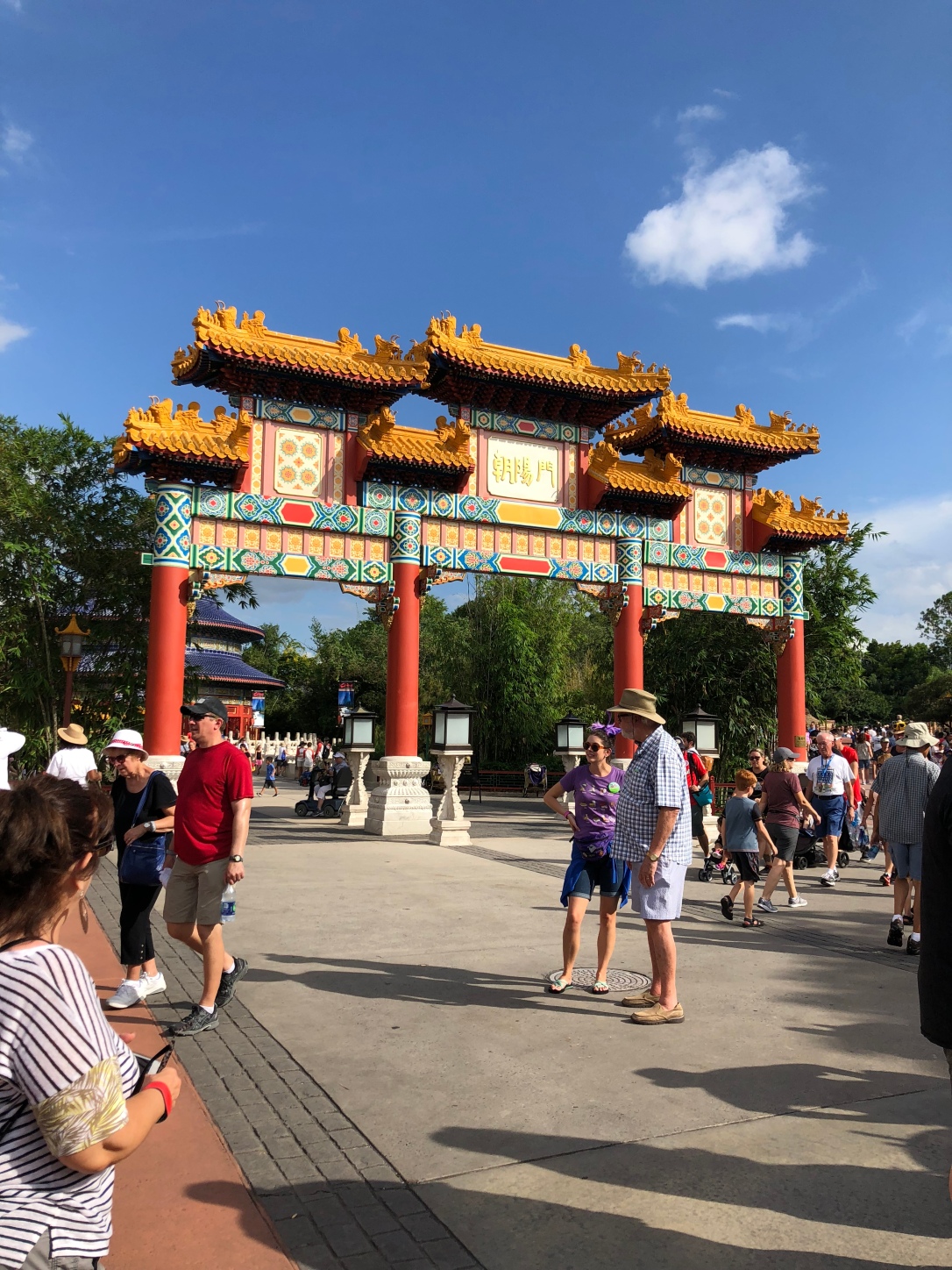 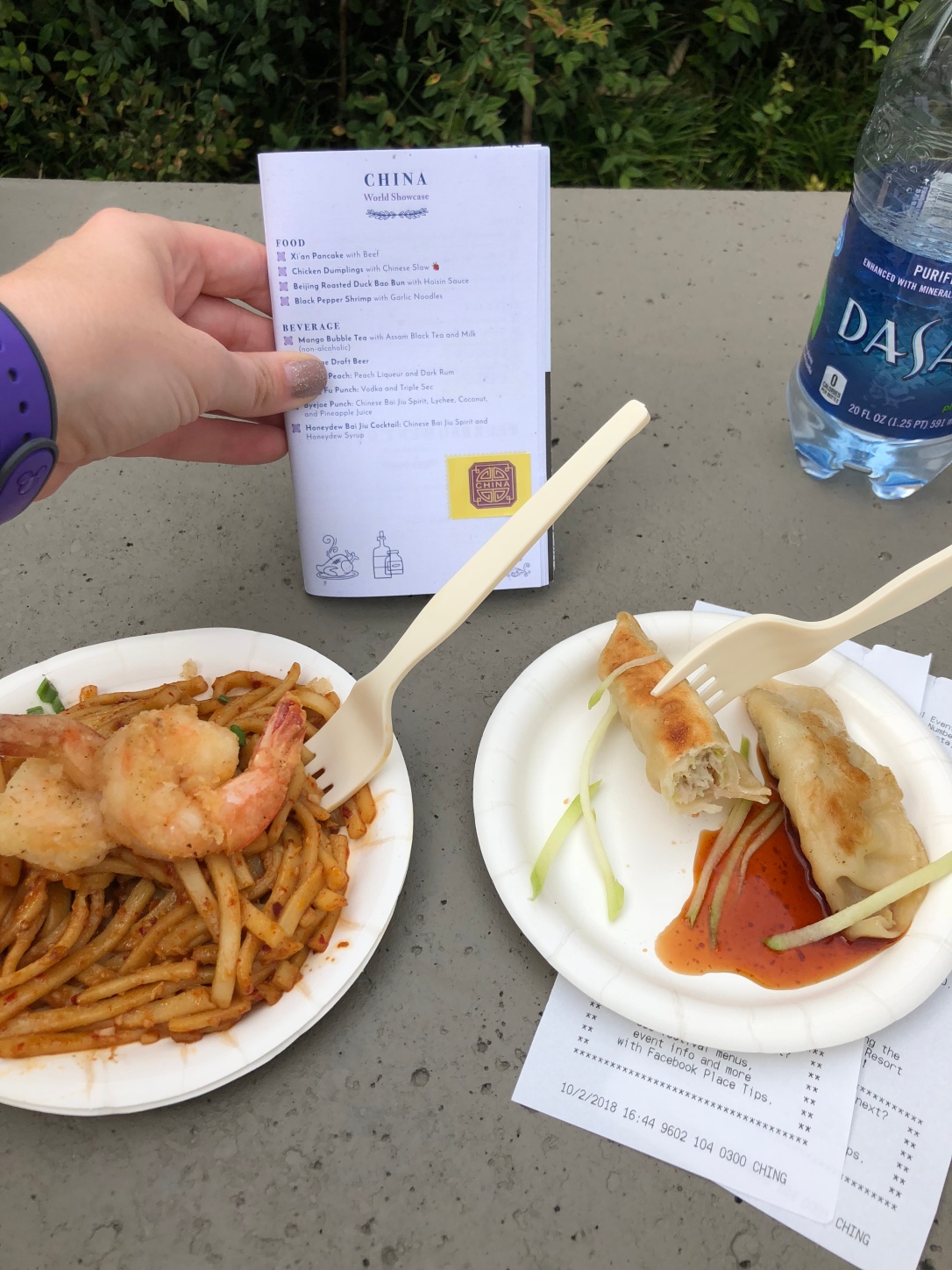 Next on my Food & Wine journey was Spain. This could have been one of my two favorite spots along the entire journey. This included Charcuterie in a Cone and a wine flight. It not only made me feel fancy but tasted SO GOOD! So many of my friends love to tease me saying Disney is for kids and why do I like going all the time. It was at this point that I decided to text my group chat my photo of the charcuterie in a cone and the wine flight. Even my skeptical friends understand good food trumps all. 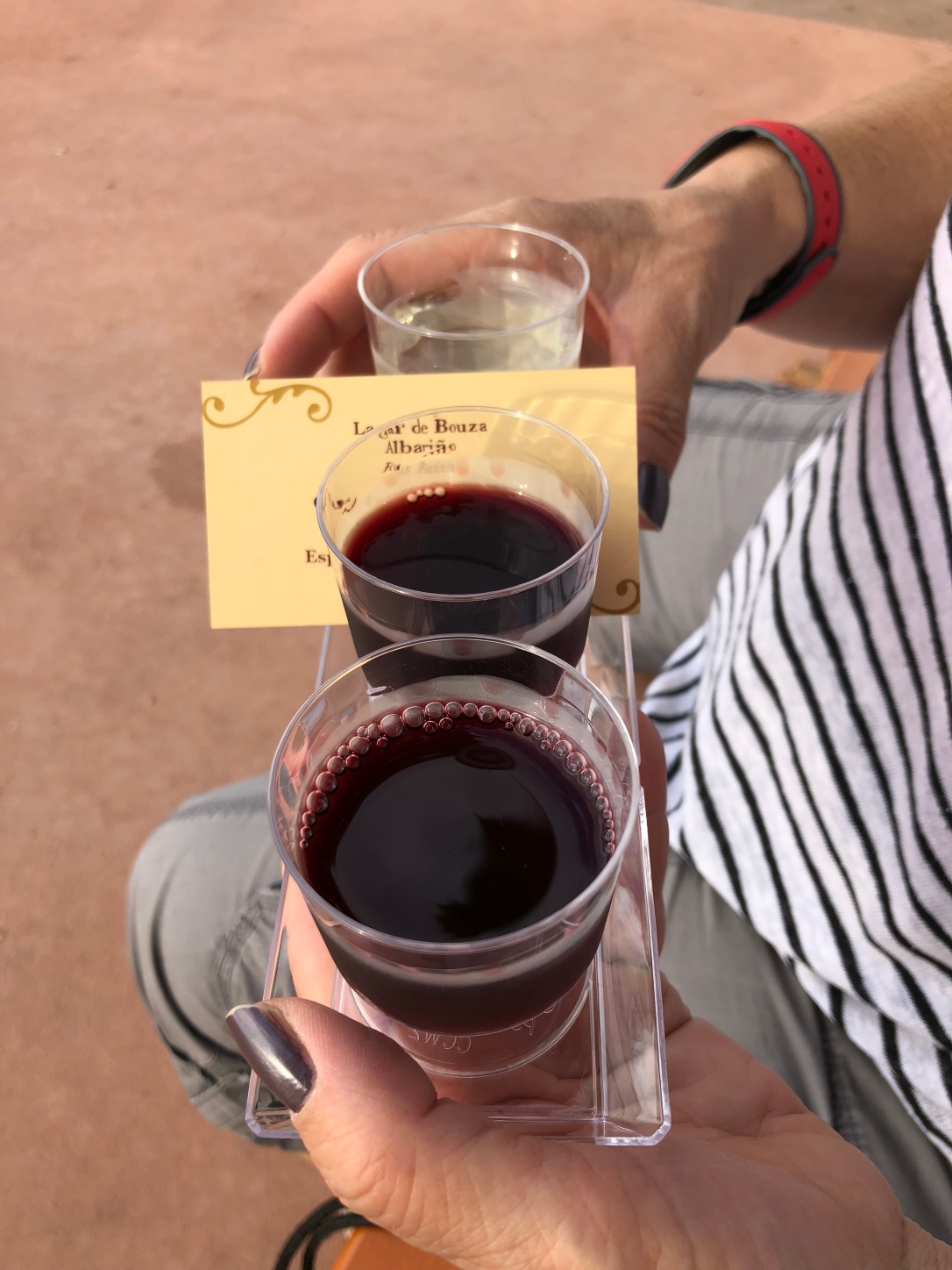 As you may remember from my post 2 weeks ago (if you missed it, you can read it here), my friend was also visiting at the same time and her go-to for Food & Wine has always been the Brazilian cheese bread, pao de queijo. So, seeing as how it is also gluten free, how can one go wrong? Honestly this cheese bread is so amazing I want to find a recipe for it to make at home. My father is a huge seafood fan so he opted with some moqueca, the seafood stew. No one had any complaints and the cheese bread was my second favorite stop of the day.

While it’s not technically specially for Food & Wine, when one is in France one has a crêpe! And one has that crepe with all the ice cream and Nutella on the inside. Not that it wasn’t delicious (because it absolutely was), but there was nothing outstanding about this crepe, it wasn’t made to order just warmed up so maybe that’s where my apprehension comes from.

Next stop along my journey was Ireland with its yummy brown bread and cheese dipping sauce.

Somewhere around this point, I may have begun to regret all these food items but my mentality was: I still have snack credits, I must use them. That being said, I was so happy to indulge one last time with a filet mignon from Canadian pavilion before settling down to watch Illuminations one last time.

My night ended with me drinking a bottle of water to wash everything down and the fireworks show Illuminations, which I will miss dearly. I was so lucky to have spent New Year’s Eve 2000 in Epcot when Illuminations first started, so it holds a special place in my heart.

My final thoughts on Food & Wine festival are that having the dining plan makes this so much more affordable! The past two times I have been, I have had to pay out of pocket for everything I wanted to eat and, while you can still enjoy yourself, it’s so much easier when you don’t have to worry about how much anything costs. And seeing as how you use snack credits and not meal credits, if you find yourself at a time when Disney offers free dining during the fall, take the opportunity and go! 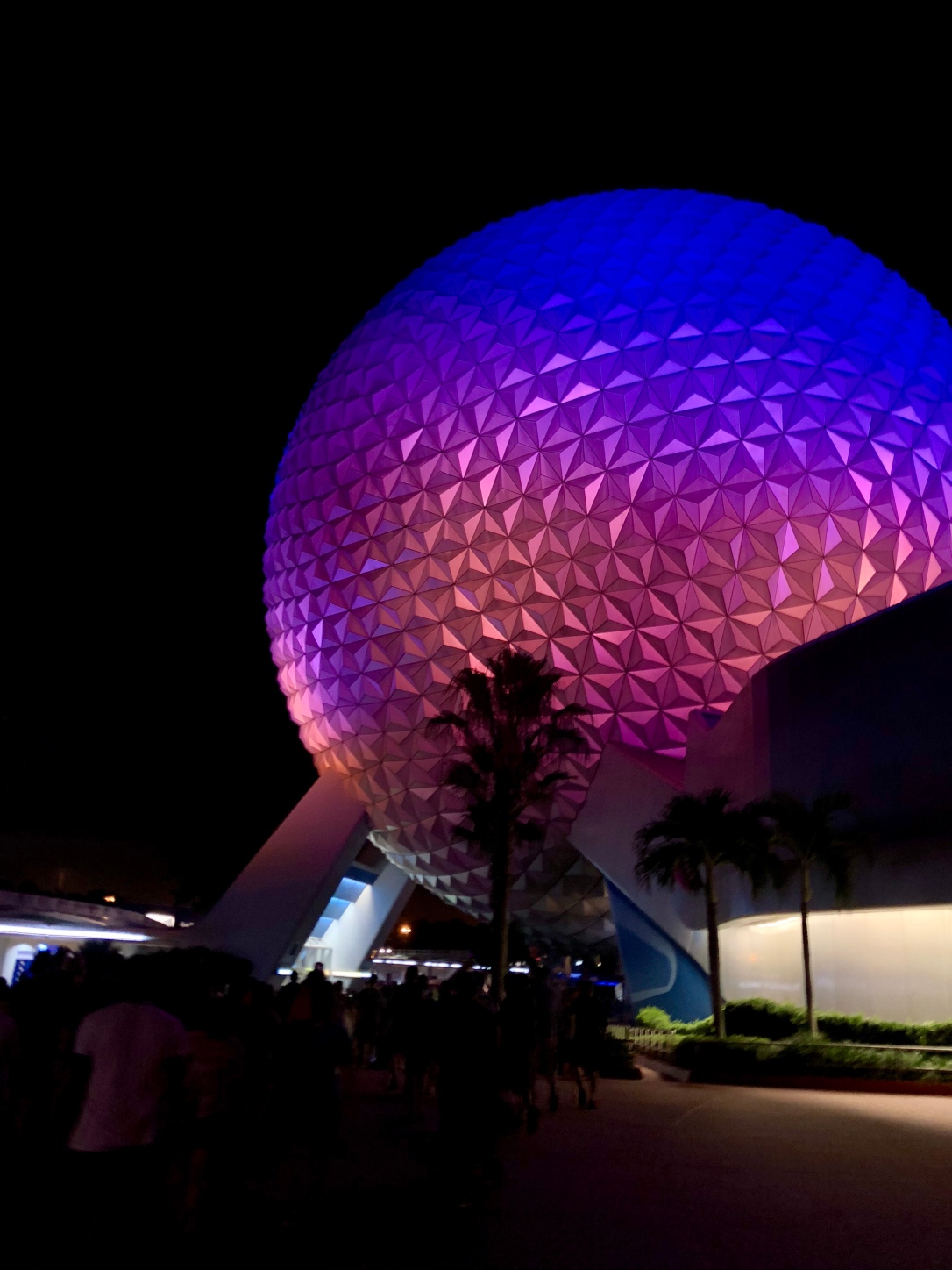 ‘Til next time Disney lovers!