The 4th day of our trip took us to my husband’s favorite park. Since we were staying at Animal Kingdom Lodge, it was the shortest trip we had to any of the parks (and the emptiest bus ride since they come so frequently). 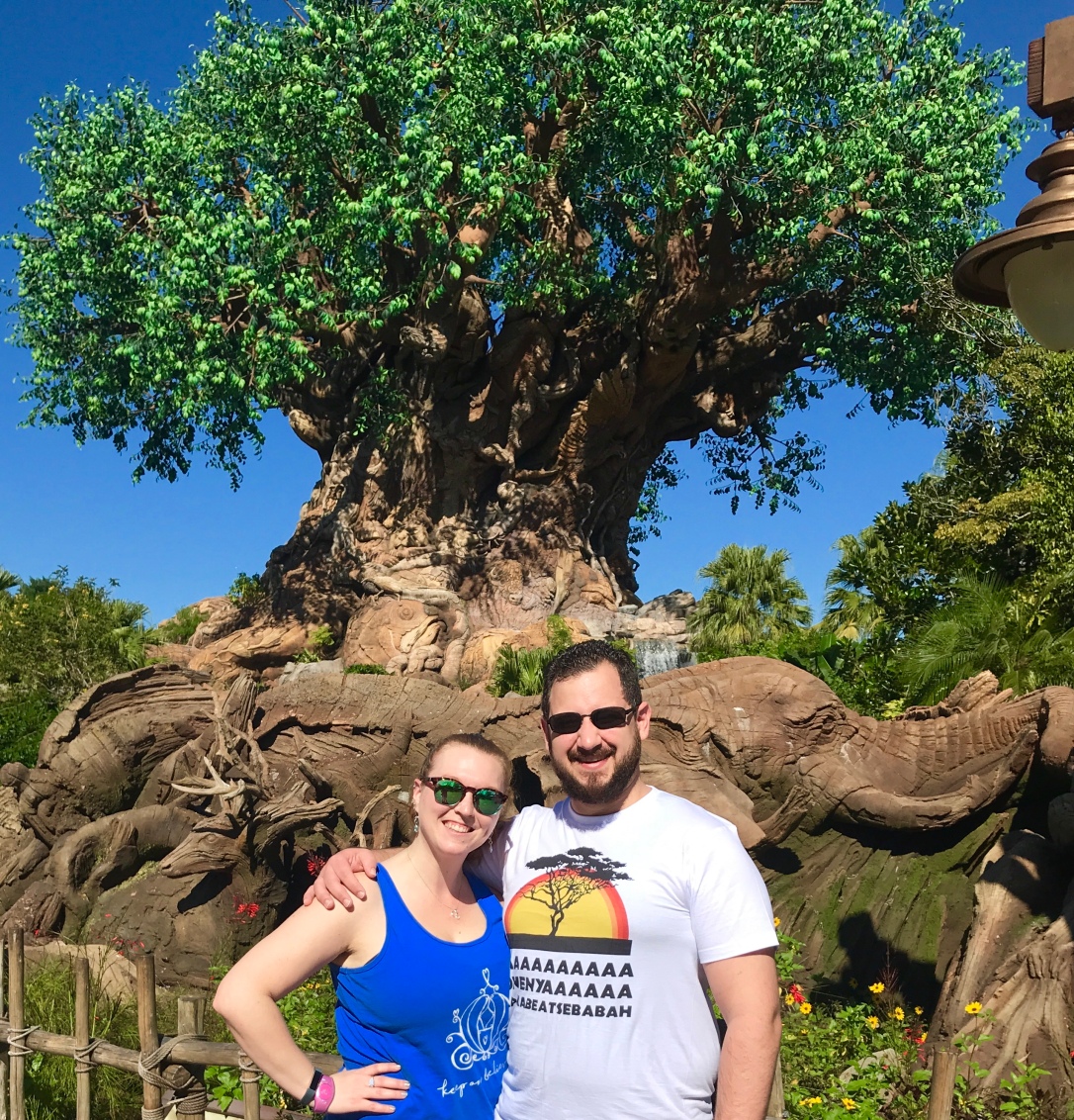 Our earlier FastPass of the day wasn’t until 12:15 but we had bonus FastPasses from our DVC Info Session the day prior, so we decided to head to Dinosaur as soon as we entered the park. Well, after taking some pics of the Tree of Life and Harambe Market, of course. 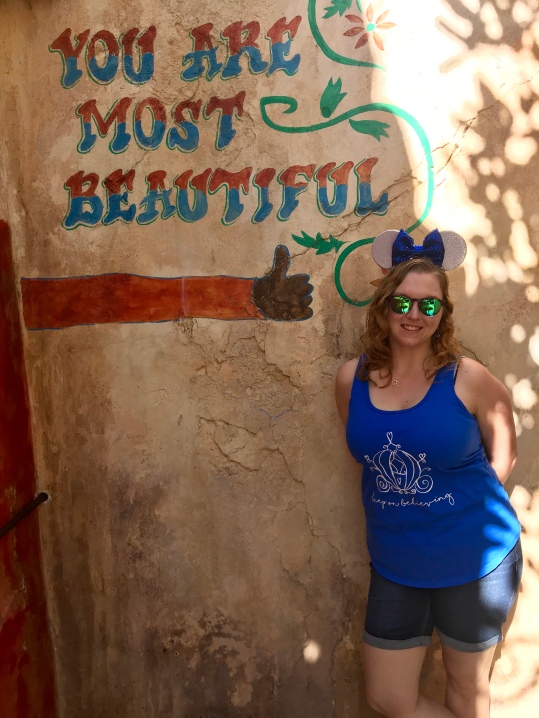 After that, we were hoping to meet up with my family in Pandora for our Na’Vi River Journey FastPass. They apparently didn’t want to wait for us 😛 and they went on the ride without us! We went over, anyway, and took in some of the amazing sights on our way to the FastPass line. Both Flight of Passage and Na’Vi River Journey had standby waits of over 2 hours and the hubby and I had already decided we were not devoting that much time to wait for Flight of Passage. We’ve heard absolutely amazing things but we know we’ll be back again someday and hope we’ll get a FastPass then or that standby won’t be as crazy a year or 2 down the road when we’re back.

Na’ Vi River Journey was an amazing ride. We absolutely loved it! But, it really wasn’t very long. It was definitely worth the 10-15 minutes we waited in the FastPass line but I honestly would have been mad if we’d waited in standby for all that time for such a short ride. So, my recommendation is to definitely try to get a FastPass for it. If you’re going to wait in a standby line, I head the Flight of Passage queue has a lot to see and interact with and helps the wait go by faster, so that’s where you’ll want to spend your time. 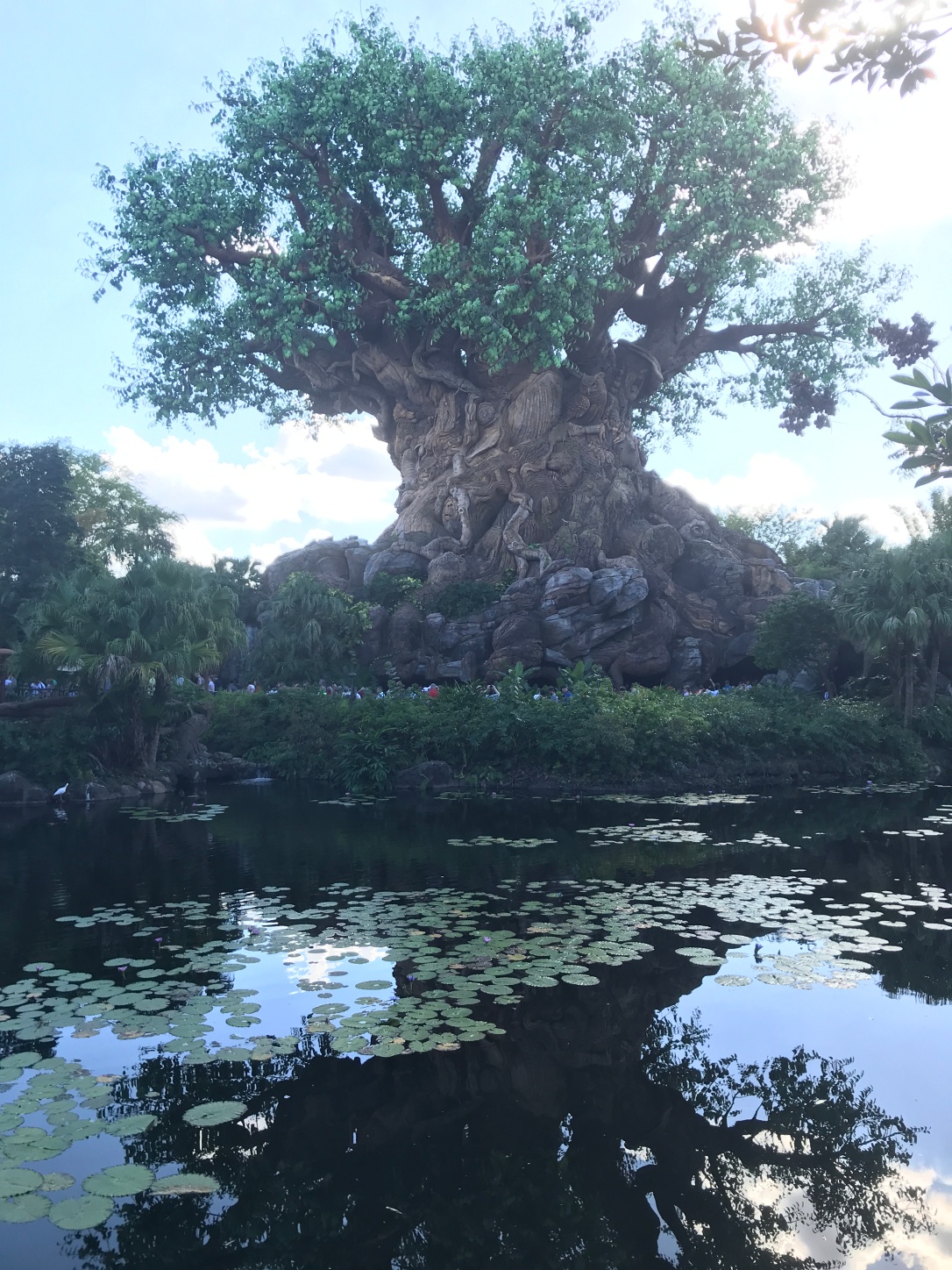 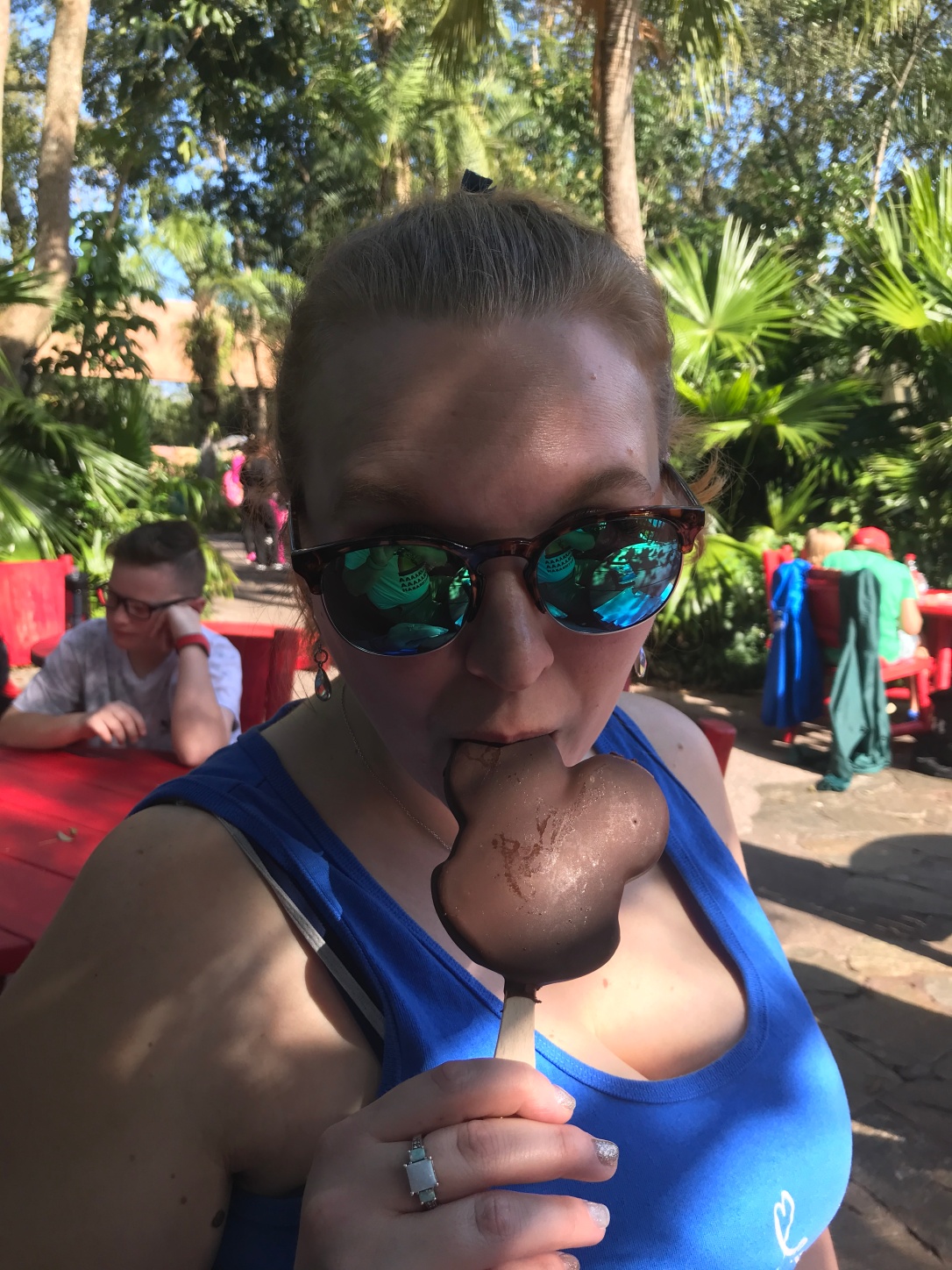 We had a leisurely lunch and chatted about our plans for the rest of the trip, looked at the tree, and decided to get some Mickey Bars while we had a quiet, shady spot to sit. We realized, since we hadn’t used a quick service meal for lunch, that it meant we had an extra one to play with. So while we sat there, I checked the app and found a reservation for breakfast at Be Our Guest for the following morning! It’s so funny that we all spend weeks and months trying (and sometimes failing) to get the reservations we want and I was able to grab one with less than 24 hours to spare, and there were 3 times to choose from when I did it.

By now it really was time to meet up with my family, and we found them having lunch in Harambe Market. Princess Jasmine was very excited to see us and immediately began using Uncle as her own personal jungle gym. We caught up on the day’s events with each other and then it was time for our Kilimanjaro Safaris FastPass. This was the ride I was probably most excited to do with our niece (tho, Soarin’ 2 nights prior turned out to be probably the most amazing thing to watch her experience, but who knew?). She loves animals and we knew she’d get such a thrill out of seeing so many up close. 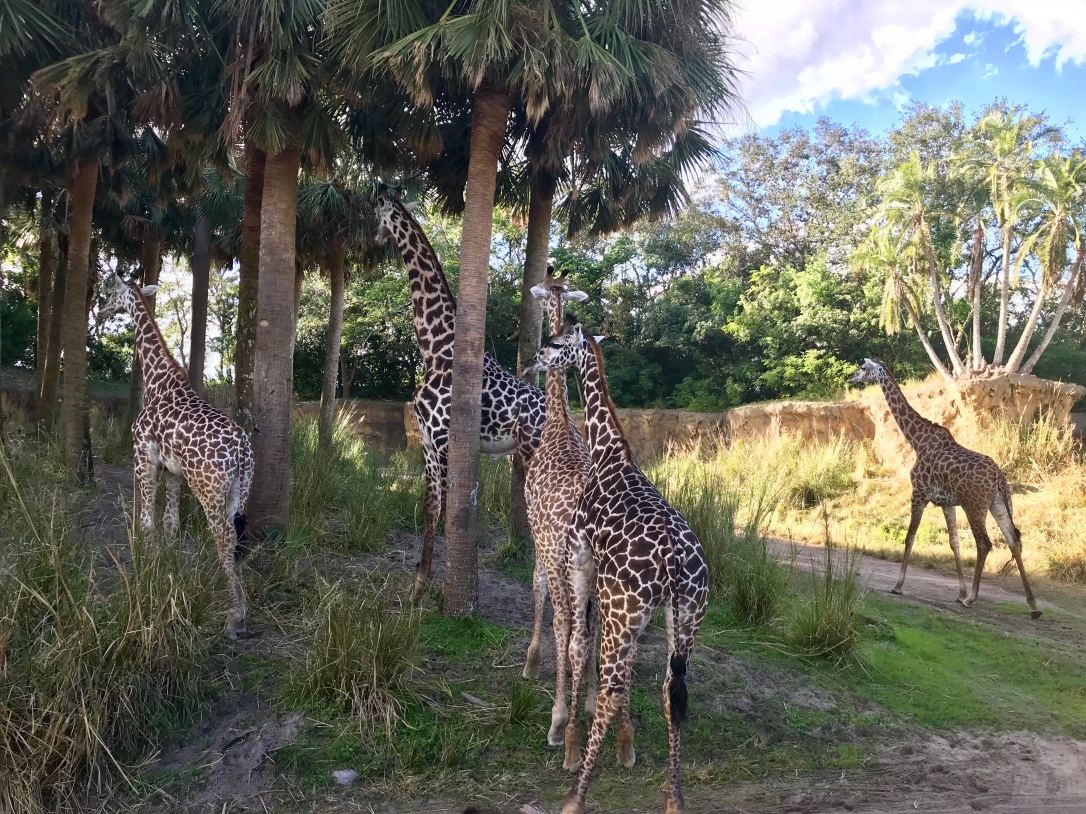 We had probably the best safari experience ever. We always seem to encounter an ostrich in the road who won’t move for the vehicle or something along those lines, but never have we seen 5 giraffes right next to the road, just hanging out like this. We also saw 3 lions, 2 females and a male, and 1 of the females was actually awake and moving around.

After the safari, my dad and husband went on over the Expedition Everest. I think the wait was about 35 minutes, which my dad said was too long but it’s my husband’s favorite ride and one of only 3 on the planet I apparently can’t stomach (it sits alongside Star Tours and the teacups for me). Hubby convinced Daddy and they were on their merry way.

The ladies of the family decided a Starbucks pit stop was in order. The cast members complimented our ears and I got to give out some business cards and we chatted about ears and parks and our trip and it was a fun little experience. They even gave us complimentary cake pops! 🙂

We saw the wait to meet Mickey and Minnie was only half an hour, so we figured it would be the perfect use of our time while we waited for the guys. Well, Disney was VERY wrong about the wait. We waited for 55 minutes before we got into the room with our favorite couple, and there were still 2 parties in front of us at that point. It was a really fantastic meet and greet and Mickey and Minnie were so amazing, but I think we all were a liiiiittttle cranky by that point.

Still, this makes it all worth it. ❤

We met back up with my dad and husband and heard all about how my husband was lucky enough to be present for my dad’s last ride on Expedition Everest. Apparently he can’t handle it like he used to, either, so I promised to try taking some Dramamine on our next trip to try to ride with my husband. Poor guy loves the ride so much and has trouble getting a riding buddy.

It was pretty much time for Rivers of Light at that point, so we headed in that direction. You guys. I loved this!!! It was pretty short (about 15 minutes) but it was so great!! Those little flowers start moving around several minutes ahead of the official start to the show so you get something to distract you while you’re waiting and the show itself was just magical. It’s tough to describe but the lights and the music and everything was just amazing!! Definitely definitely definitely take the time to see Rivers of Light next time you’re in Animal Kingdom!

While we were waiting for the show to start, we managed to snag a FastPass for Dinosaur for after. Thankfully, they were herding everyone out of the amphitheater in that direction, anyway, so that’s where we went! My husband and I honestly thought it was a terrible idea to take our niece on it. She was afraid of Pirates and Haunted Mansion so we figured she would be absolutely TERRIFIED of Dinosaur. But, we spent a lot of time talking to her about the dinosaurs and teaching her to roar back at them, and she actually enjoyed it! 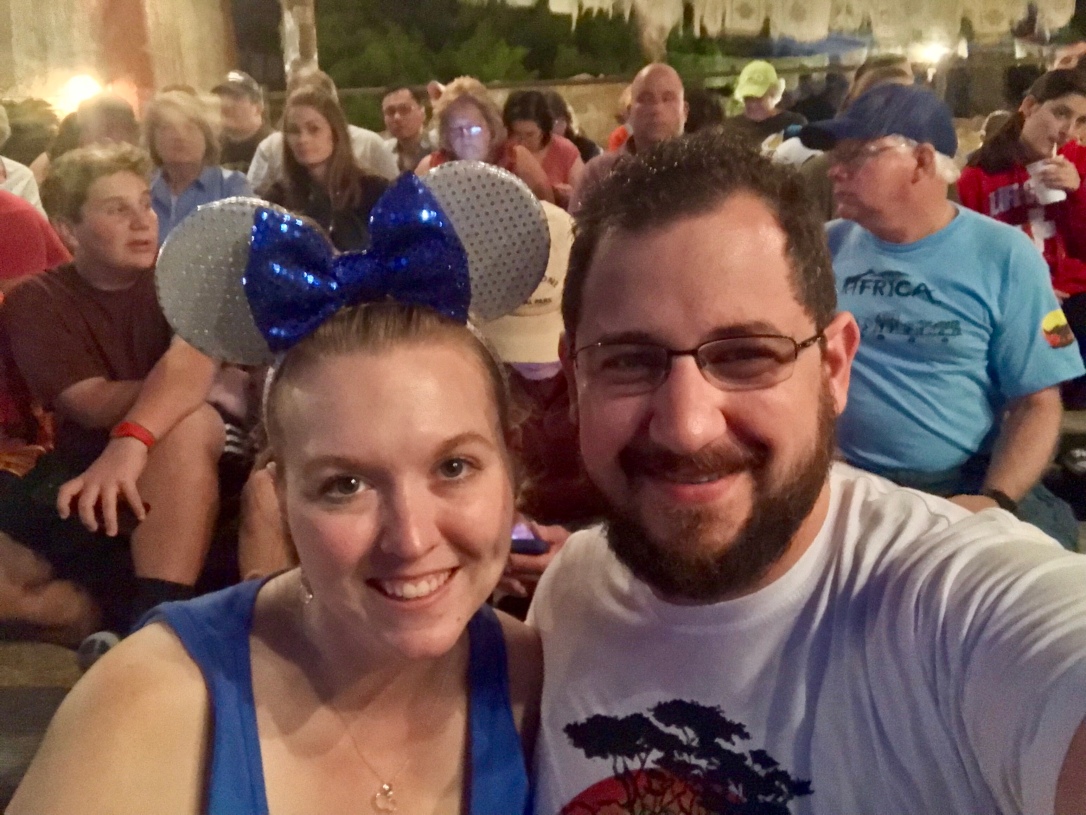 Next up was dinner at Yak & Yeti! No one in my family has been there before and I can tell you we will definitely be going back! Our server, Chris, was absolutely fantastic and the food was amazing. It wasn’t very busy in the restaurant but our reservation was close to park closing time and I loved it. We had a big round table in a corner and we just had a great time. Fun joking with Chris, fun drinks, and yummy food made for the perfect end to the day. 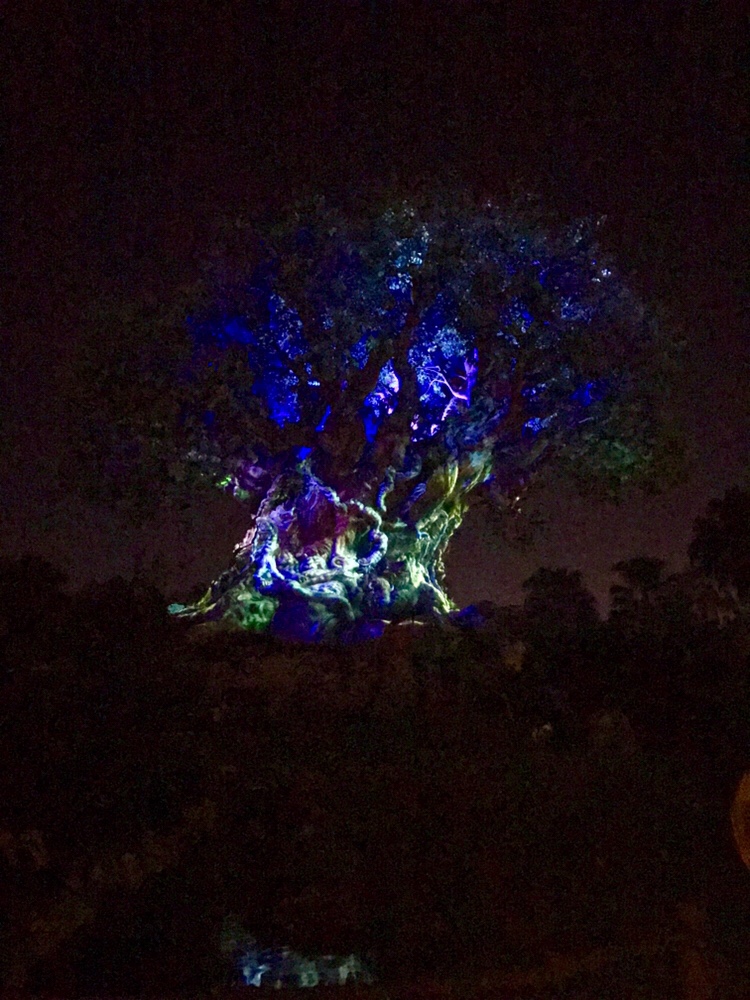 We took our time heading out through a now empty Animal Kingdom, enjoyed views of the Tree of Life all lit up at night, and even stopped to take some pictures of the tree as we left. 🙂