Our 5th and final day brought all 3 of us to Animal Kingdom. Our flight didn’t leave until 8 PM so we definitely had a good amount of time to play with. 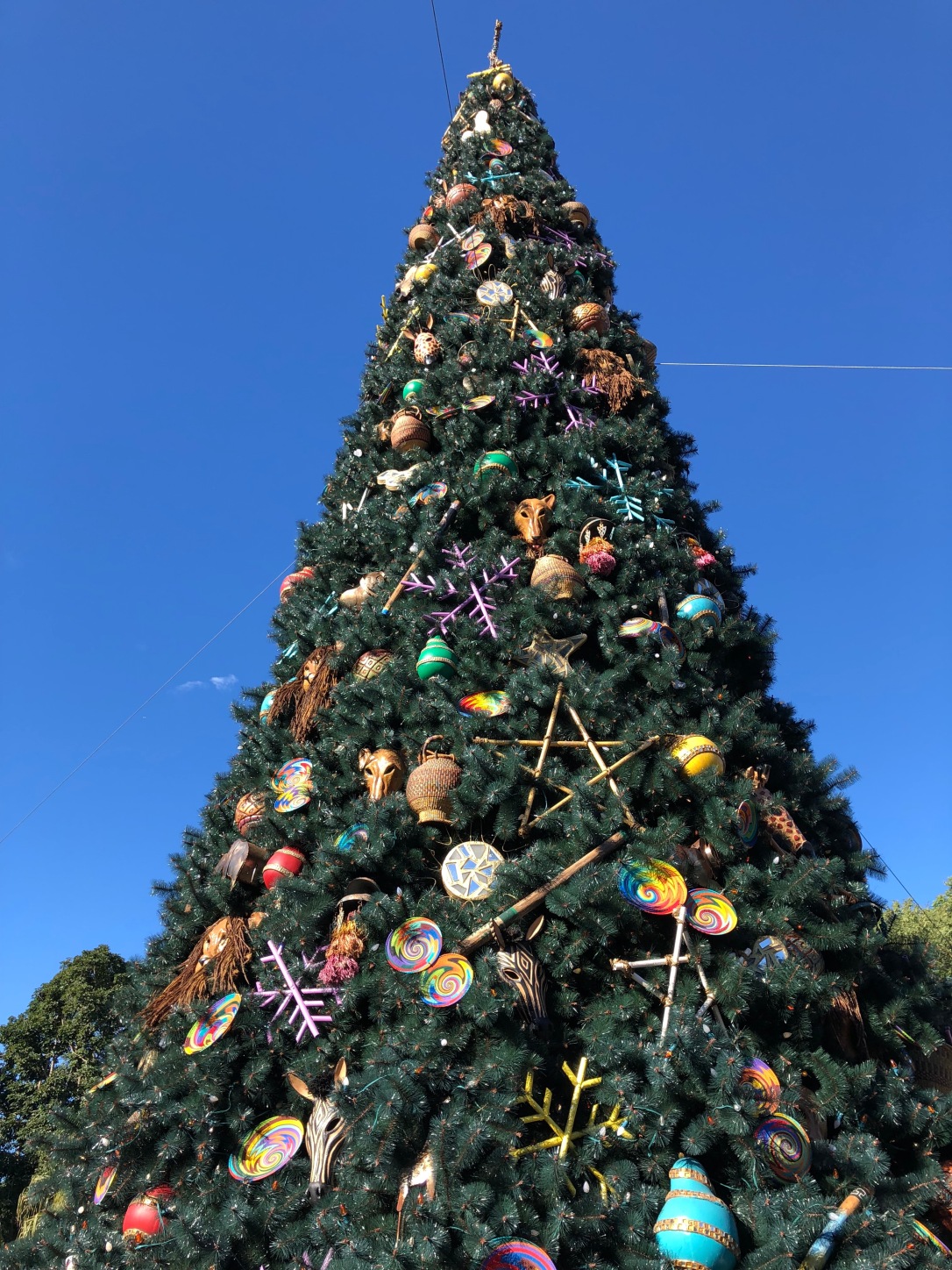 It was another cool morning but it was predicted to get up to 70 and the sun was out – basically the weather was perfect. Anyway, 1st up was photos with the Christmas tree!

Then we got to use the Annual Passholder entrance (which I doubt will ever get old for me). The lines were super long so it was really nice to dart over and head on in. 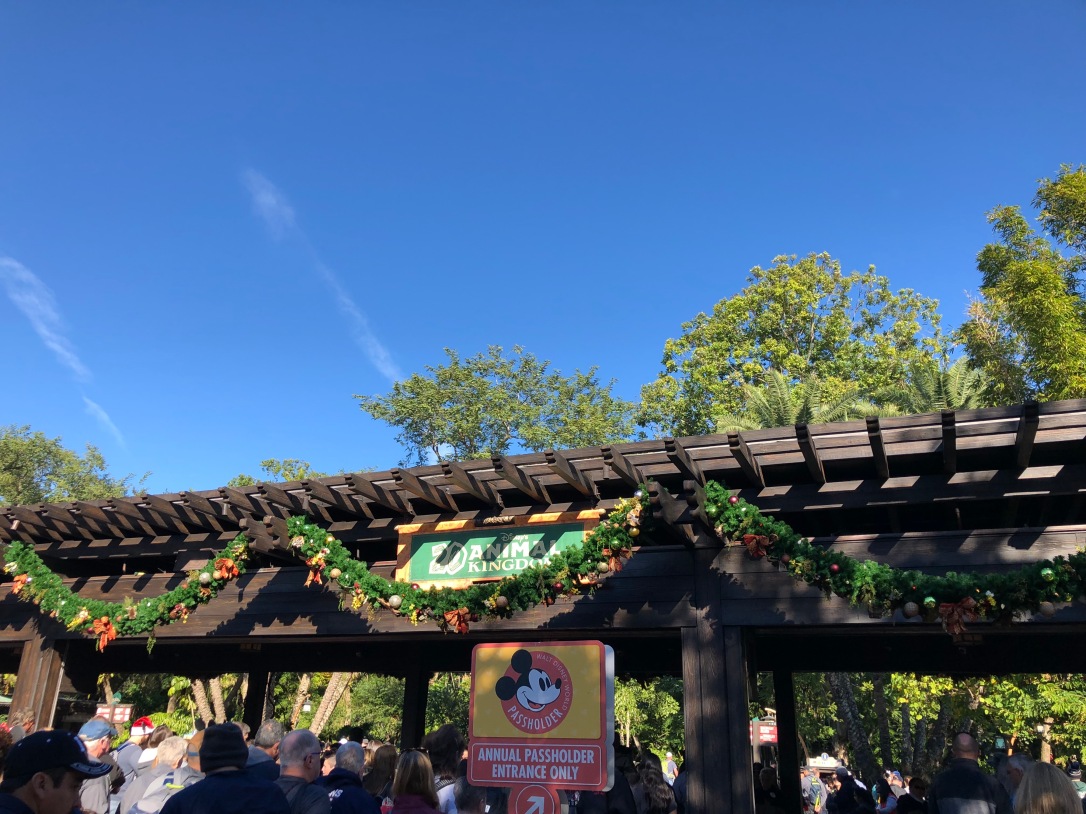 I always say Animal Kingdom is my least favorite park, but oh the views of the Tree of Life when you walk in always have me questioning myself.

Our 1st FastPass of the day was for Expedition Everest, so we headed straight for Asia. 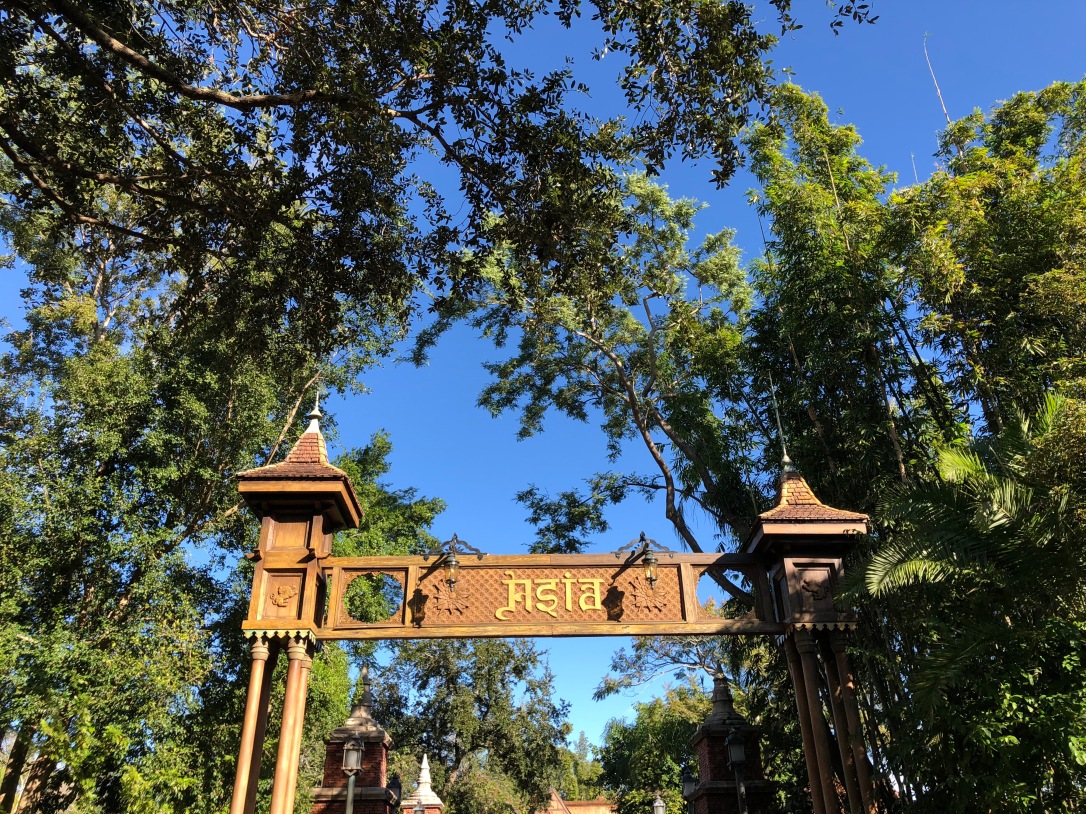 If you read last year’s post about Animal Kingdom (find it here), you already know I’m not an Everest lover. You also may know that I am a roller coaster junkie and have otherwise never met a coaster I didn’t like. There is something about the backwards part of Everest that gets me. But, I love roller coasters and it’s my husband’s absolute favorite ride, so I took Dramamine that morning and was determined to ride with him.

We made a pit stop at a bathroom and spotted some amazing looking breakfast, so we decided we’d have to stop after riding, and it’s actually where we left my mom sitting to wait for us.

We headed for Everest and I was honestly really excited. As I’ve said so many times, I love roller coasters, so I was really hoping the dramamine would do its job and we could ride together. 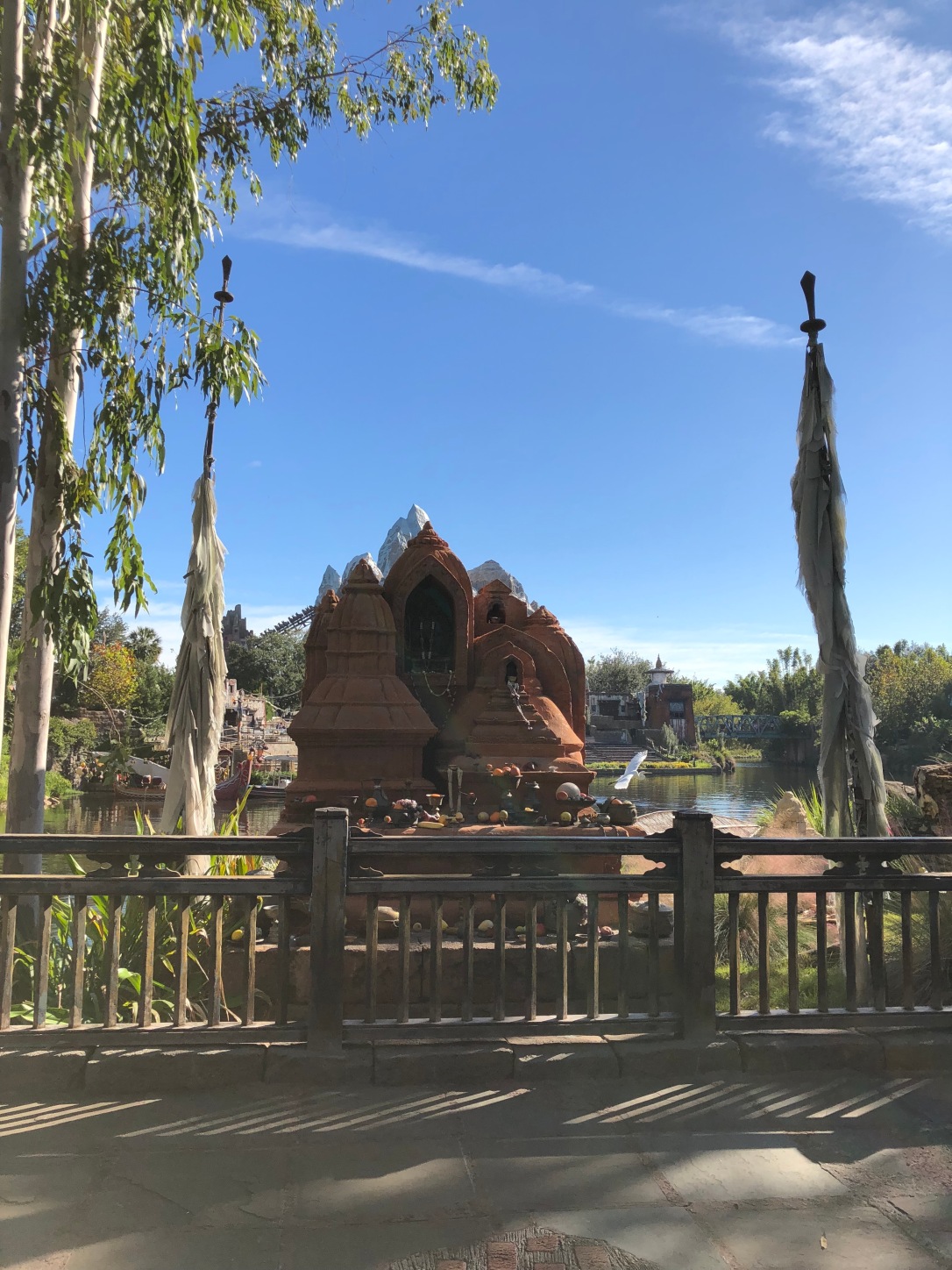 Now I have to deliver the heartbreaking part of the story: the Dramamine did not work. I did figure out exactly what it is about the ride that makes me feel funky, though. There’s a dip during the backwards part, just as you’re about to go around the curve and that’s what did me in. So we walked back to my mom with my hand clamped around my husband’s arm for stability while I apologized to him that I wouldn’t be riding his favorite ride with him in future trips, after all. 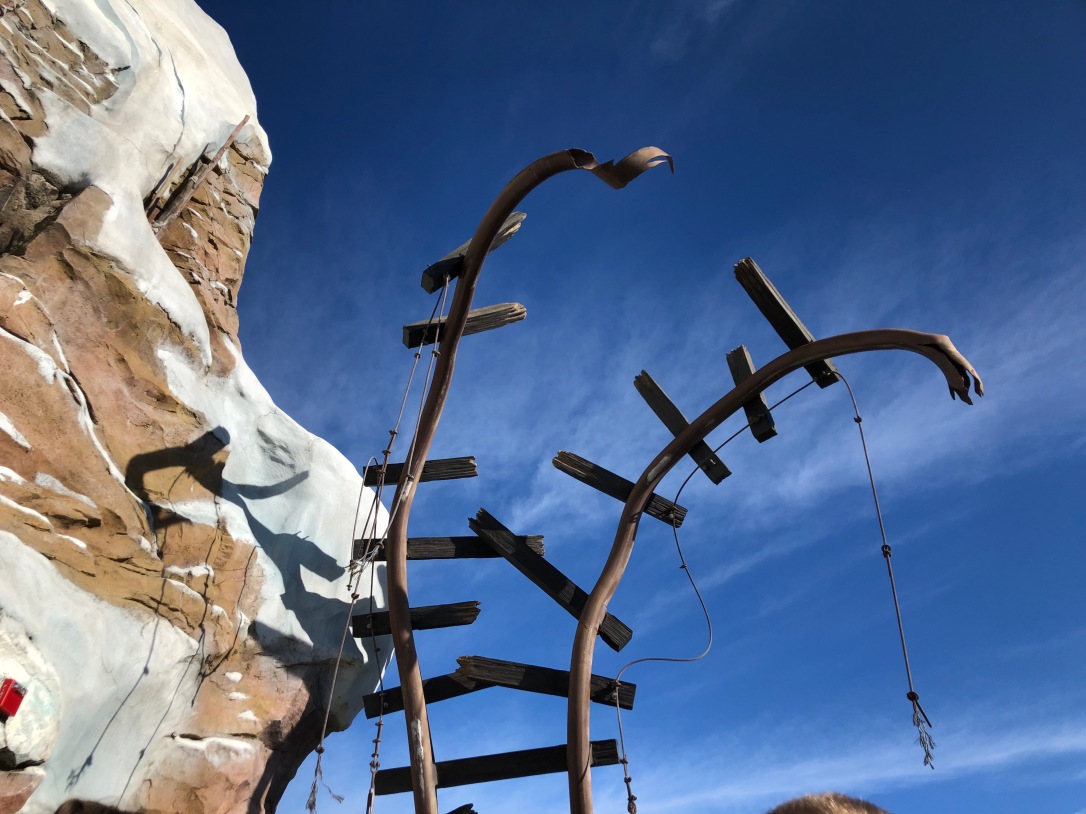 To add insult to injury, apparently you can’t get breakfast after 10:30 AM, so the yummy breakfast we were looking forward to was already turning over to teriyaki bowls and that is just not breakfast for me.

It was about time for more coffee, anyway, so we just went to Creature Comforts for Starbucks and pastries for breakfast. We had specific plans for lunch so we really didn’t need a big breakfast, anyway.

After breakfast, we decided it was time for some shopping. And by we, I mean me and my mom since my husband is so not a shopper. We were, after all, back on Discovery Island, in the center of the park where all the shops are. So really it was the logical thing to do.

Then, we took a stroll through Harambe Market, just because. I love the craziness of it all and there are usually musical performers in the area. 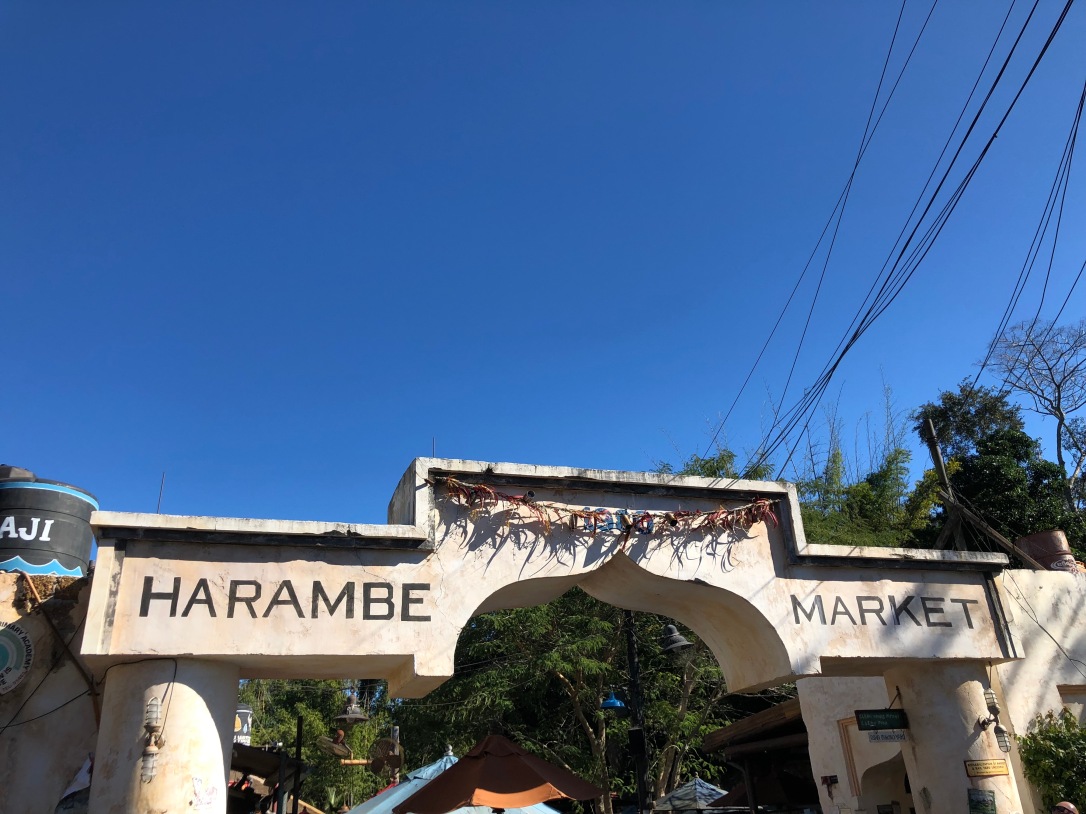 By then it was approaching 1:00, so we figured lunch was in order. Ever since we had it on our last trip, we knew we wanted the baked mac & cheese from Eight Spoon Cafe, so that’s exactly what we did again. My mom had a larger breakfast than we did so she wasn’t getting lunch, so we left my husband in line, took the backpack, and went off in search of somewhere to sit.

We found the coolest little spot! I wish I’d taken a picture of the outside, but it’s just over the bridge from Discovery Island into Asia, to the right. There’s an area with some tables and then this little hut thing with 2 tables in it.

The baked mac & cheese counts as a snack credit if you’re on the dining plan, so they’re pretty small. I just got 1 because I knew I wanted dessert, so after we were done eating I went over to an ice cream cart nearby and got us all Mickey Bars. 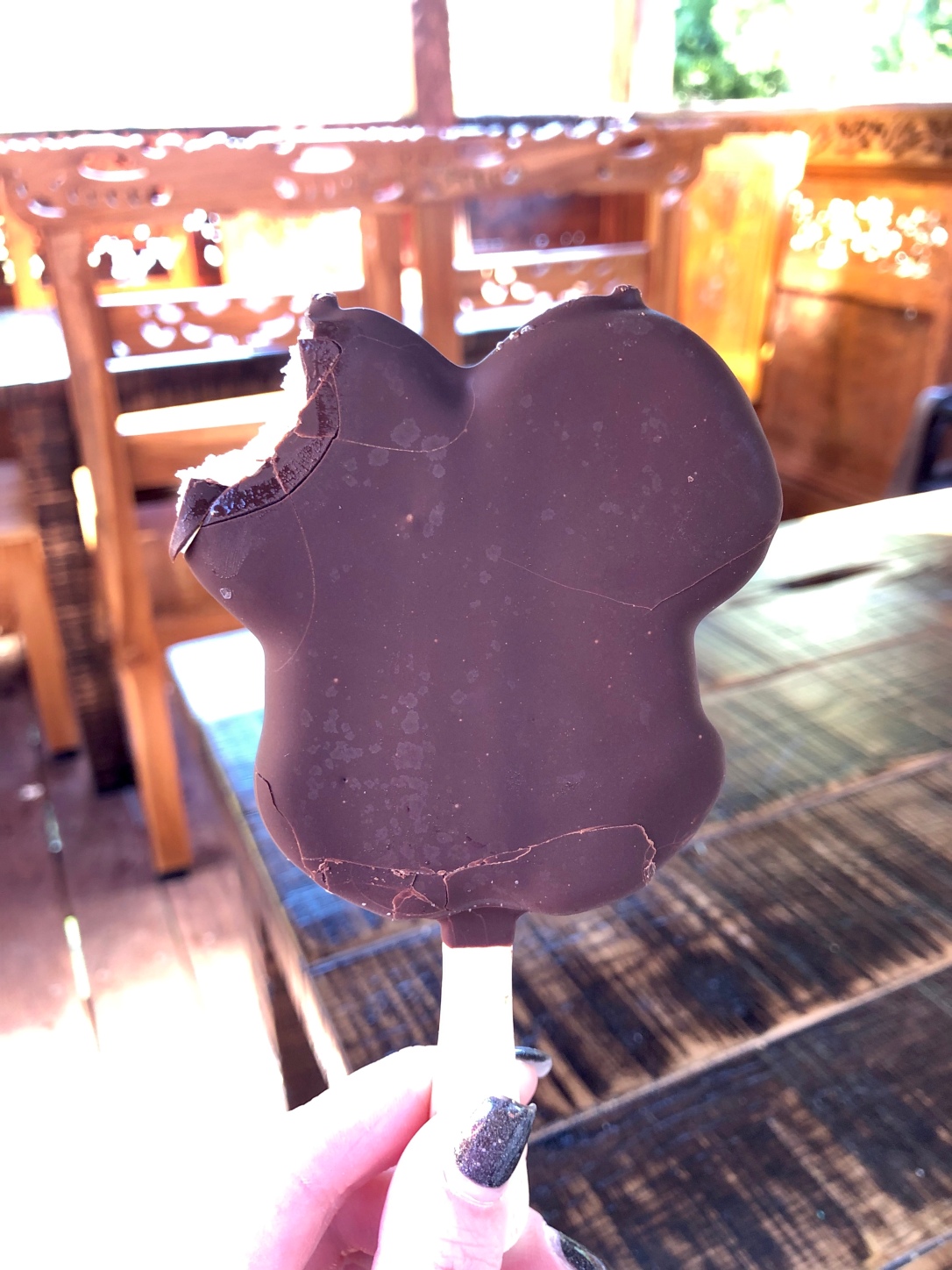 Next up was our Dinosaur FastPass, which meant it was time to head to Dinoland U.S.A.! We all love this ride so much and my husband and I were especially excited to ride it again after having ridden Indiana Jones in Disneyland earlier in the year. It was awesome, as always. We totally said we were going to make silly, terrified faces for the picture and then I completely forgot, so there’s that. My mom and I look confused/bored and hubby is way into it. 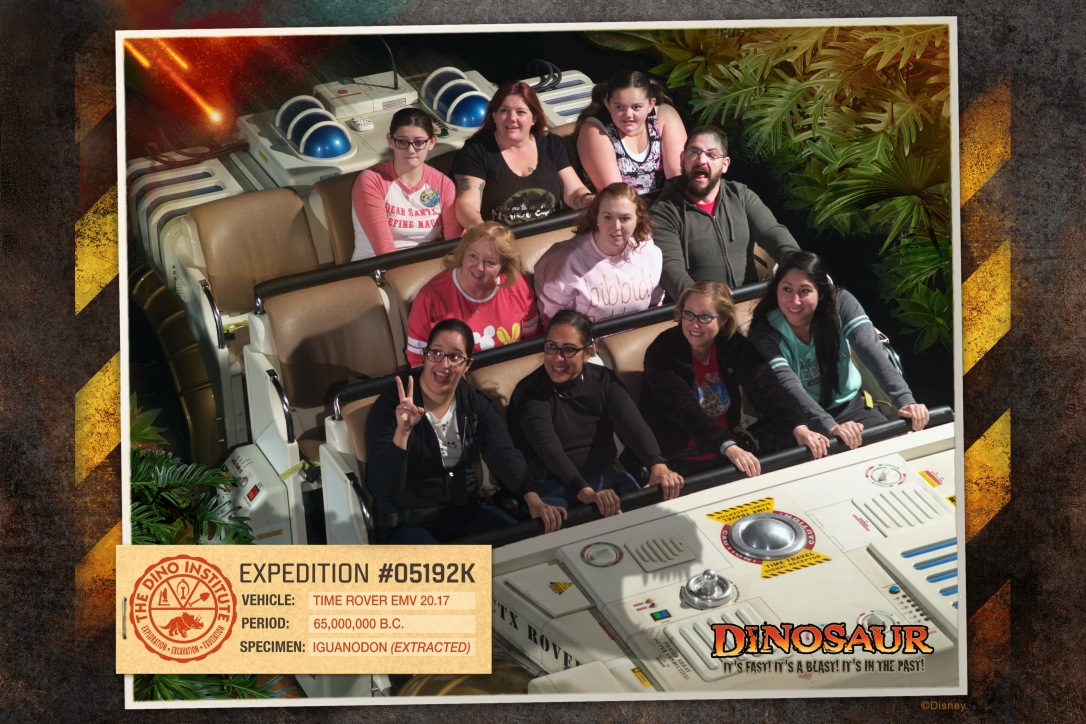 After Dinosaur was what I was probably more excited about than anything else on this whole trip. And, like, way more excited than any 30+ year old person should be but I don’t care. 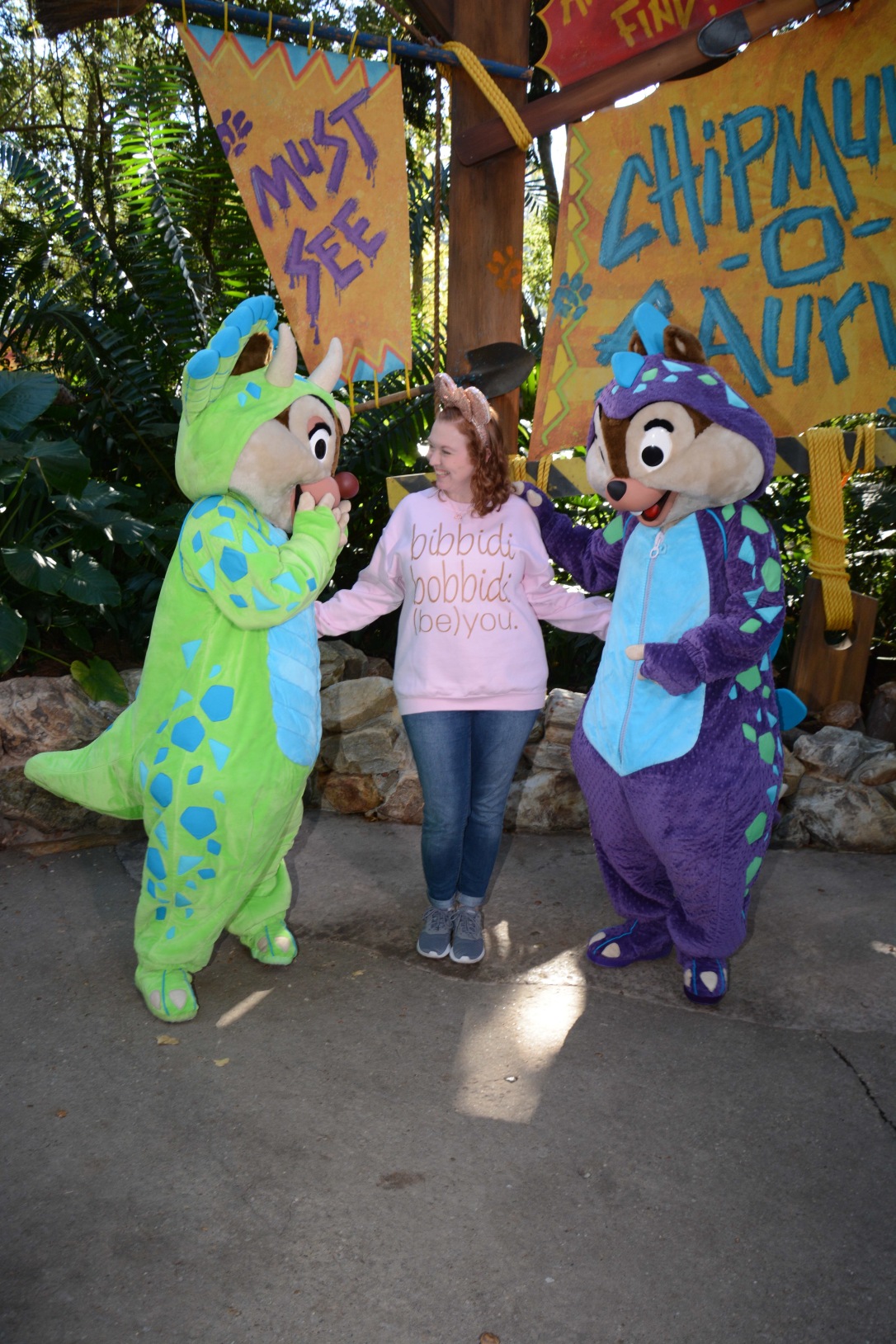 I GOT TO MEET CHIP AND DALE IN THEIR DINO COSTUMES!!!

We had some time to kill before our Safari FastPass, so we decided to head on over to Pandora. On our last trip, my husband and I had a Na’vi River Journey FastPass but realized afterward we hadn’t really spent much time looking around and really just did the ride, stared at the floating mountains, and went on our merry way.

It’s just so cool and so pretty here. I don’t think it matters if you’ve seen Avatar or if you’re a fan, it’s an amazingly detailed area.

Then we headed to the Kilimanjaro Safaris for our final FastPass of the day (and trip) and our final attraction of the trip. The FastPass line was outrageously long and I was a little anxious about making it to the airport and everything, but the wait, as always, was well worth it. 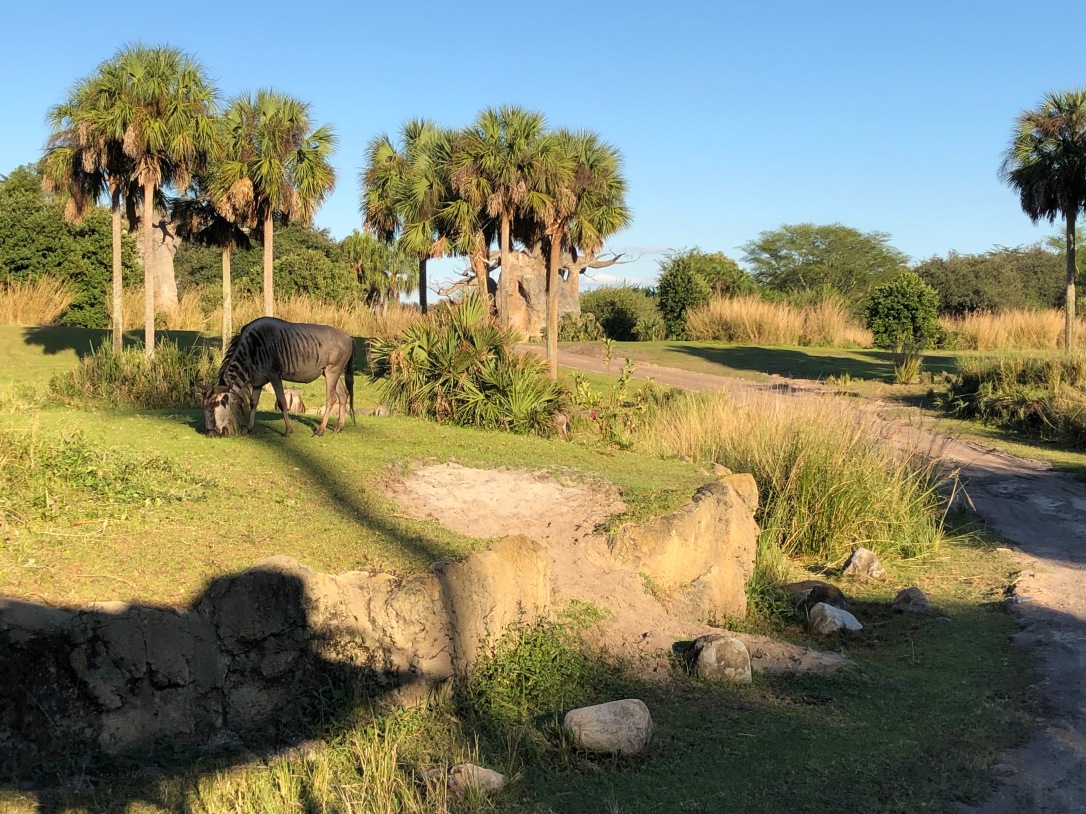 We even had a minor traffic jam because a rhino was strolling in the road! 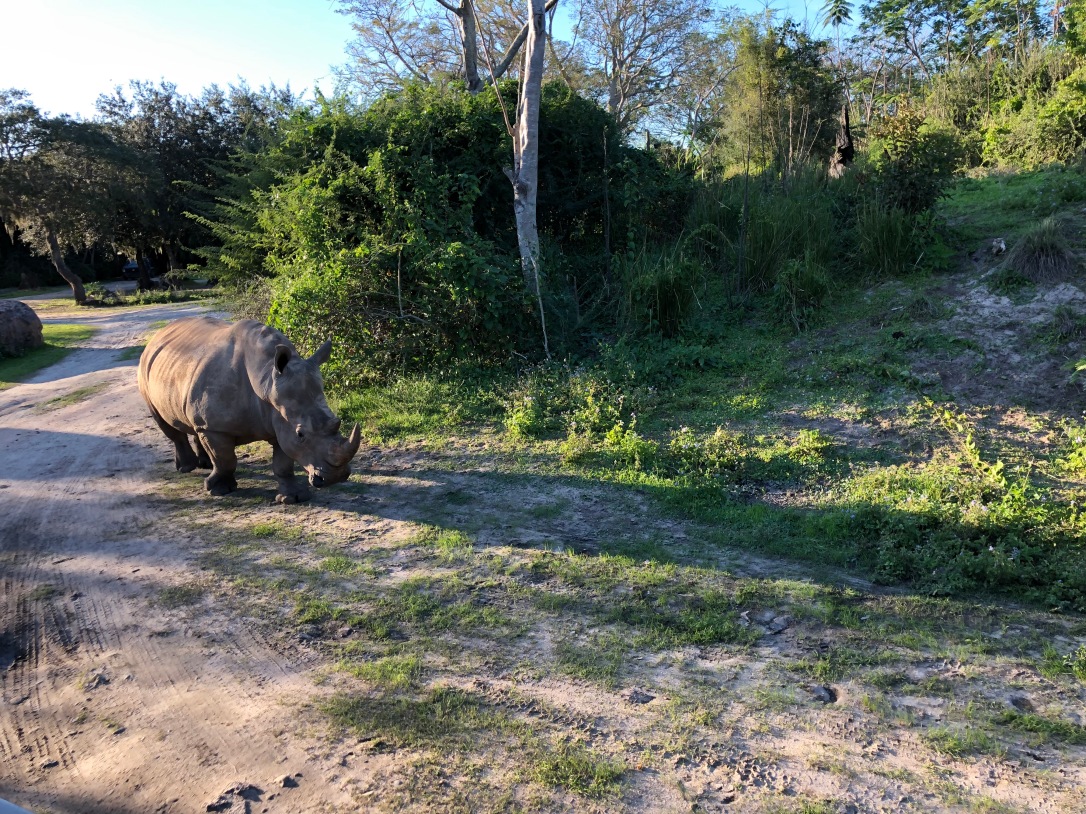 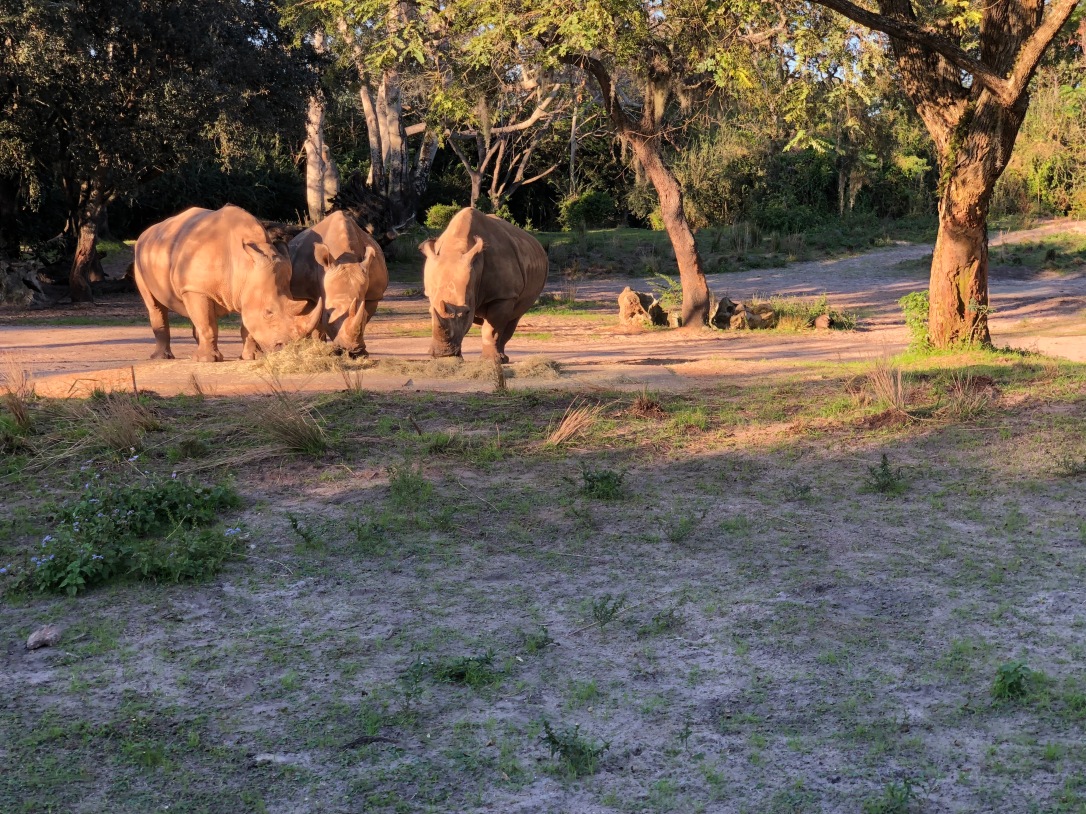 And that was that. Animal Kingdom was pretty mellow, especially compared to the previous 4 days. I will say it was tough planning the trip with such short notice and staying off property since the whole scheduling of FastPasses was a challenge, but we really had no complaints about how any of the trip went. There were definitely rides we would have liked to have gotten to ride but couldn’t because the wait times were too long without a FastPass, but we got to ride so many things we love and don’t regret a thing. 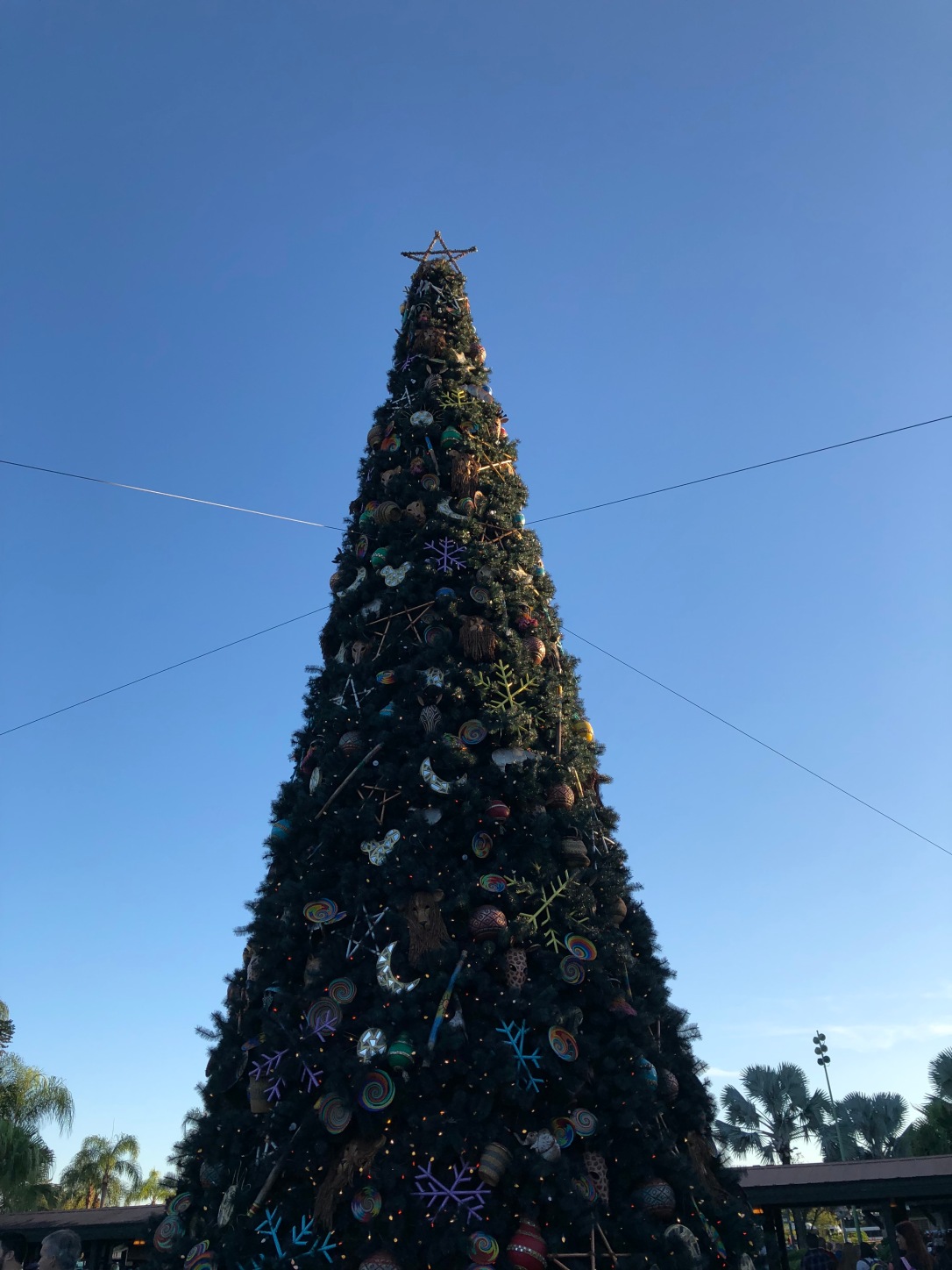 So we said goodbye to the tree and made our way to the airport. All my worrying about the Safari wait was for naught because our flight got delayed. We took a positive spin on that and made the time to have a sit-down dinner, complete with wine and an appetizer, and it was a good way to round out the trip.

Thanks for reading along! We had such an amazing time on this trip and can’t wait for more adventures.