Hi everyone! Alex here again to tell you about the day I spent at Disneyland Paris. Mom and I woke up nice and early, so we could get ALL THE THINGS done hopefully in one day. We left our room at Disney’s Hotel New York and headed for Disneyland. One cool thing about Disneyland Paris is that to enter the park you must walk under part of the Disneyland Parc Hotel. It costs a fair share to stay at that hotel but, if you can afford it, there are hotel rooms that overlook Main Street USA and you can see the castle from your window in your room. 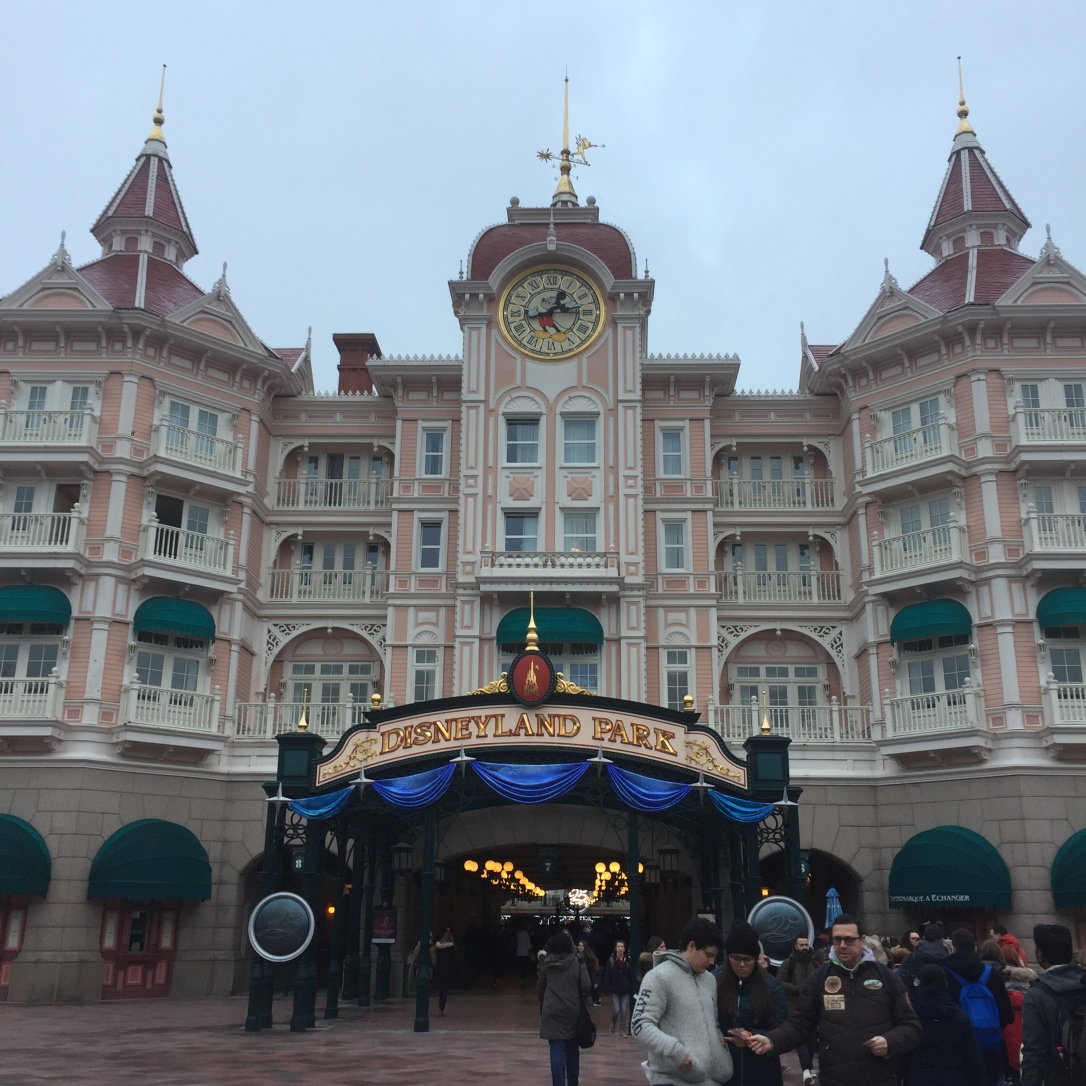 We got into the park and wanted to grab something small for breakfast. We found a nice little café that I could grab the croissant that I had been craving ever since I landed in Paris. The Parisian bakeries will NEVER disappoint. 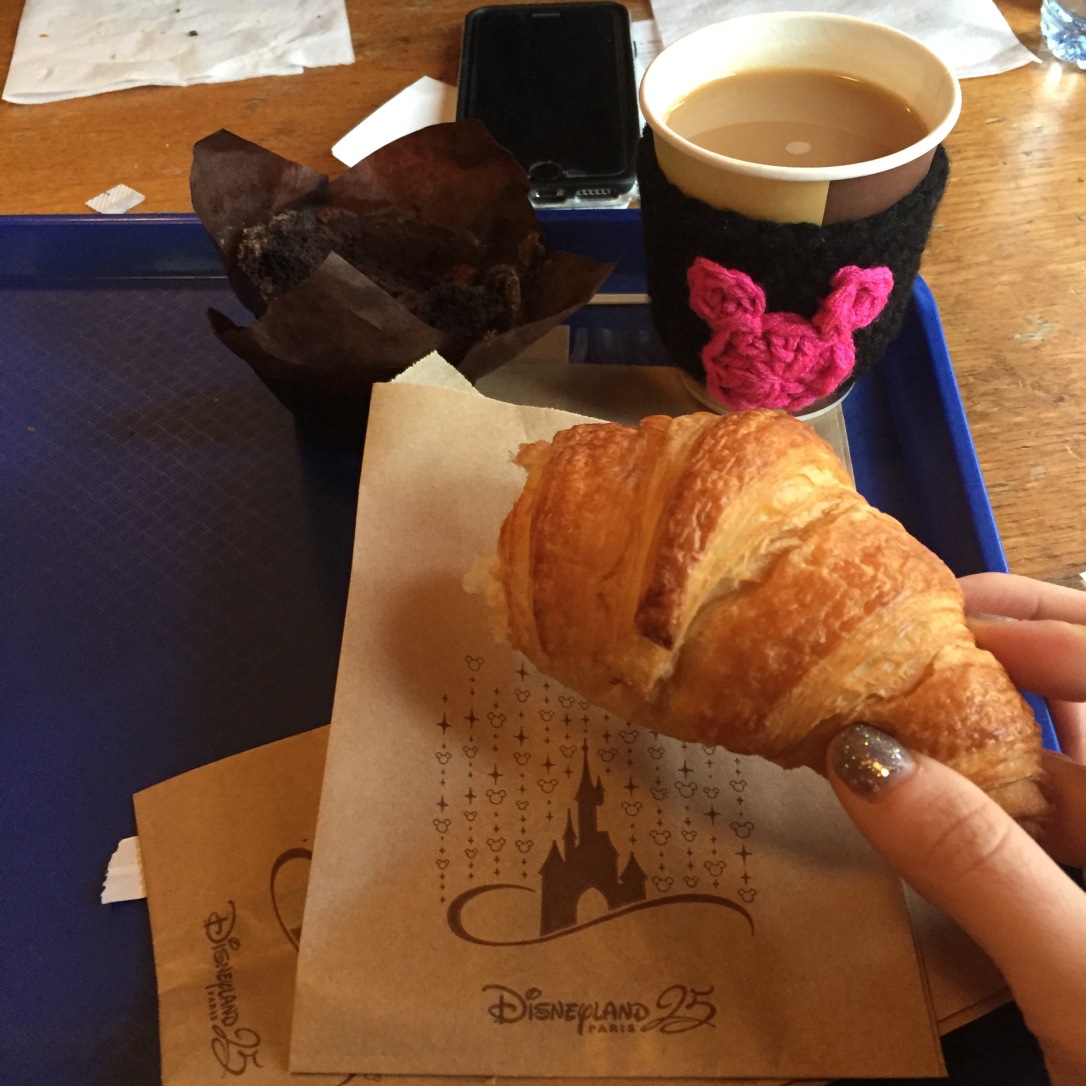 Now, like I said previously, Disneyland Paris is celebrating their 25th anniversary so all the characters had their anniversary attire on. I’m not normally one to stand around and wait to see characters in the park (unless the line is SUPER short), but my father is a Donald Duck fan and I couldn’t pass up the chance to grab a photo with his favorite character. 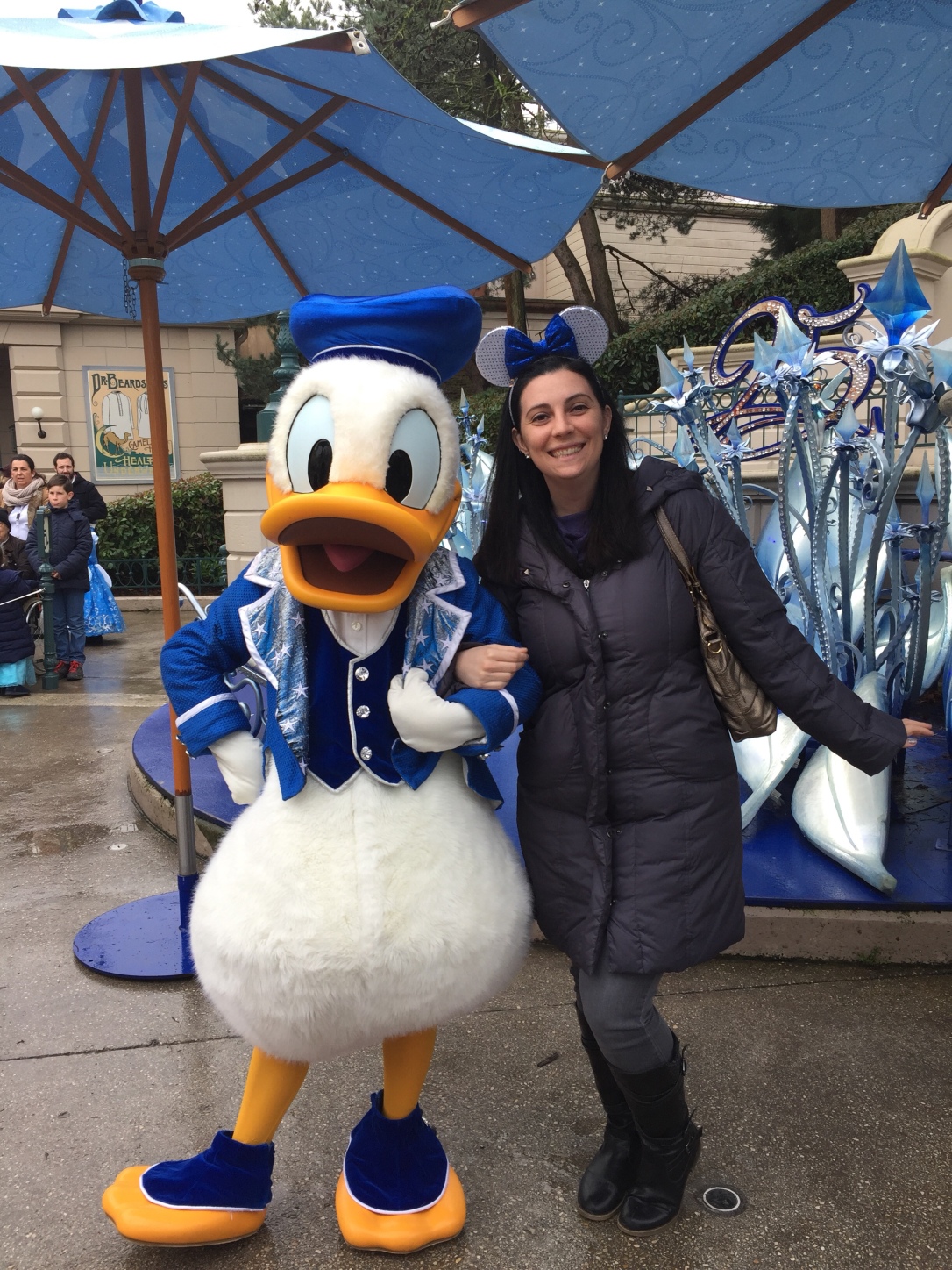 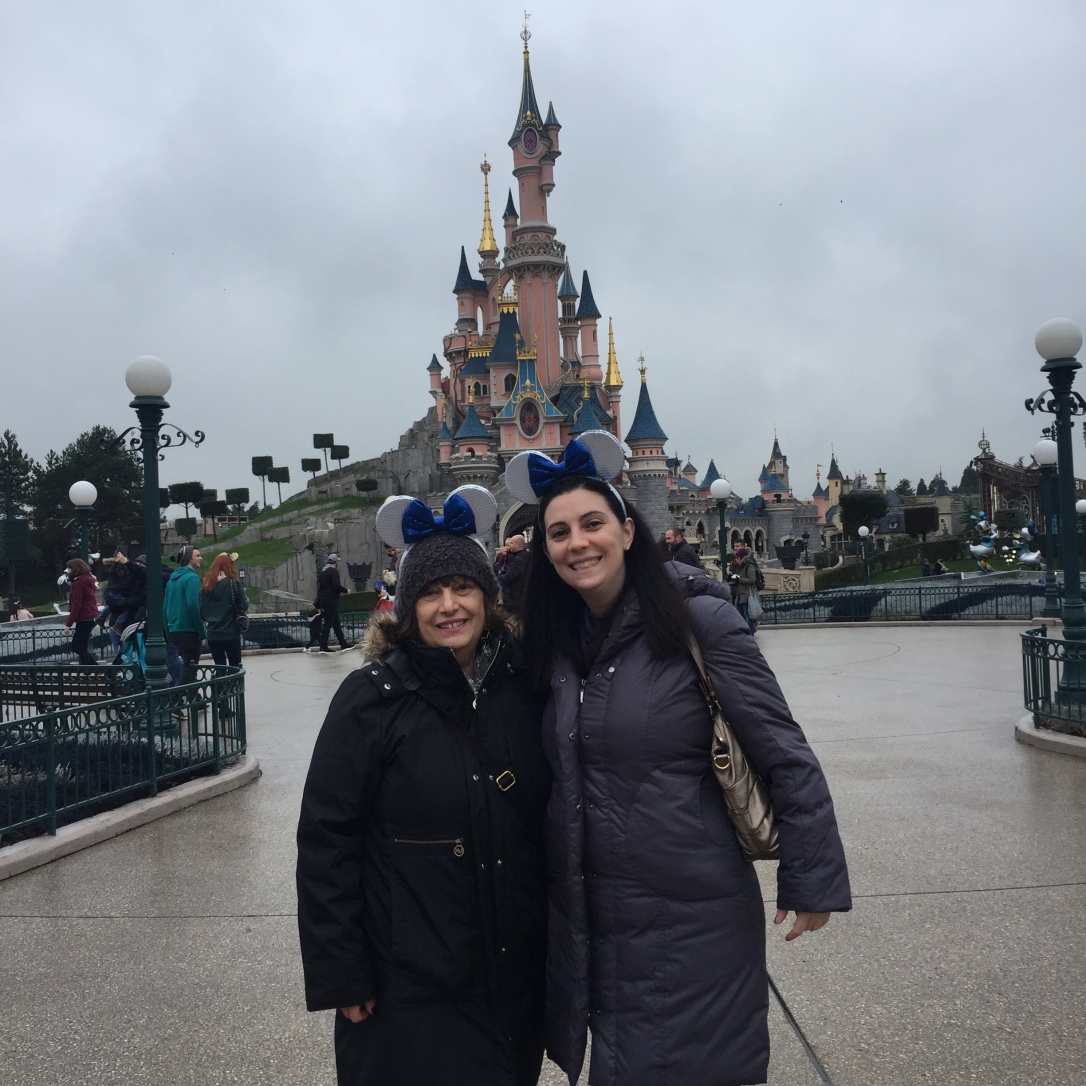 After waiting around in the cold Parisian queue to see Donald, we headed for Adventureland and one of my all-time favorites, Pirates of the Caribbean. Much like Disneyland in Anaheim, it too features a restaurant that the boats bring you by in the beginning of the ride. My favorite part was seeing Captain Jack at the end and fun fact: Johnny Depp did the voiceover work for it as he is fluent in French!

We headed on over to Big Thunder Mountain next as the misty clouds were starting to go away. Could be my imagination but I felt like it was faster than the one in Florida that I am so used to. Now, luckily this park does not have a version of Splash Mountain because I would have had to try it and most certainly would not have wanted to be wet on the cold temps we had (it was about 40°F that day). 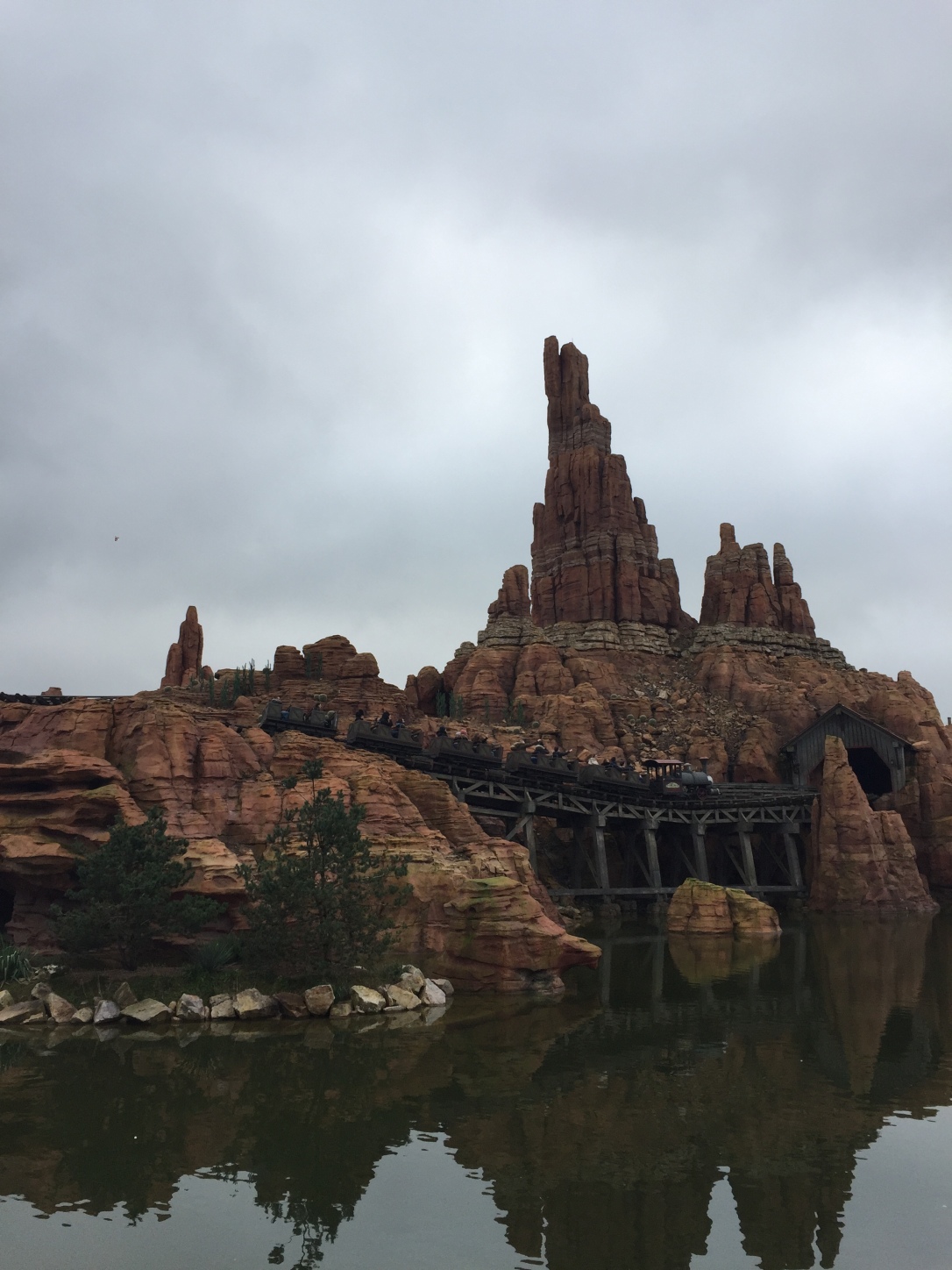 Keeping with the rollercoaster theme, we headed to Indiana Jones et Le Temple Du Peril aka Indiana Jones and The Temple of Doom. Neither of us had any clue what to expect on this ride. Turns out it’s a rollercoaster that has inversions. OOPS! Mom might have wanted to sit that one out so following that heart dropping adventure we decided to stop for a quick bite to eat for lunch. 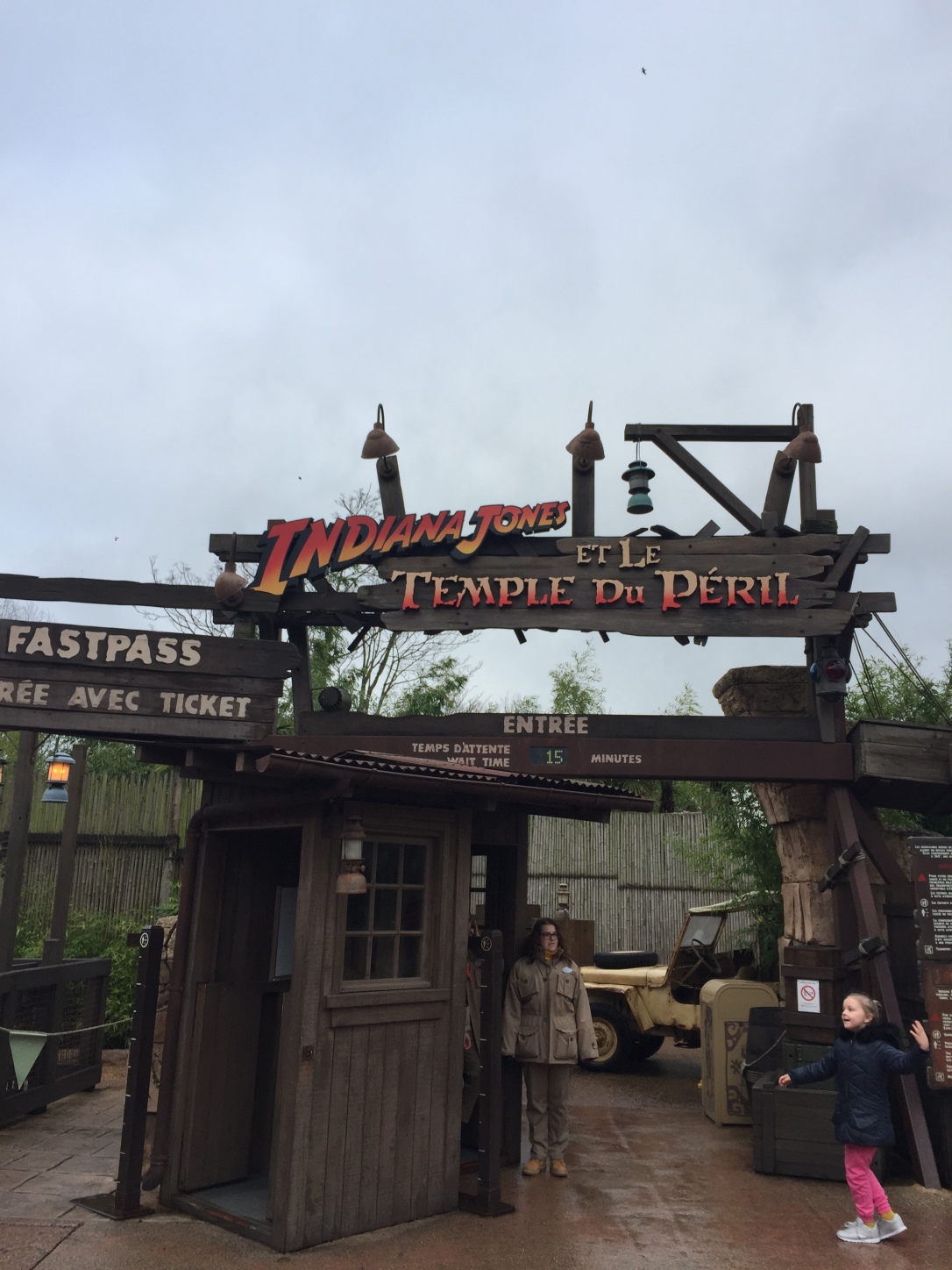 We happened to be close to Toad Hall restaurant so that’s where we found ourselves. I was so hungry I didn’t take any food photos (sorry guys) but how cute is mom in her shirt? I love Disney villains, so I knew I had to get that one for mom.

After lunch the sun was finally starting to come out and warm things up a bit, so we strolled over to Alice’s Curious Labyrinth. I can’t say enough how amazing this was. It is a maze that you walk through to eventually get up to a replica of the Queen of Hearts castle where you will find your favorite characters along the way. And yes we actually got lost for a brief moment in time.

In Fantasyland we hit up all the usual suspects along the way such as It’s a small world, Blanche Neige et le sept nains (Snow White and the Seven Dwarfs), and Peter Pan’s flight. 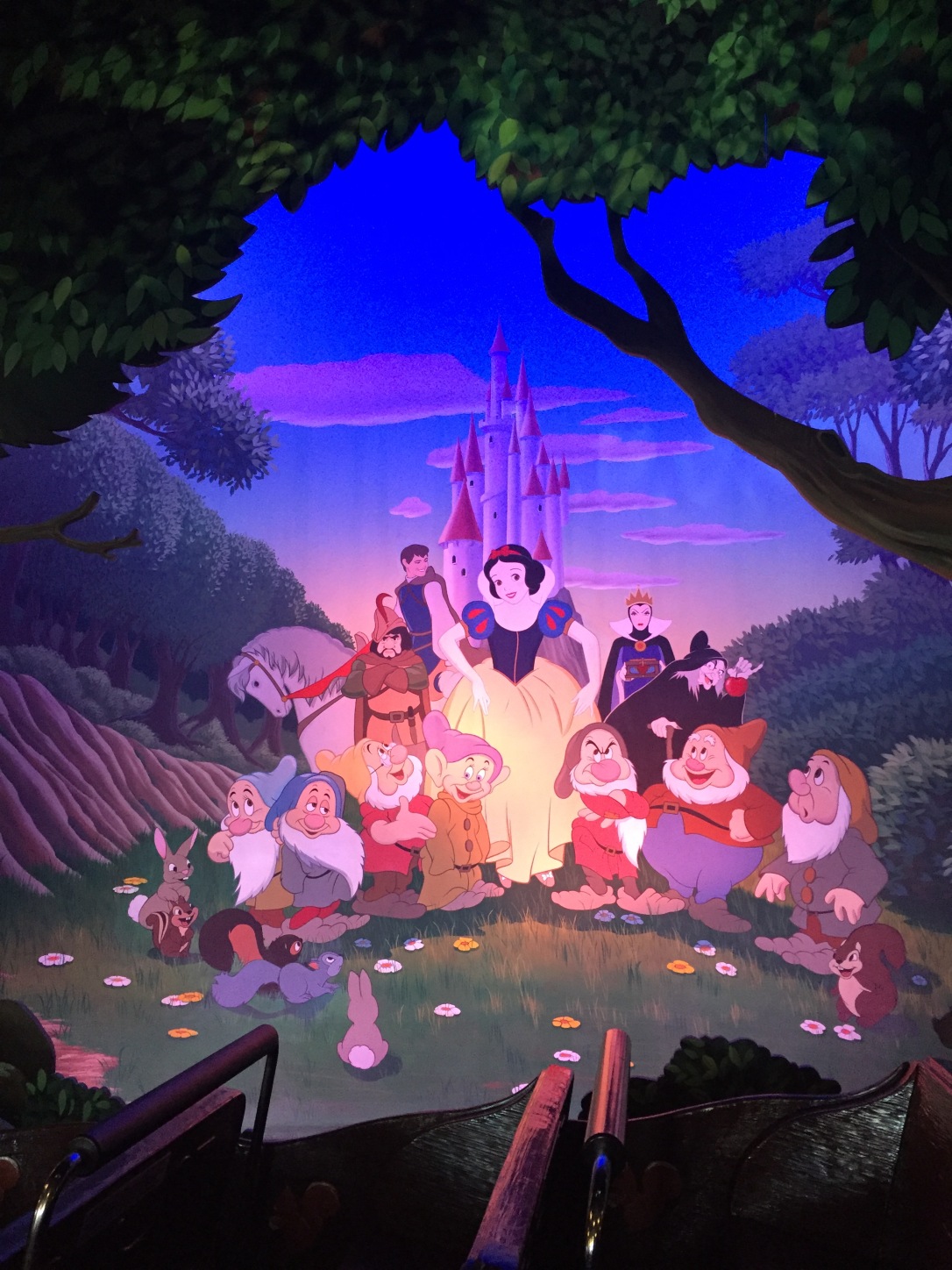 We had perfect timing as just walking out of Fantasyland we found a spot right near the castle to watch the 25th anniversary parade.

I’m not normally a big parade person but seeing Maleficent in front of Aurora’s castle was something to behold.

After the parade we walked on over to the part of the park that I was most anticipating, Discoveryland. This is much like Tomorrowland for those who have been to the US parks. I had been talking mom’s ear off about this version of Space Mountain for months. In part because this is the only version of Space Mountain that has inversions and in part because it was Star Wars Season of the Force it got transformed into Hyperspace Mountain. I can’t say enough good things about this ride. If you are a thrill seeker such as myself this ride will not disappoint. I loved it so much I rode it twice. The only ride out of both parks that I had to do more than once. 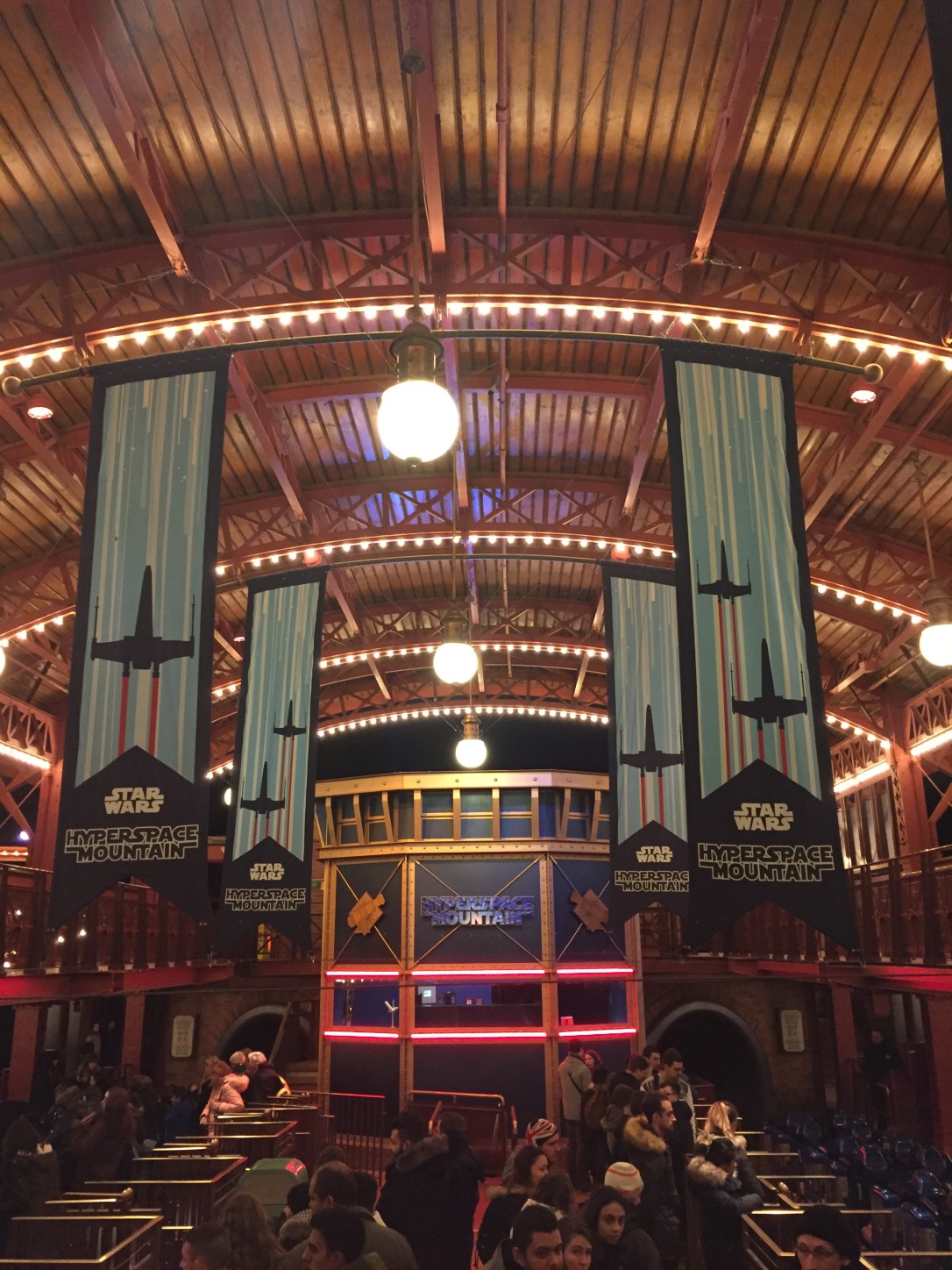 From there we went to Star Tours, which was fun because it included scenes from the newest Star Wars film, The Last Jedi. And, as always, when around one has to ride the Buzz lightyear laser blast (I tried to be a gracious loser). Again, in the desire to get everything done in the two days  we had, we opted not to do a sit down dinner but to grab a small salad from the Café Hyperion in Discoveryland.

That just about brought us to the time when their nighttime show was about to start. We walked out to find a good spot and say good night and see you again real soon to Disneyland Paris.

I loved Disneyland Paris and, if anyone has any questions for me, I would love to answer them for you. It was so much fun blogging for a few weeks. Hope to talk to you all again soon (and by soon I mean when Stacy and I head to WDW in November for the Wine & Dine Half Marathon Weekend)!