As you read about in the Disneyland Birthday Trip post, my husband and I planned a trip to Disneyland and San Diego for my birthday! This post, and the next several weeks’ worth of posts, will chronicle our trip to the original Disney park and our time spent in Cali.

Our trip started with a 6:35 AM ET flight, which meant getting up around 3:00 AM. We were pretty exhausted, but I always think it’s worth it to do that so we can get as much as possible out of the day once we arrive. We had a 2.5 hour layover in Dallas, which gave us enough time to actually sit down and have lunch, which was nice.

We landed at John Wayne airport around 1:35 PM PT (which felt like 4:35 PM to us), found our way to our luggage, and grabbed a Lyft pretty quickly. The Orange County airport is only about a half hour from Anaheim/Disneyland, which is nice.

Driving into the Disneyland area was pretty amazing and totally crazy. We could see The Matterhorn and Mission: Breakout from the highway! I was kinda freaking out and I think our Lyft driver Robin was maybe a little taken aback by my enthusiasm. But I’m unapologetically me and she was sweet. 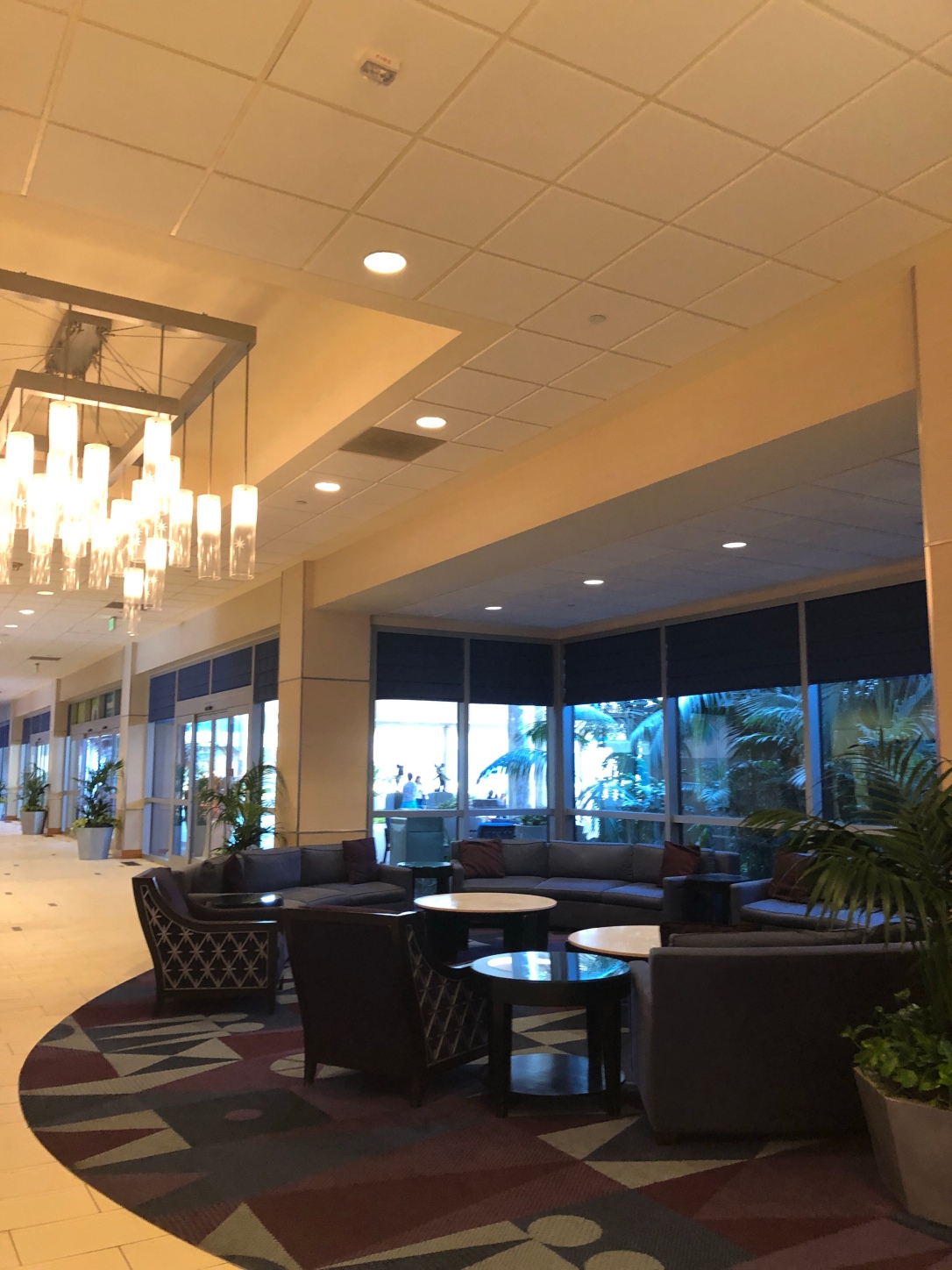 We didn’t have to wait long to check in and there wasn’t a line behind us, so we decided to ask about adding a day to our park tickets right there. We’d bought a 2-day Park Hopper with MaxPass last year, but since all our plans changed, this trip was going to be 3 days in the parks. Thankfully, they were able to let us buy that upgrade right there, so everything was all taken care of before we even got to the parks!

If you don’t know, MaxPass is something exclusive to Disneyland, but it mostly gives you things you already get in Disney World. Disneyland’s FastPass system still utilizes paper FastPasses where you need to physically go and get them. MaxPass costs $10/person/day and you get to make your FastPasses and redeem them from your phone and you get all your PhotoPass photos, too. I think it’s worth that cost just for the pictures alone, but I’ll talk more about the FastPass part in my next few posts.

Oh, and the headboard LIGHTS UP and plays music!! 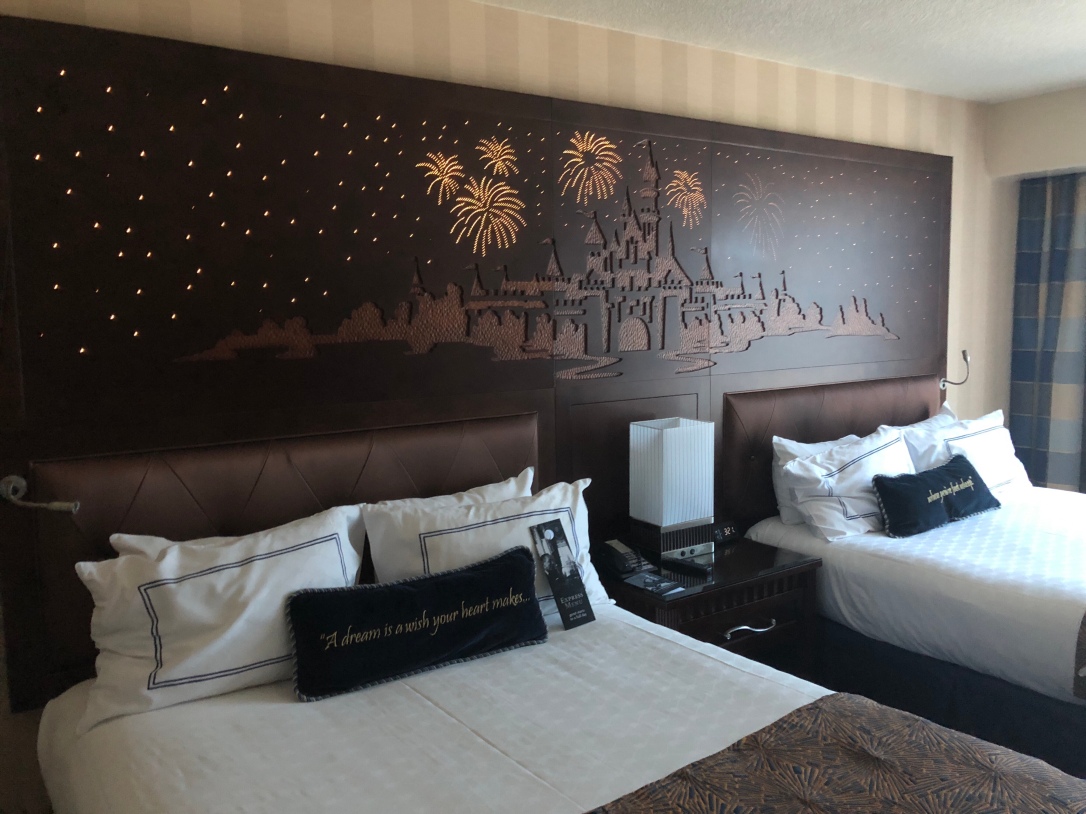 The pillows say:
“A dream is a wish your heart makes…
…when you’re fast asleep.” 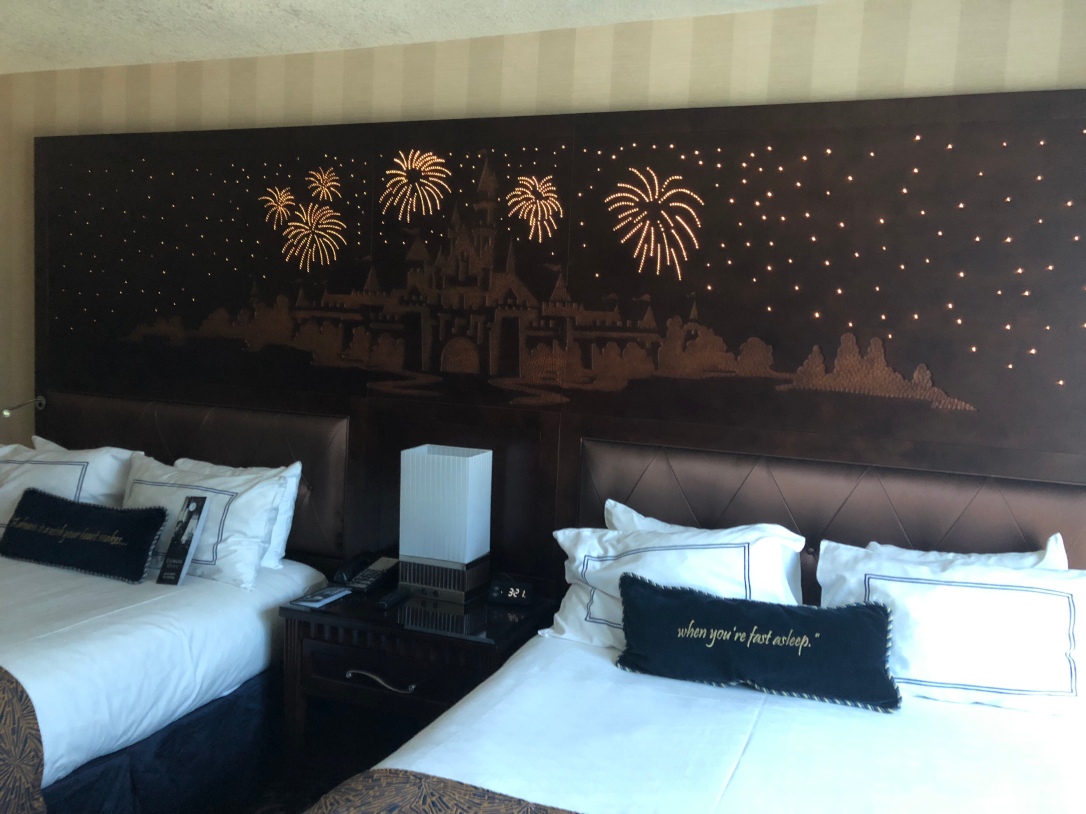 There are 3 buildings at the Disneyland Hotel: The Adventure Tower, the Frontier Tower, and the Fantasy Tower. Fantasy is the main building you walk into when you pull into the hotel. It’s home to the front desk, gift shop, and Steakhouse 55, as well as our room! We’d requested the Adventure Tower, which is physically closest to Downtown Disney and the parks, but it’s barely a difference so we were perfectly happy with our home in Fantasy.

We changed our clothes quick and ventured right back out to explore Downtown Disney.

We pretty quickly realized it was a bit warmer than we originally thought and we needed sunscreen and different clothes, so we decided to turn back. 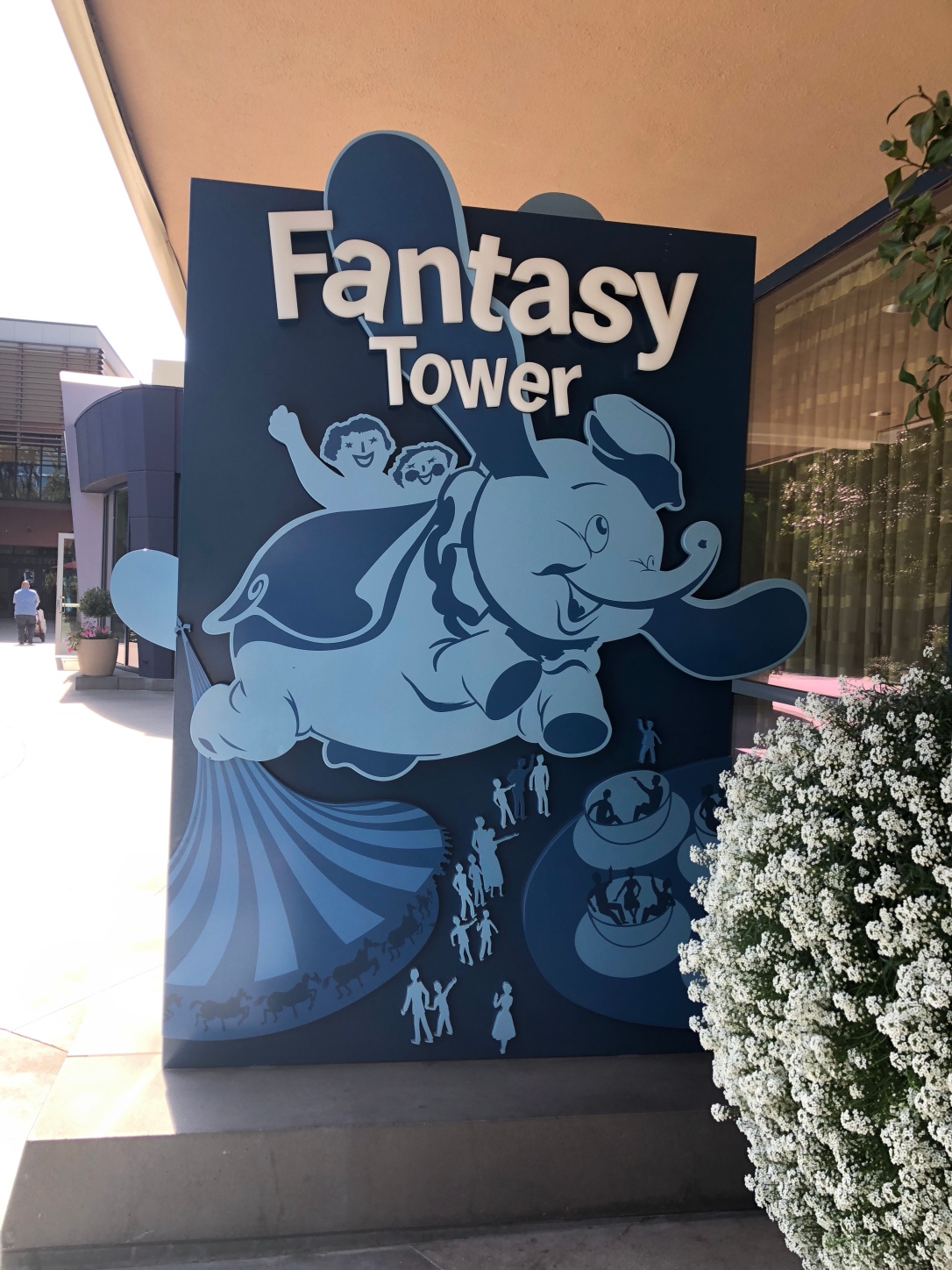 Since we’d already realized that Downtown Disney in Disneyland is much smaller than Disney World (even before it became Disney Springs) and we could cover the entirety of it pretty quickly, we decided to wander the Disneyland Hotel property a bit more after our quick change, before our 2nd adventure downtown.

Then it was back to see the rest of the shops and sights. I was dead set on finding a Millennial Pink Disneyland Spirit Jersey and I spent lots of time instructing my husband on what they looked like and, if he saw one and I wasn’t right next to him, to grab a M and L (since I wasn’t sure what size I’d need) and just hold onto them until he got to me. I was lucky enough that they over-produced them in anticipation of their popularity and there were tons! We found a little stand/kiosk that sold them so I got it right away. 🙂 It did become the joke of the trip, tho, because we saw millennial pink and rose gold spirit jerseys EVERYWHERE after that. 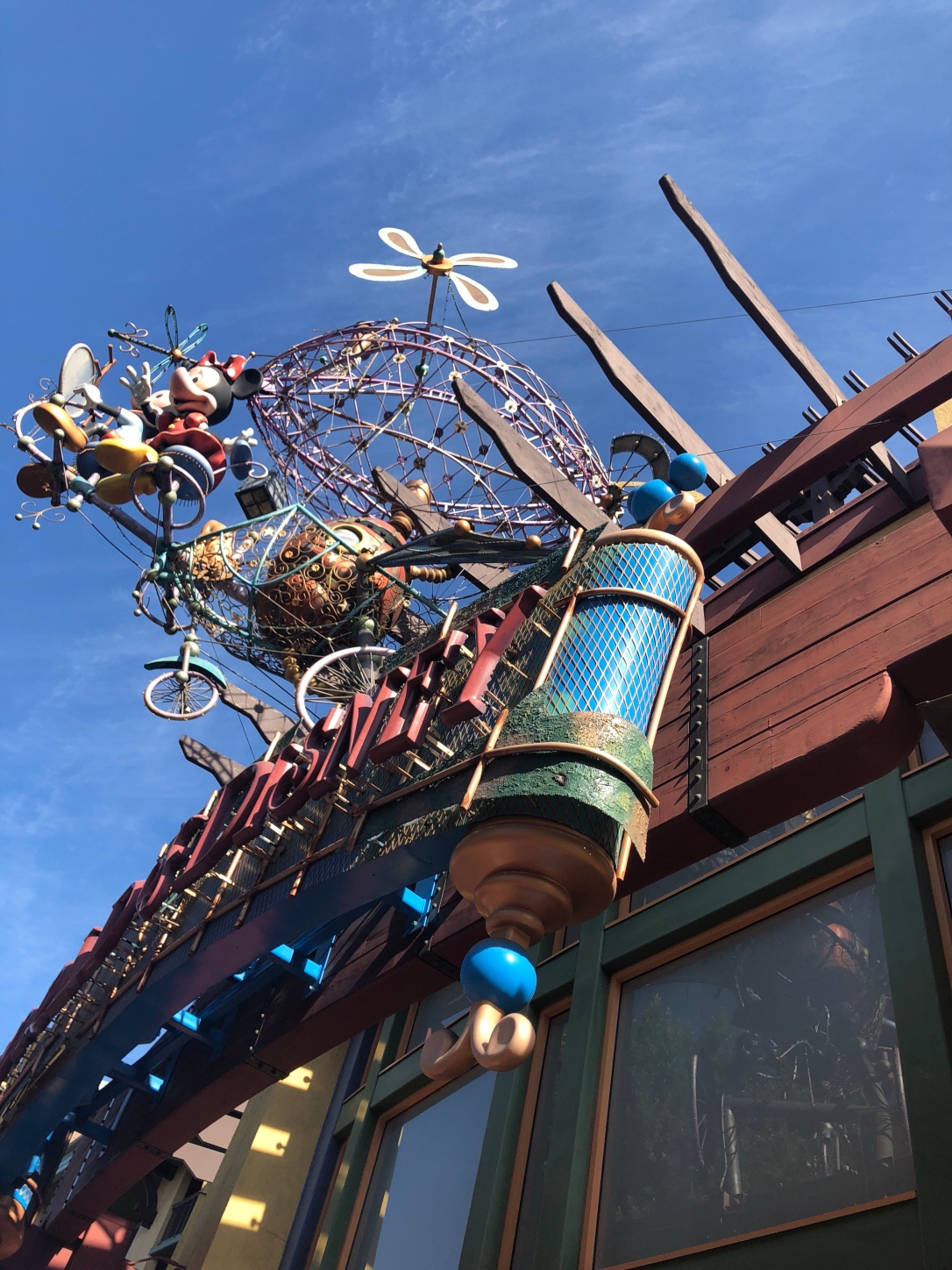 We walked all the way past the end of Downtown Disney to see the entrances to the 2 parks and I pretty much started freaking out. I started to get a little emotional, just seeing the Disneyland train station and actually started skrieking when I realized I could see Mission: Breakout.

Since it didn’t take long to give ourselves a tour of Downtown Disney, we decided to head back to Trader Sam’s for a drink and some hilarity before our dinner reservation. Bernado took great care of us with our fun drinks and we had a great time!

I should add that I have heard from some Disney World people that the Disneyland Trader Sam’s just isn’t as good as Disney World’s, but we’ve only visited the one in Disneyland and we thought it was great! 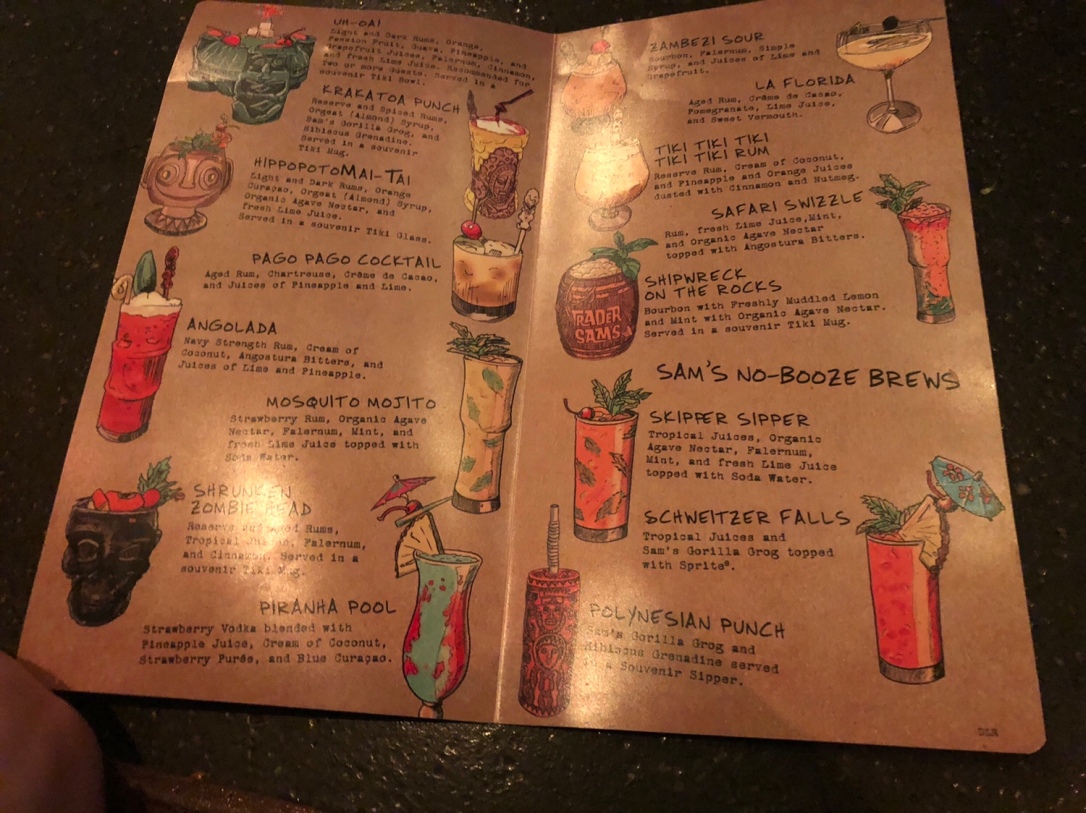 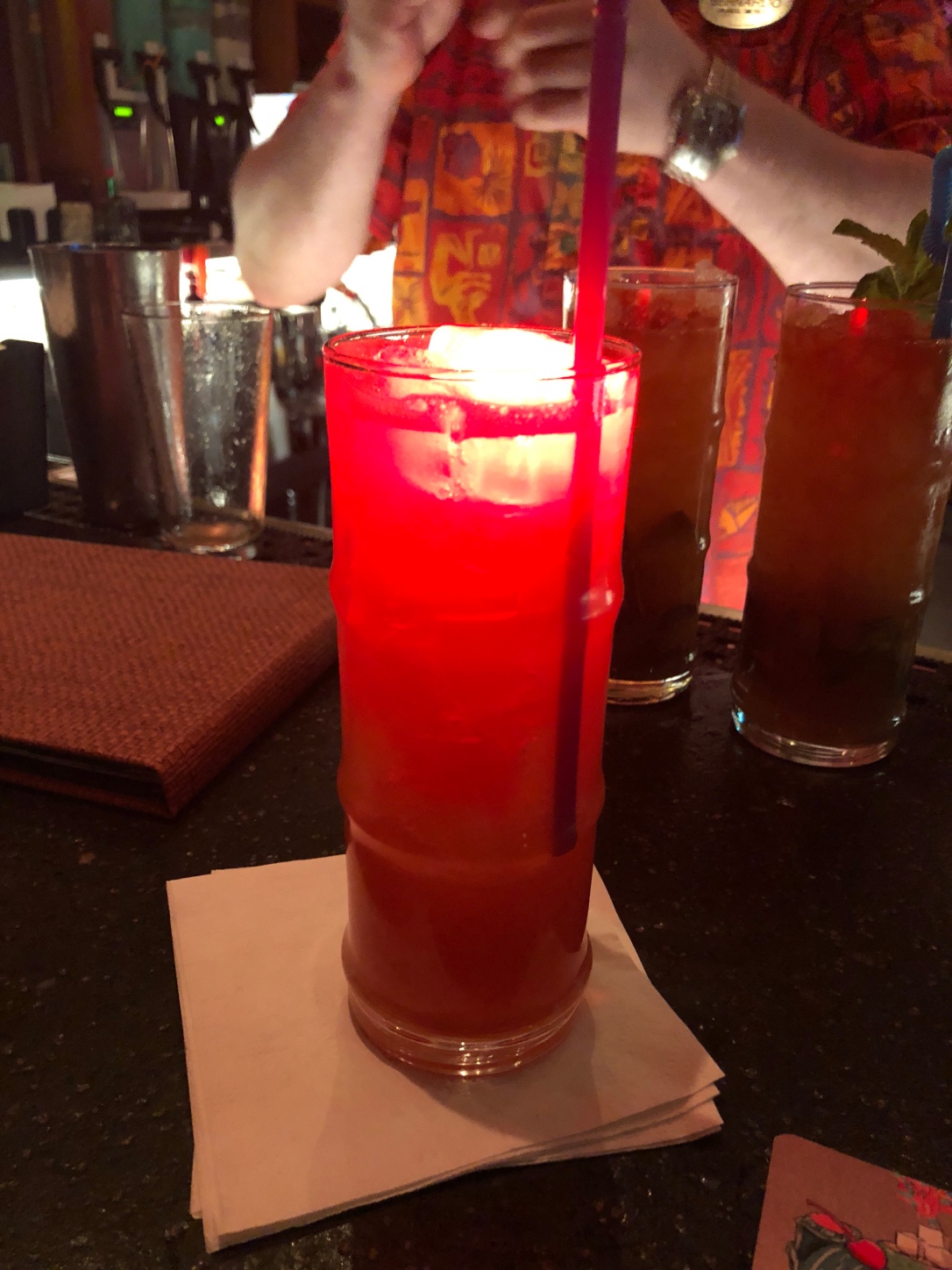 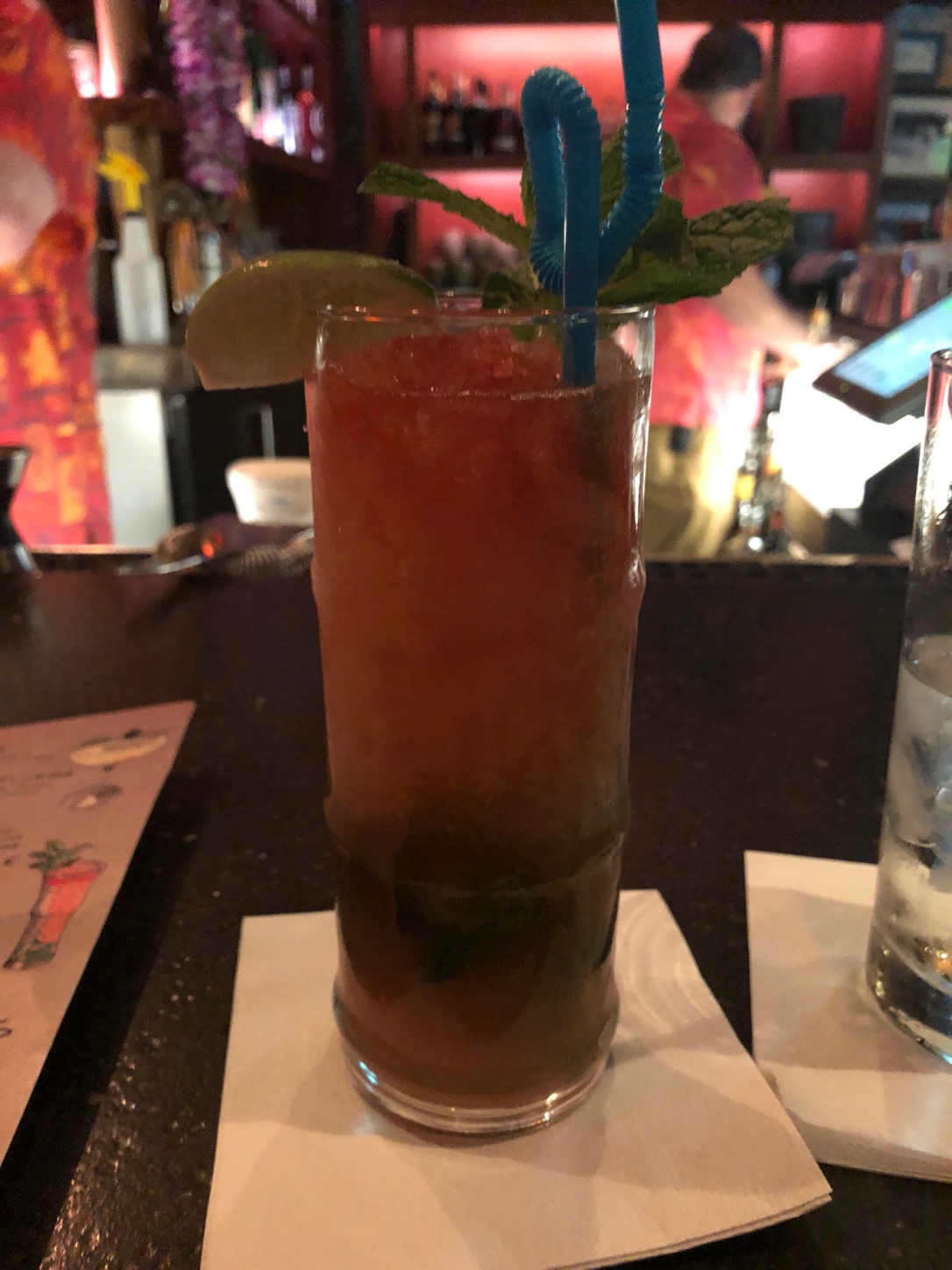 Dinner on night 1 was at La Brea Bakery Cafe! We had a table all the way at the end of the outdoor seating area, right in the corner, and it was perfect. Great place to sit back and take it all in. 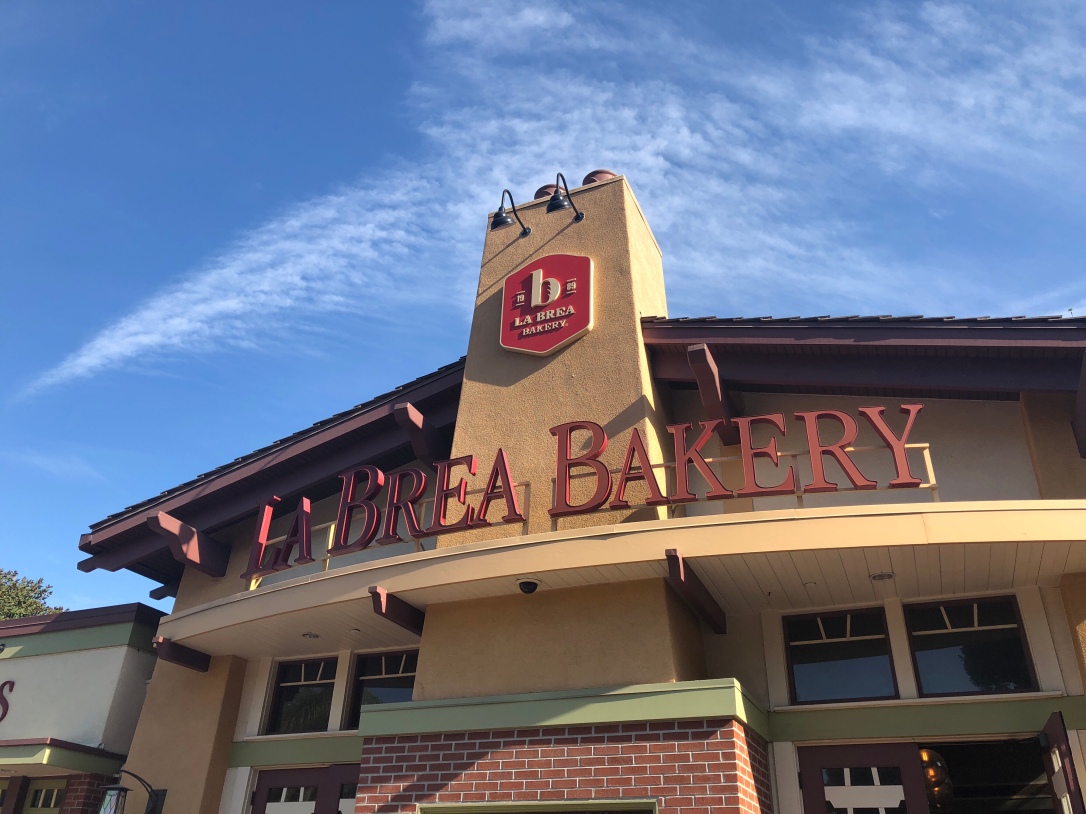 We ordered some Mai Tais as we settled into our fabulous table and checked out the menu. As native New Englanders, we were skeptical of the New England Clam Chowder Bread Bowl on the menu, but our server offered us a sample and it was SO good!! We actually ordered it for an appetizer and we completely devoured it. For dinner, I had the Montecito Salad (and added Mahi Mahi) and hubby had the Fettuccini Chicken Brandy Cream. My salad was really amazing but the hubby says his fettucini was just ok and that it needed more flavor. Overall, I think we’re both in agreement that we’d definitely eat there again. 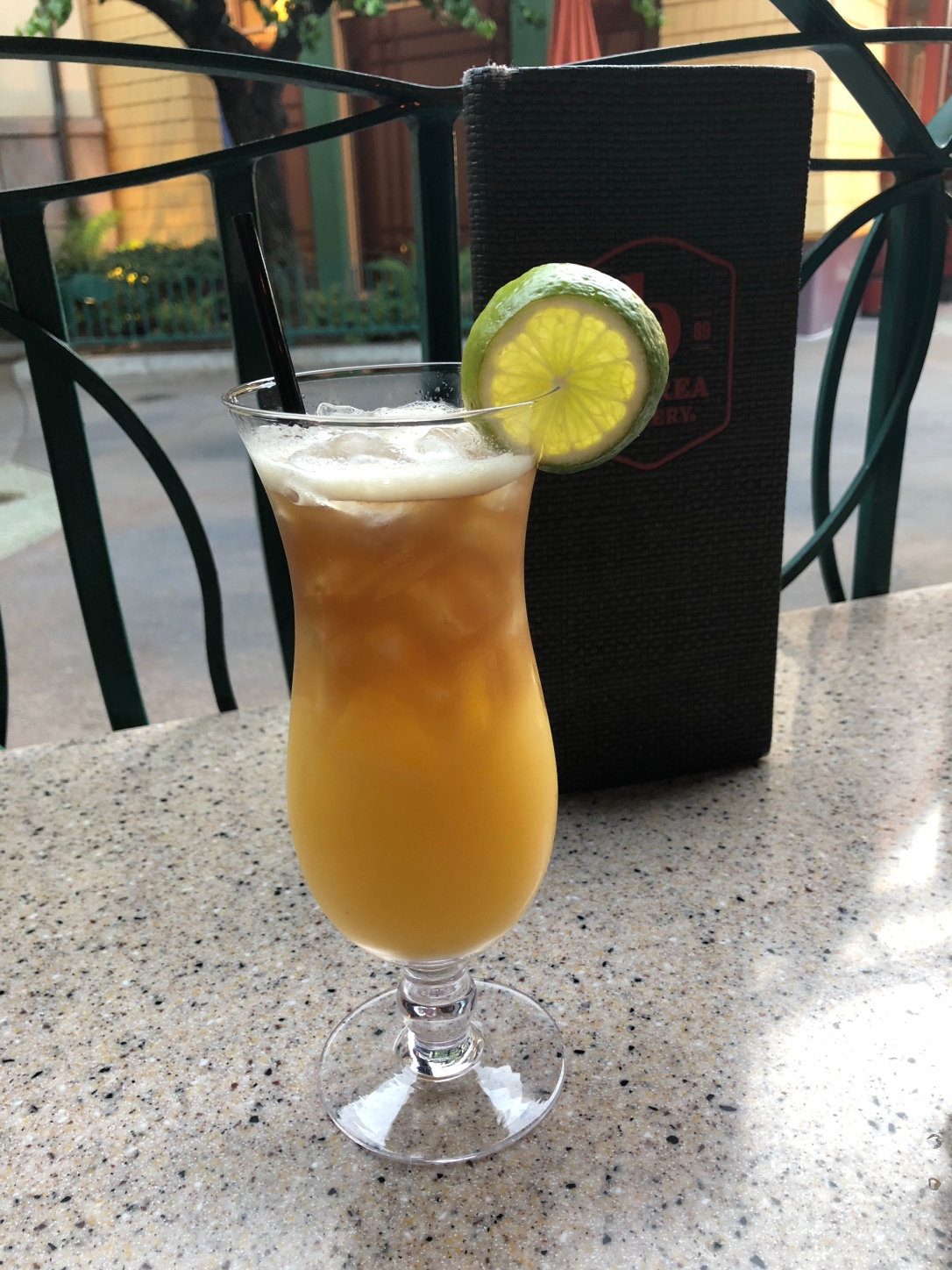 Somehow, we didn’t get any dessert, which is probably the most shocking thing I’ve ever confessed to on this blog. By the time we were done with dinner, the 3 AM wake-up, 10ish hours of travel, and 3 hour time difference were finally catching up to us, so we strolled (pretty darn slowly) back to our hotel and called it a night.

Check back next week to read about our 1st day in the parks!