Our final day in California was spent at the San Diego Zoo! It was cloudy and there was a chance of rain, but we weren’t going to let that ruin our day! It was a little chilly so we made sure to wear zip-up hoodies and I had my pack-n-go rain jacket in the backpack, just in case I needed it.

We got there around 10 AM PT and had heard we probably wanted to devote about 6 hours there. First stop was checking out the map and figuring out our game plan. We decided to head towards the koalas first! On our way, we had to get silly and take some pictures.

Before we got to the koalas, we stopped to see the Tasmanian Devil, but the little guy was hiding so I didn’t manage to get a picture, but we at least saw him and he was SO cute! The skies did open up a bit at that point so we ducked into a little shop to wait it out. I somehow managed to resist buying anything, and before long, we finally got to the koalas!

I cannot even express to you how absolutely adorable they are! All I wanted was to just cuddle them. They were all in their own trees, snoozing away. Every so often, one would stir and shift a little and go right back to sleep. We went back to see them probably 3 times because I just couldn’t get enough.

Even though we’d mapped out where we wanted to go, we pretty much just wandered without actually being sure if we were going in the direction we intended.

We wandered past some antelopes and then found the giraffes! I have always found giraffes to be so cool. They’re somehow so majestic even though they’re so big.

As we approached the zebra and donkey, we realized one of the things we liked so much about the zoo already was how close we felt to all the animals. We certainly felt safe, but they all were so accessible and se easy to see!

After the zebra/donkey duo, we found Kanga! 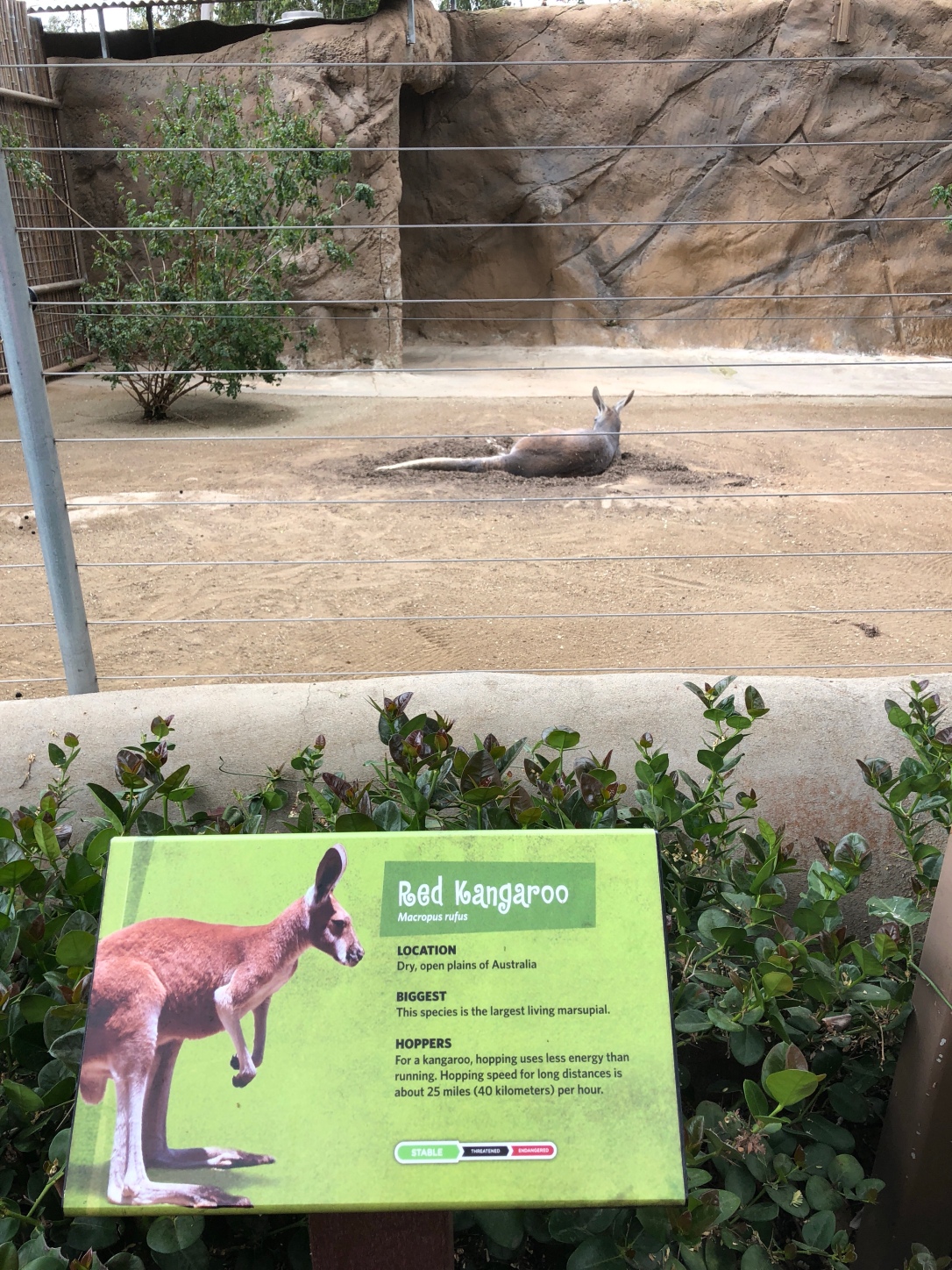 Then we found the 1st flamboyance of flamingos on our route. They were hilarious and loud and provided us some great entertainment.

After the squawking, we came across one of my favorite aspects of the zoo: a male cheetah and a female golden retriever together. They use this buddy system to help the animals adapt and keep from getting stressed. So, basically, dogs have the same effect on other animals as they do on most humans, and that completely warmed my heart.

We walked by the koalas again and then found the cutest little critters! I wish I could remember what these little guys were called but they were so cute!

There was a Serval just hanging out, relaxing, in the area behind us as we looked at the cute little guys.

I don’t even like cats, but this guy was really cute. 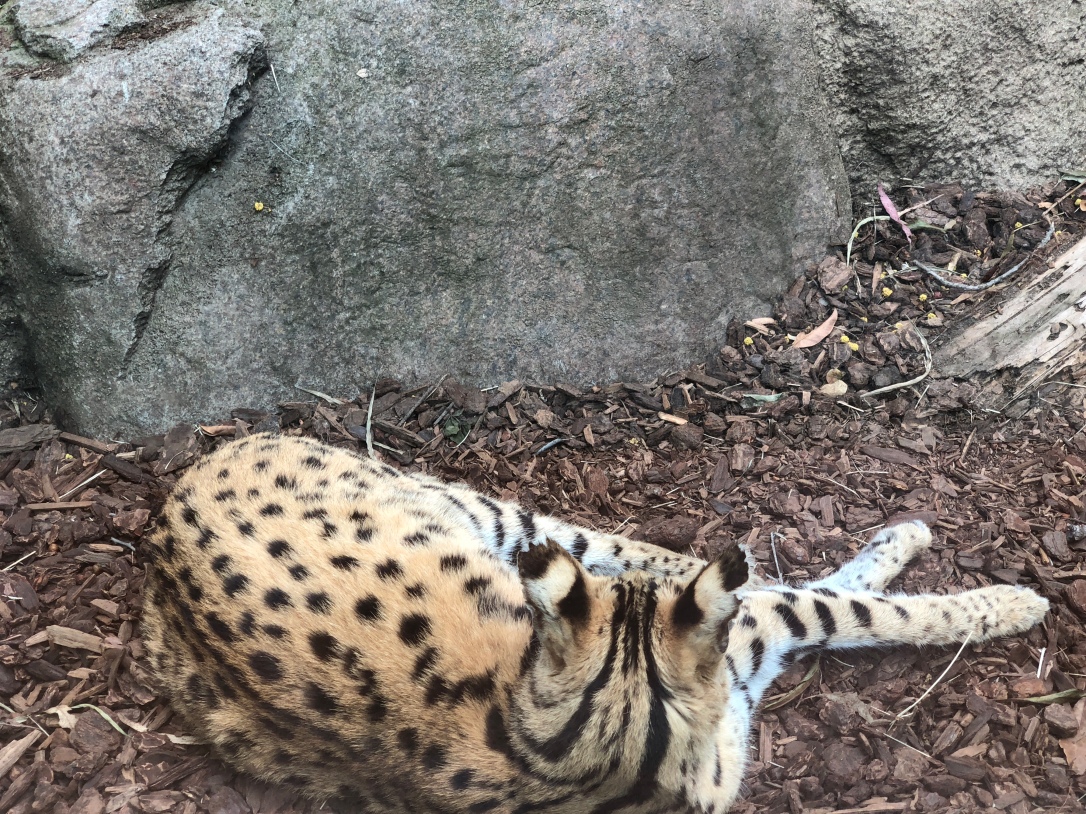 My Disney-loving heart was pretty excited to come across mere cats, and even happier that Timon is even cuter in person than he is in The Lion King. 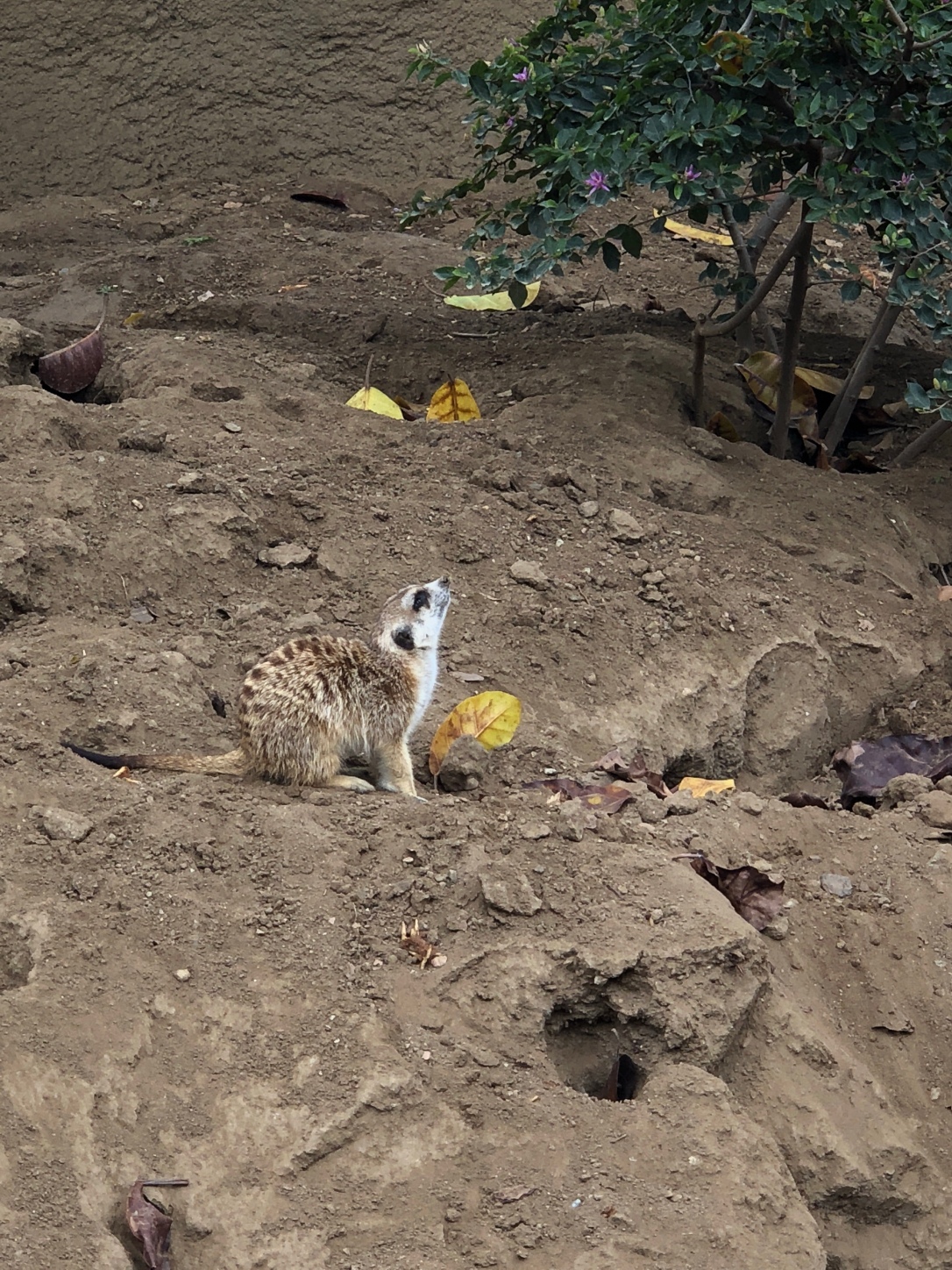 Another of my favorite aspects of this zoo is how many animals were there that I’ve never seen at any other zoo I’ve been to. This camel being a prime example of that. 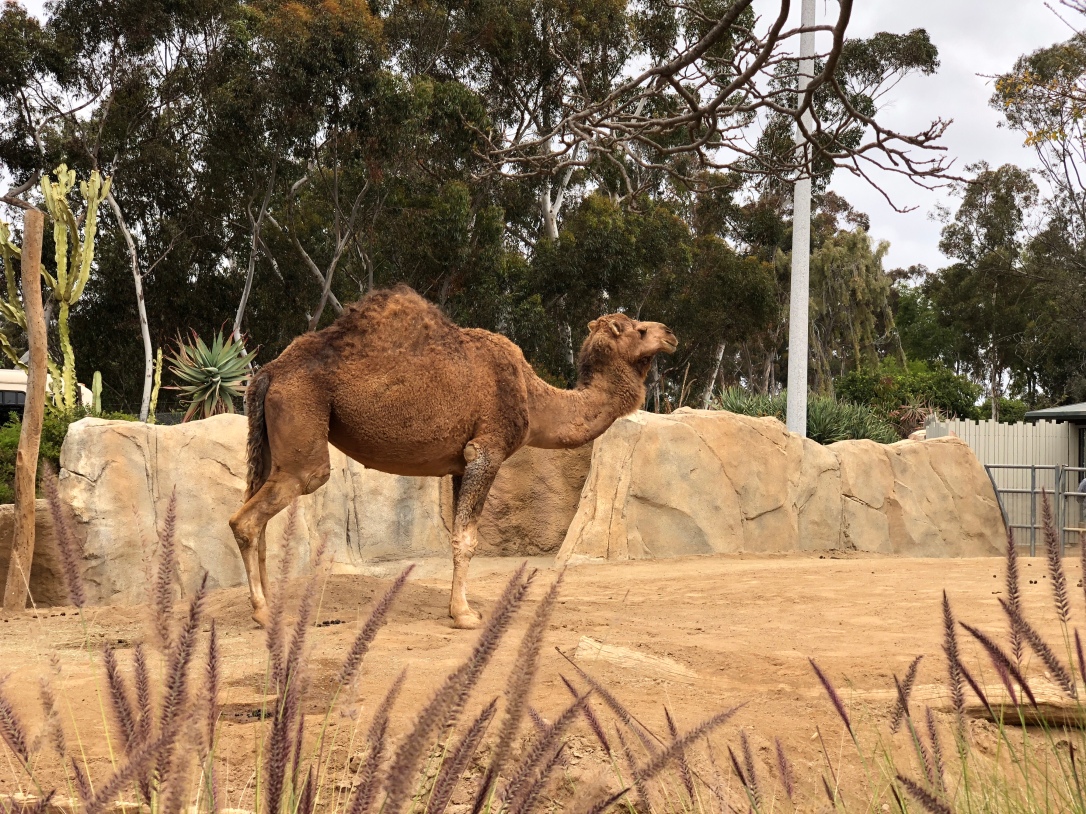 We got to see elephants, too, but I didn’t manage to get any good pictures. We even saw the matriarch getting a pedicure as we walked toward this mystery animal hubby was taken with and the magpie I befriended. 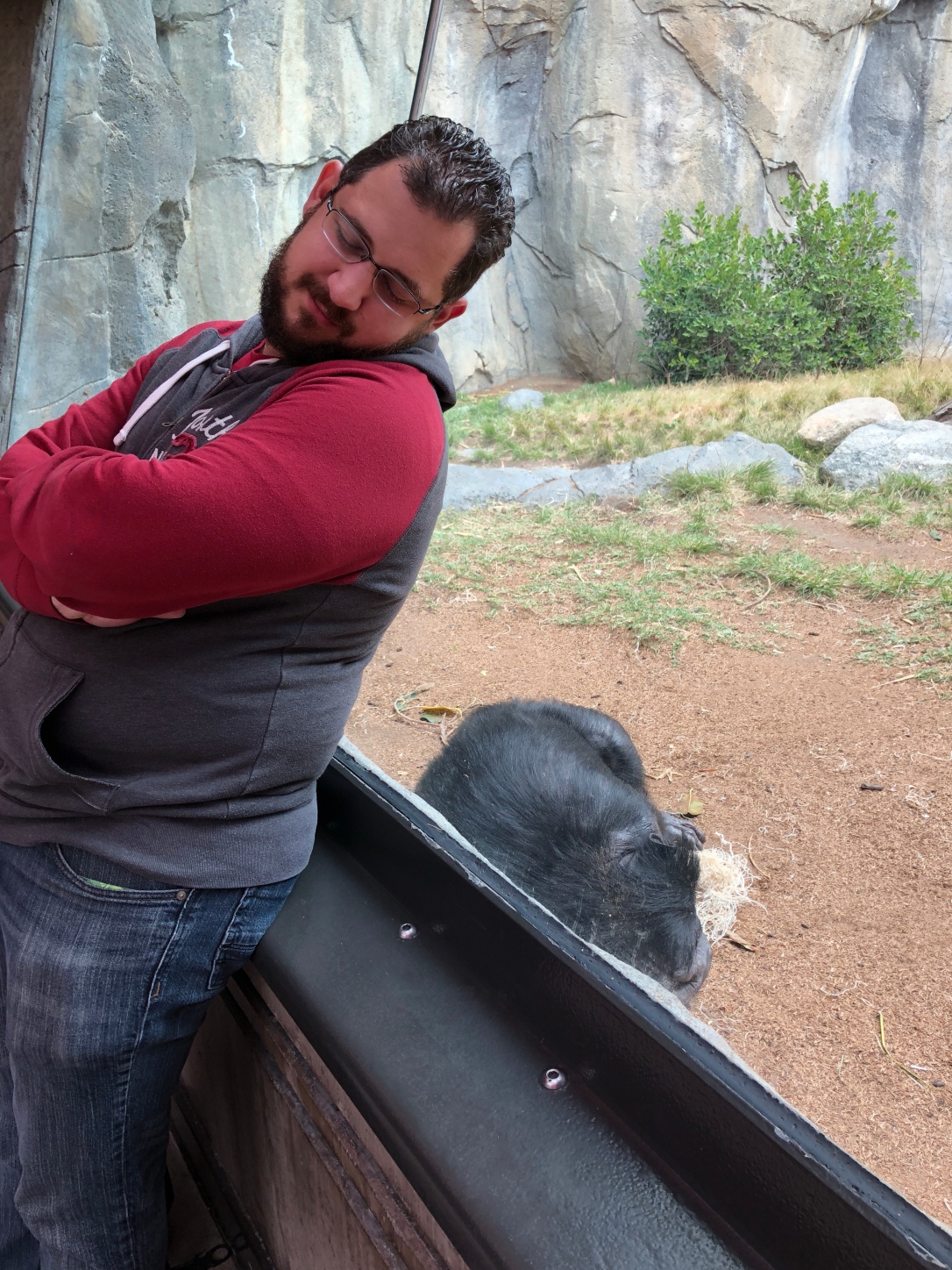 This guy flew over to the edge of the enclosure as soon as we walked up, echoed me when I said “hi”, and followed us as we walked along past its area, continually saying “hi” as we walked.

At that point, it was time for lunch. There’s 1 sit down restaurant at the zoo, Albert’s Restaurant, so that’s where we decided to go. In order to get there, we walked across this amazing, super high-up bridge, and we had some amazing views!

After lunch, we were determined to find the pandas. We’d heard our server telling the table next to us how to get there from the restaurant, so we tried to follow her directions. It was definitely not so easy or clear how to get there, but we finally found them.

I think the pandas were a special exhibit because everyone was trying to find them and they really keep you moving. You don’t really get to stand there and watch, they keep you walking, but I was able to snag a video of one of them chowing down!

We’d basically gotten all the way to the bottom, so we began the long hike up a pretty steep hill. The 1st animal we saw on our trek was another zebra, all by himself this time and with better views.

After the zebra we saw Sven! Seriously, though, it was a reindeer… 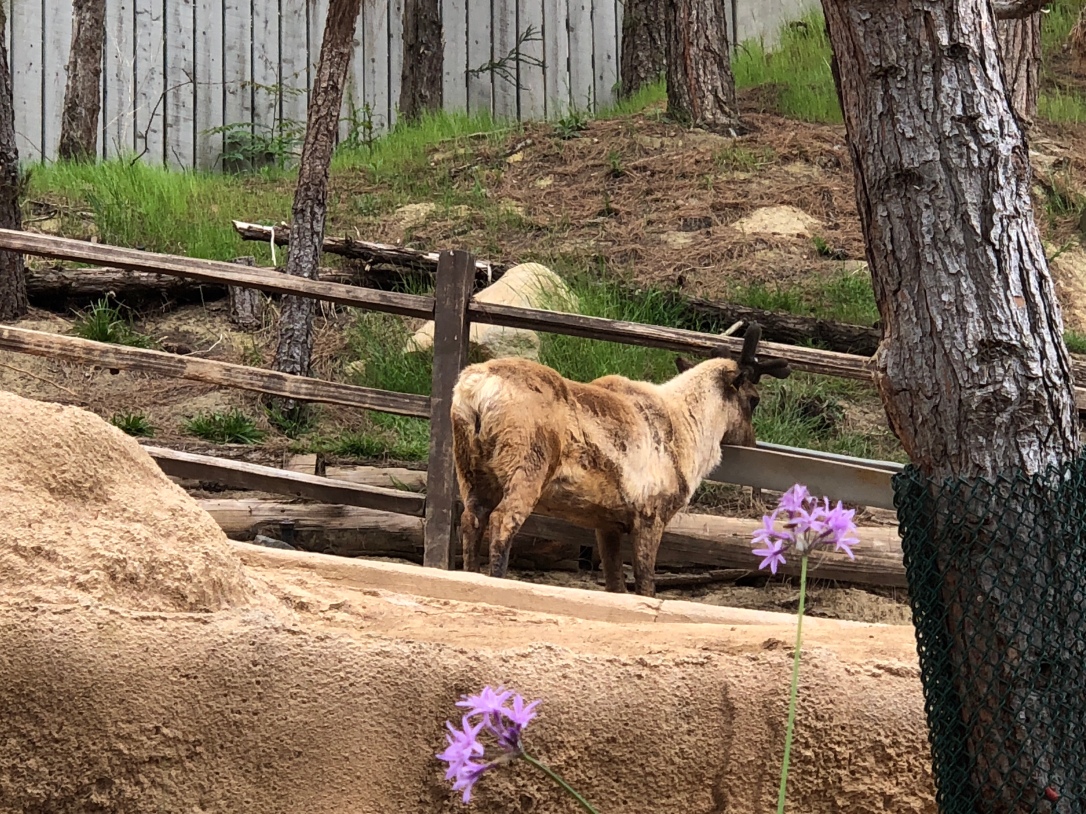 We also got to see some polar bears, which I didn’t get any photos of.

There’s a sky ride at the zoo, running from the top of the hill to the bottom, so once we were done up top, we decided to head down, fully realizing it may have made sense if we’d done things in reverse so as not to have had to hike all the way up there. But, oh well. 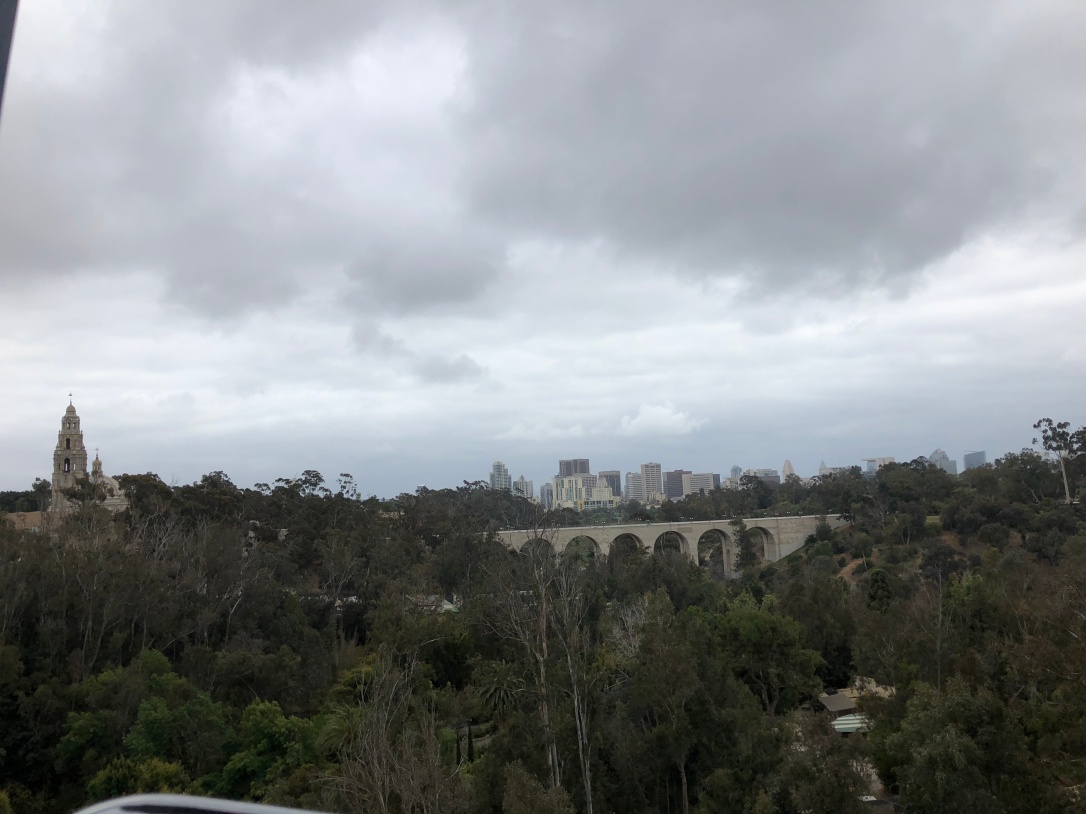 My hubby loves birds, so the little hummingbird aviary was a must! 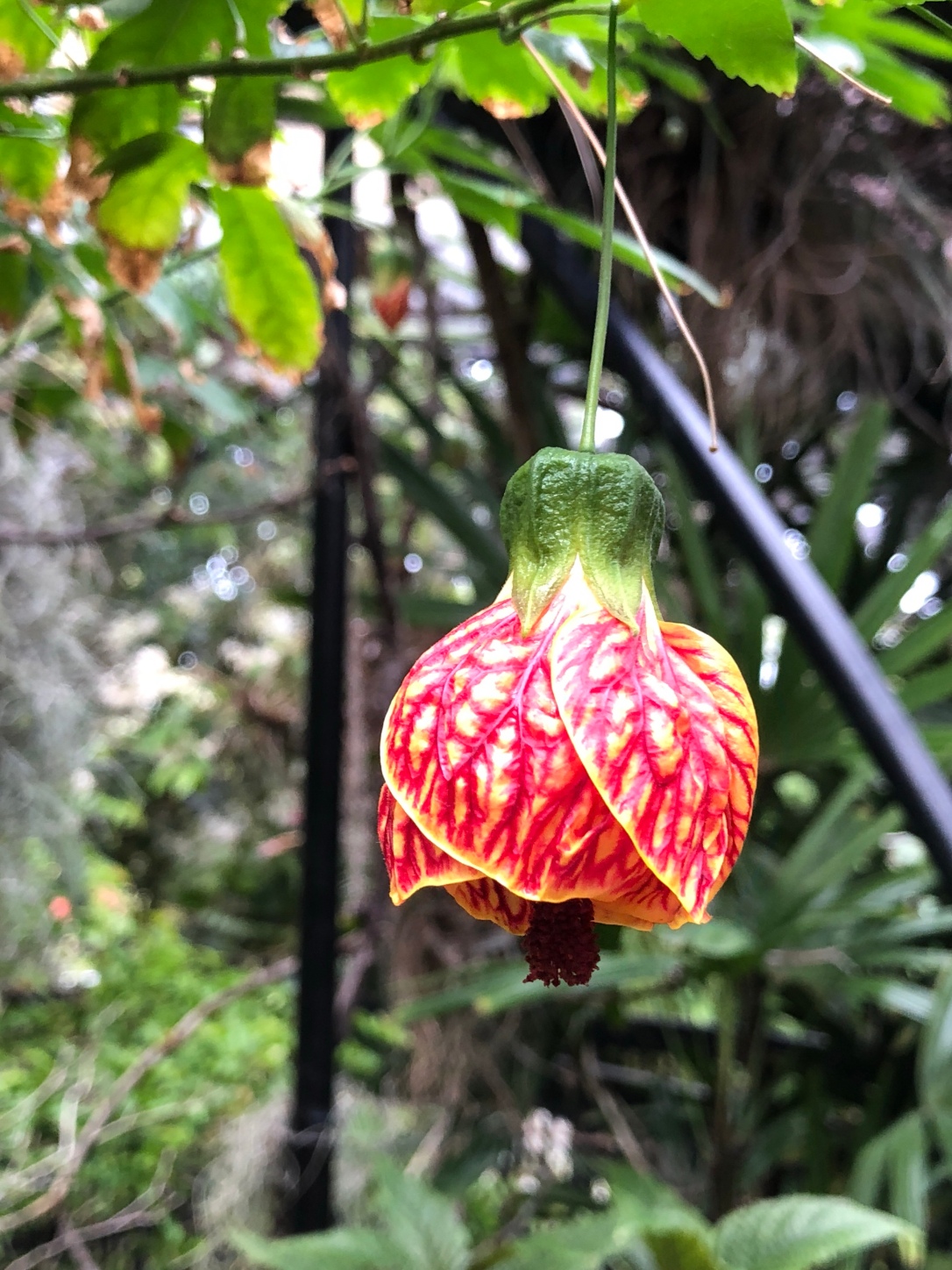 I’d somehow never seen a hummingbird in person, and have always been fascinated by them, so I was so excited when I got to see a green hummingbird right in front of me! And shortly after this guy took off, a purple one swooped in! 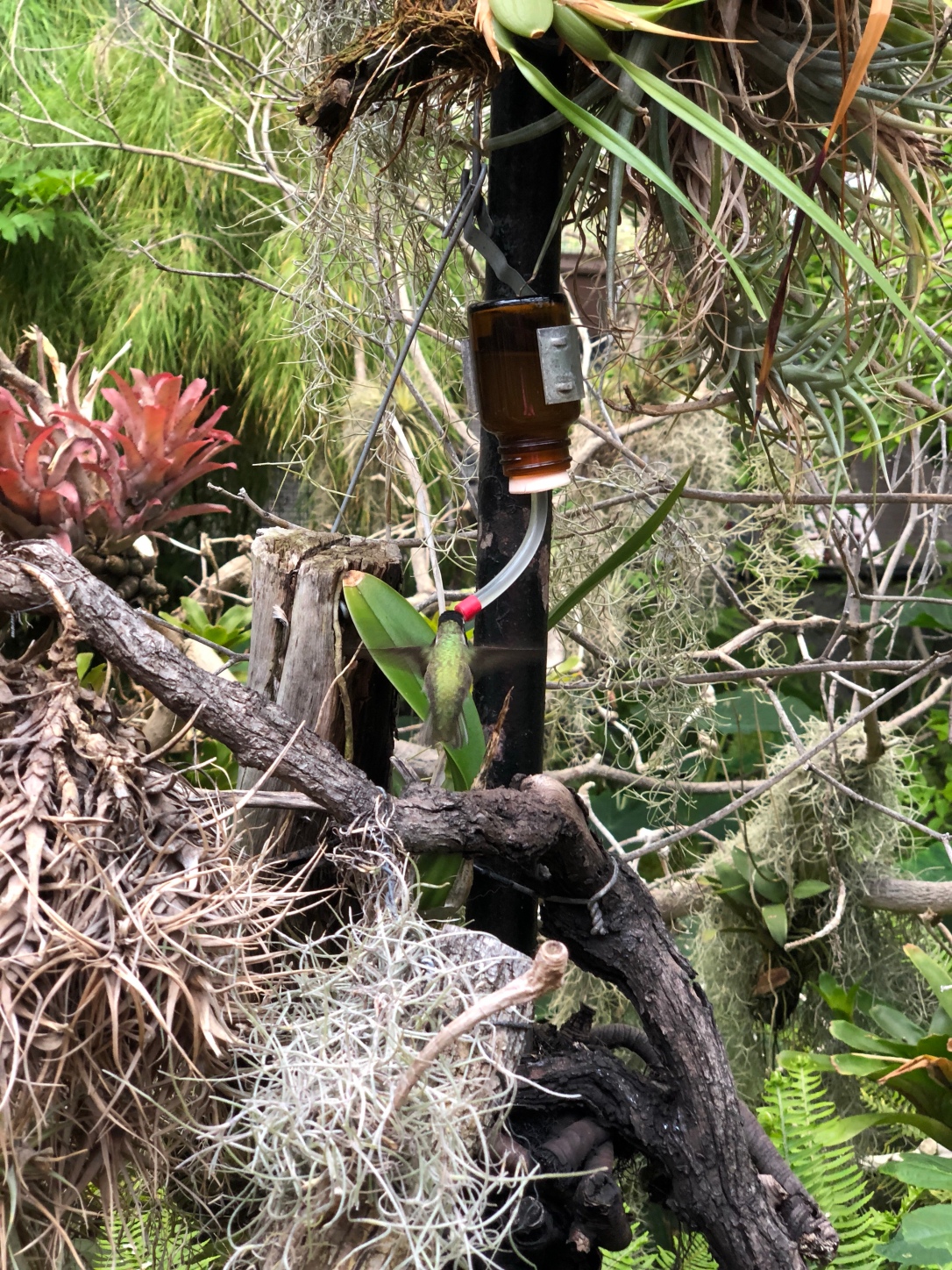 Hubby just had to pose with a lion because he was wearing his Gryffindor shirt, and the we saw a Komodo dragon! 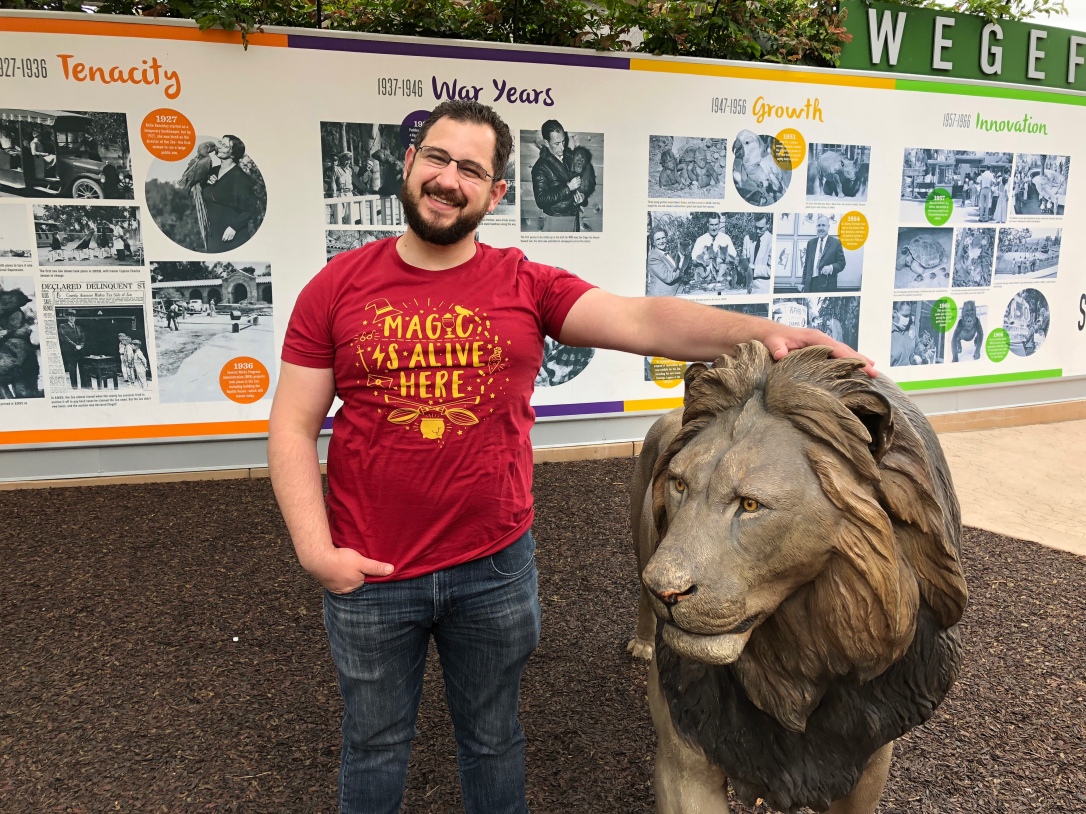 I passed on the snake exhibit, but my husband seemed to enjoy it. Then it was tortoises and more flamingos for us. I knew from the get-go that I wanted to try to FaceTime with our niece while we were there. She’s 5 and absolutely LOVES animals. I finally got the text from my mom that she was home from school, so I don’t have photos of any of the monkeys we saw or really anything else until we were done today. I will tell you that she was absolutely cracking up over the crazy, noisy flamingoes (I did get a pic right before they called). 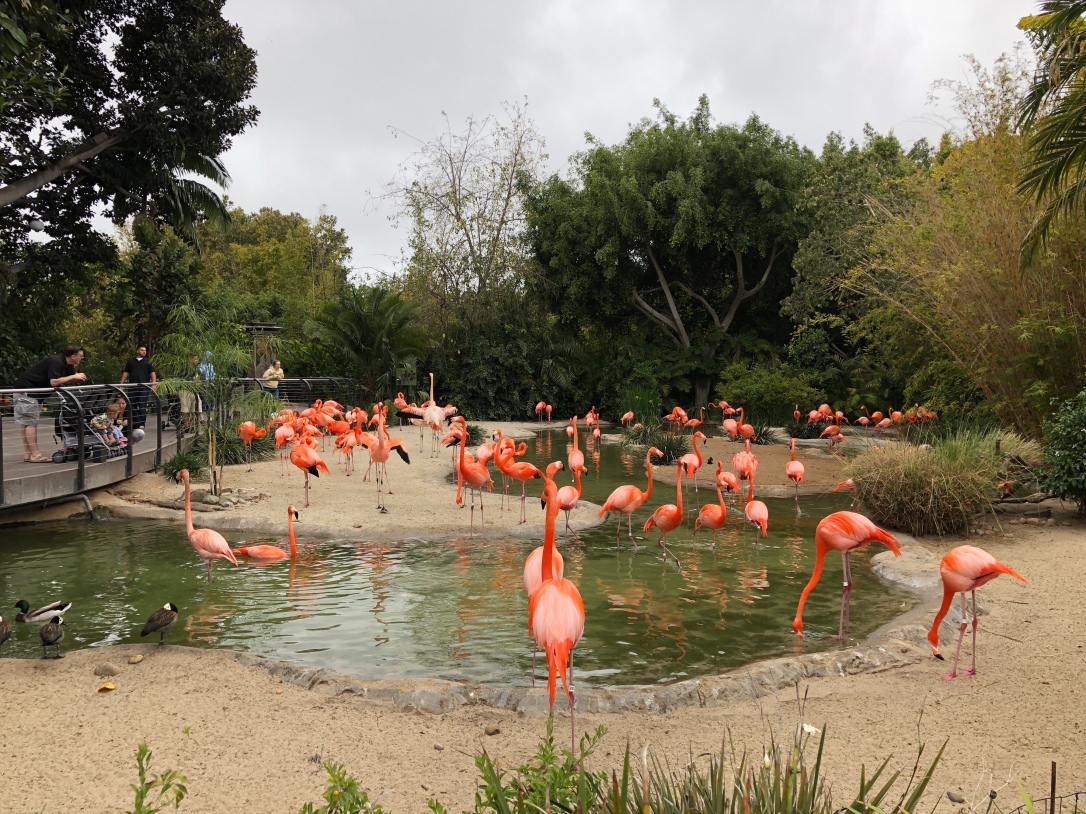 She was so beyond excited to get to see a baby gorilla. He was being very playful while we were over there, and her giggling pretty much made our day. By then, we were pretty tired and I was starting to not feel so well, so we headed for the exit. 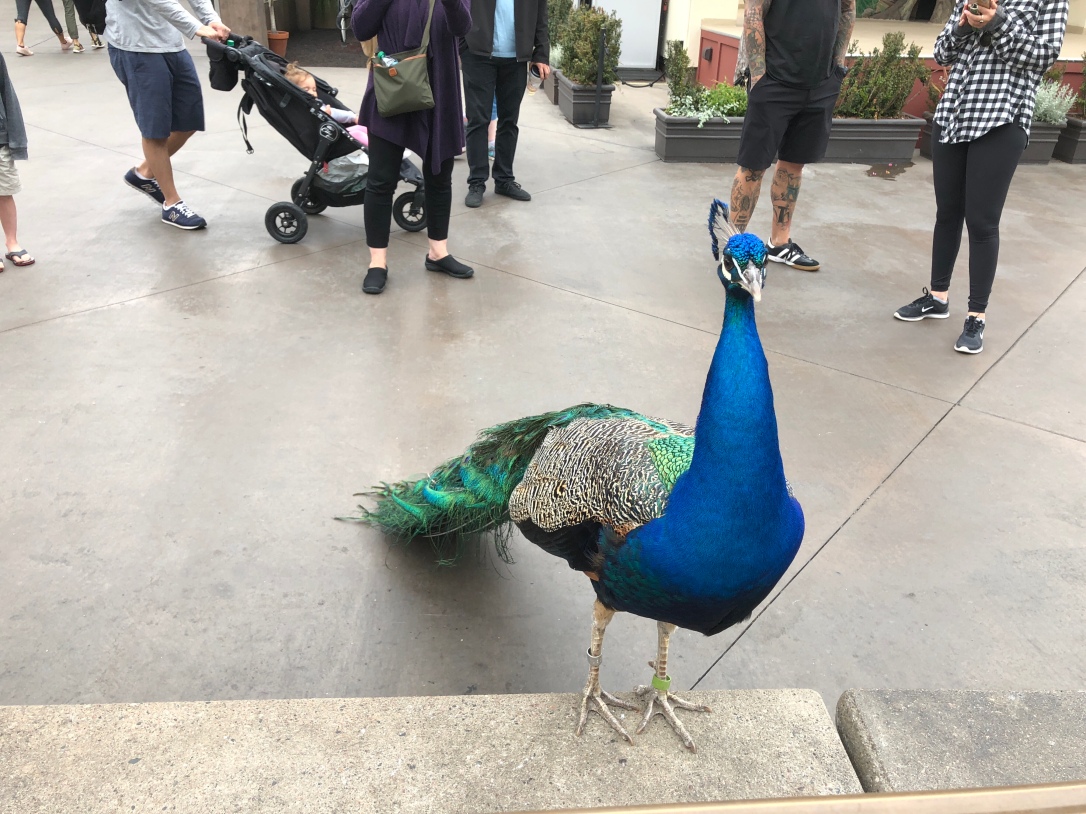 We got a little distracted as this lovely gentleman crossed our path, though. He was absolutely beautiful and not at all shy.

I am sad to report that the rest of our evening did not go as planned. We heard from a number of people that the Gaslamp District was a must, and we had reservations at The Fish Market that night. We got back to our hotel after the zoo and changed and walked across the parking lot to a bar for a beer and maybe an appetizer since we were still a few hours away from our reservation and I suddenly felt really dizzy. We ended up leaving without me even finishing my beer or food and spent most of the evening with me in bed. 😦

Around maybe 9:00 or so, I was feeling kind-of ok and in need of some food, so we went down to the hotel bar and I got some soup and actually did start to feel a tiny bit better, but I still just was not myself. I am pretty sad we didn’t have the final night of the trip that we envisioned, but it certainly didn’t change how wonderful the entire trip was.

I definitely hope we can get back to San Diego someday so we can explore more of the city, visit the Gaslamp District, and see the sea lions and sunset at La Jolla.

Check back next week for a return to the usual Disney magic.